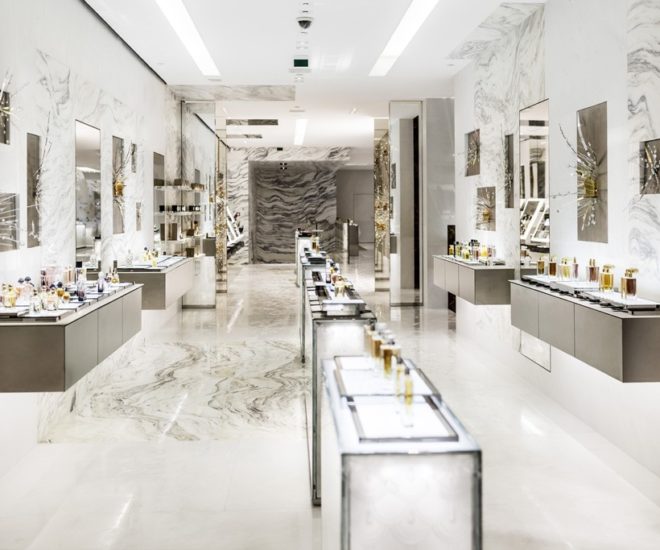 First opened in 1913, the Guerlain store on the Champs-Elysees is one of the city’s classic beauty locations and has recently been overhauled in a luxurious new renovation that opened last month. Owned by French luxury giant LVMH, the brand has spared no expense on the interiors of 68 Avenue des Champs-Elysées, which now contains a luxurious polished ceiling by the Haas Brothers and four shimmering Baccarat chandeliers.

The 10,764 sq ft store has doubled in size, with new zones including a ‘hall of mirrors’, and even contains a restaurant by Michelin starred French chef Guy Martin located in the basement called ‘le 68’. American architect Peter Marino was in charge of the rennovation. Awarded the Chevalier de l’Ordre des Arts et des Lettres by the French government last year, he is well known for his luxurious store designs for brands including Fendi, Christian Dior and Chanel among others. “I put something modern in the old and something old in the new,” Marino told WWD. “You’ll feel very much like you’re in a home and not in a commercial establishment.” An additional artistic touch was added by the golden bees (one of the emblems of the Guerlain house) suspended from the ceiling by artist Gérard Cholot as part of his installation “Le Vol des Abeilles.”