We cross the causeway to take a look at another emerging talent in Asia’s art scene. Join us as we find out more about Yeoh Choo Kuan. 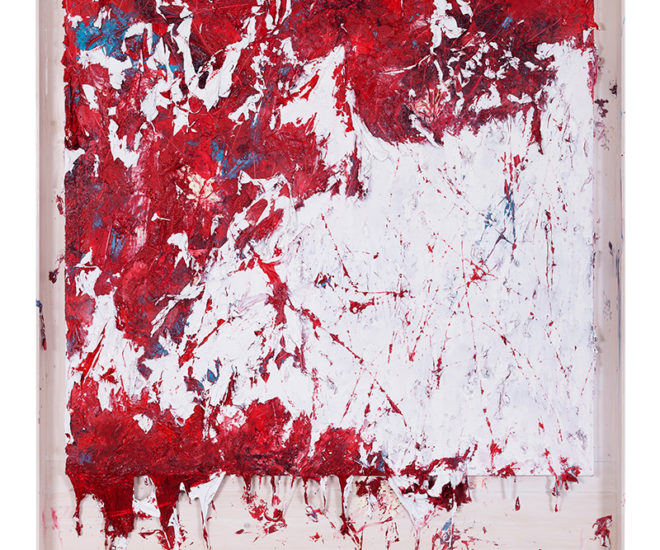 Born in Malaysia in 1988, Yeoh Choo Kuan graduated from Dasein Academy of Art, Kuala Lumpur, with a Diploma in Fine Arts in 2010. He currently lives and works in Kuala Lumpur.

Choo Kuan has exhibited widely in group shows since 2008 in Malaysia, the Philippines and elsewhere in Asia. He had his first solo exhibition, ‘Private Sentiment’ at House of Matahati Gallery in 2012, and his second, ‘In the Flesh’ with Richard Koh Fine Art in 2013, both in Kuala Lumpur. In March this year, his works were exhibited at the inaugural Art Central Hong Kong with Richard Koh Fine Art.

Choo Kuan works in the tradition of abstract expressionists. His oil and lacquer on canvas works in bold colours pulse with energy, and showcase his ability to apply and deconstruct paint in his attempt to visually represent unuttered feelings. Often paired with evocative titles, these hint at the state of mind that inspires each artwork, and invites the viewer to decipher their hidden meanings. When and how did you decide to become an artist?

I realised I might have talent in making art at the age of six. In school, my classmates used to love my hand-made ‘Power Rangers’ masks so I started to make them for everyone. From there through art school to the present moment, I decided to become an artist despite struggles and doubts along the way. I am an introvert by nature, and I think that has something to do with my decision to become an artist as well.

How has your work evolved?

My pictures are like me – often plain at first glance but full of emotions beneath the surface. While I still love my early works, they were pretty straightforward compared to the ones I am making now. My challenge and motivation from piece to piece is in seeing how I can reshape raw emotions in various forms.

Could you explain how you decide on the techniques/steps you take in creating your artworks e.g. the colours to use and what to construct/deconstruct, and how these are important to the meanings of the final pieces?

Every decision is made with an eye on the final stage, where I carry out the ‘destruction process’. So, first of all, I need to construct something good and lovely in terms of colour, composition, layering, etc. Then I try to purposely make it bad by slicing, peeling, stabbing, or whatever I can do to make it worse. I stop when it looks, in a manner of speaking, awfully gorgeous. Reminiscences Of A Deceased Me, 2015, Yeoh Choo Kuan

What are your sources of inspiration? You’ve mentioned, for instance, that the work of film directors such as Roman Polanski and Pedro Almodóvar are among them. How do their films inform your work?

I title my works based on the directors’ work and the movie scripts. The titles are not to represent the pictures but serve as clues that I provide to the audiences to wonder about after viewing the painting. One may be able to link the titles with particular movie scenes that resonate with me.

The titles of your paintings, such as ‘Embrace Me To A Pulp’ (2014) and ‘He Took Off His Skin For Me’ (2015), appear to be evocative of narratives. How do they complement your artworks?

As the poet Rabindranath Tagore wrote in his poems ‘Stray Birds’: “for its words have meaning that walks and music that soars.”

Are your artworks optimistic or pessimistic?

I would say they are pessimistically optimistic. They reflect the dark shadows of my own life that have shaped me into the person I am today, and which I have taken time to get out from.

Have you been surprised by the audience’s reactions to them?

As an artist, I create my works because of my need to visually converse, and also for the joy in seeing audiences become interested in the titles, and engrossed in the works.

Could you tell us about your experience working with Richard Koh Fine Art, including having the solo exhibition ‘In The Flesh’ in the gallery’s Kuala Lumpur space in 2014 and exhibiting at Art Central Hong Kong 2015? How has the gallery helped you to reach out to your audience?

Working with the gallery is much like playing in a jazz quartet. It is complex, spontaneous, thought provoking and always inspired by improvised harmonies. I am working on a series of paintings called ‘Made in China’, which I have literally painted in Beijing. It is about love but not nostalgia. It is about hate but not politics. It is about a Malaysian Chinese being Chinese and yet not.

Listen to the advice given by other artists without feeling compelled to follow all of it, and be confident about one’s early works without becoming too immersed in them.

This story first appeared in a different format in Art Republik.