The Surprising Story behind the Tissot Heritage Banana Centenary Edition

Curved watches were not exactly commonplace in 1917. How on Earth did Tissot manage to make the “Banana”? There are some mysteries which defy explanation like how the Pyramids of Giza were constructed. To wit, through the lenses of modern architectural and engineering techniques, one might hazard a guess as to how these structural marvels were developed and to such a degree of geometric and geographic precision. In the genre of watchmaking, one such mystery just happens to follow the Tissot Heritage Banana Centenary Edition.

The Surprising Story behind the Tissot Heritage Banana Centenary Edition

As the story goes, the Tissot Heritage Banana Centenary Edition was inspired by a vintage gold curved-case, rectangular Tissot, one owned by a Russian collector in fact. But in August 1917, the Tissot “Banana” was shipped back to Le Locle for servicing. By October that year, the Bolshevik revolution began which led to the Russian Imperial family, the Romanovs, being deposed. Eventually, the newly installed communist government instituted a ban on all “bourgeoisie” luxuries like gold watches and Russia as Tissot Headquarters in Le Locle knew it, no longer existed and the collector’s piece remained unclaimed. But this isn’t the surprising story. Consider that this was 1917. Curved watches were not exactly commonplace. How do we know this? Because in 1932, a Tissot-Omega watchmaker named Louis Alix had patented a curved rectangular case for the Omega Marine under patent CH 146310. And we also know that the he elegant curved shape envisaged by Alix would have been impossible to make at the time and challenging even today. So therein lies the first question – If a curved watch was impossible to make in the 1930s, how much more so would it have been almost 15 years before that?

Next mystery: modern curved watches cleverly use standard “flat” movements positioned precisely in the space available within the shaped case. These curved watches are possible today because evolving techniques and know-how have made movements smaller but back in 1917, the smallest movements of the era were made by Gruen – the Veri-Thin calibres were thin by standards of that period, featuring new wheel-train architecture which enhanced its thinness. By 1938, what Tissot-Omega’s watchmaker had dreamed of had become a possibility for Gruen due to the advancements in ultra-thin calibres.

Left: Imagined illustration of Tissot “Banana” from the era. Centre: Louis Alix’s patent for a curved case, which was impossible to machine in 1932. Bottom left: Gruen Veri-Thin calibre evolution. Right: How a calibre would fit in a curved case circa 1938.

Therefore, we can infer that whatever watchmaking know-how that Tissot possessed in 1916, it would have been advanced for the period. However, assume that proportions of the original Tissot ‘Banana’ were large enough to incorporate a standard 10 lignes pocket watch movement, it still doesn’t explain the challenging process of making a curved case with prevailing technology of the time.

Mysteries aside, the Tissot Heritage Banana Centenary Edition commemorates the voyage that took place 100 years ago. With the advent of modern machining techniques, the curvature of that iconic watch is no longer much of an enigma. Bearing the same ‘banana’ shape as its famous ancestor, the Heritage Banana curves around the wrist, benefitting from the diminutive stature of 2.4mm ultra-thin quartz movement (which fits within the curved case of course). 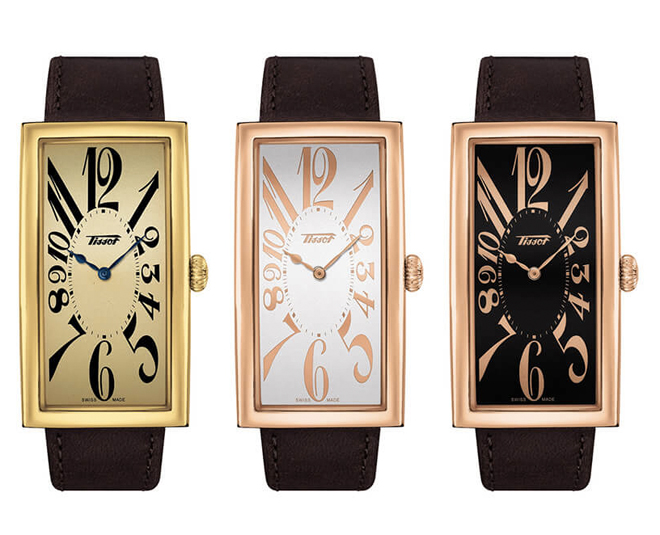 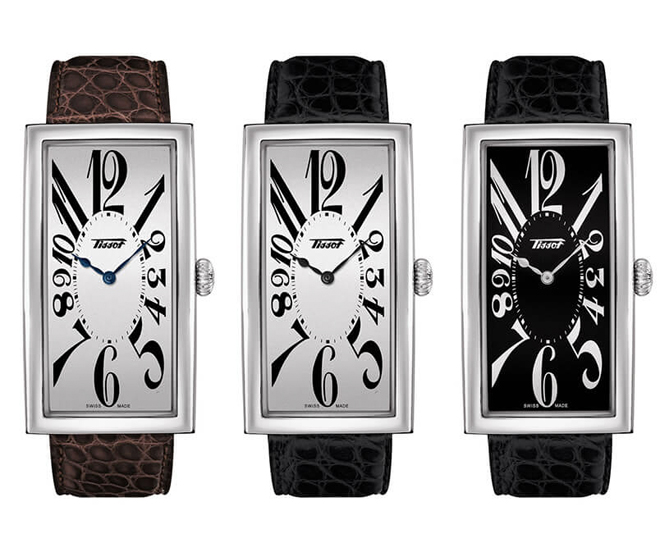 Aesthetically speaking, the audacious, pre-Art Deco design embraces both the lines of the watch and of the numbers, with their varying size cleverly fitting them into the dimensions of the slim, rectangular dial. The delicate bleuté hands stay true to the original version, to which the Tissot Heritage logo on the dial testifies. A finely textured crown represents a common signature of elegance. These timepieces magically recapture the mood of a bygone age. Most importantly, as far as historical references are concerned, the provenance of the Tissot “Banana” will give you one heck of a story to tell.