Before the launch of the Baselworld 2017 Tissot Heritage 1948 Chronograph, Tissot’s last heritage chronograph re-issue took place almost 15 years ago. It was in 2003, during the brand’s 150th anniversary celebrations that watch cognoscenti was reminded of the brand’s incredible provenance. We mention this because that particular model, the Tissot Heritage 150th anniversary Chronograph is actually a heritage re-issue of a highly collectible 1946 Tissot chronograph from the era.

Watch savants might recall that in 1930, Tissot merged with Omega, giving rise to a slew of Tissot-Omega badged watches and chronographs. By 1932, famed chronograph movement maker Lemania joined the group. Vintage chronograph models produced by Tissot during the 1930s and 1940s incorporated Lemania calibres like the CHT15 column wheel chronograph movement accounts for some of the shared commonalities; this is an editorial digression which serves to deliver our next point – the importance of nostalgia and romance when it comes to vintage re-issues, but what makes these watches extra compelling is the element of provenance and the joint relationship between the two brands.

It is this shared history which led some collectors to believe that 1960s and 70s Tissot chronographs like the Ref. 1281 used Omega 321 calibres due to the positions of the subdials (there is some truth to this but not in the way that is commonly misunderstood). The fact is, the Tissot 1281 chronograph used a manual wound Lemania 1281 or Tissot 871 cam-actuated chronograph movement which supported lower manufacturing costs.

That said, while early Speedmasters used column wheel chronographs, the relationship between the two brands ultimately led to that Tissot movement being developed into the 1873 which eventually became used in Omega Speedmasters. It’s a point of horological trivia which some watch lovers feel adds to the allure of vintage Tissot chronographs; and some of this desirability (inspired by provenance) transfers unto the modern Tissot Heritage chronograph re-issues. The heritage re-issue is a trend that has been deeply mined in the last five years. At best, a vintage watch is deeply evocative and if a modern edition inspired by that history is ill-conceived, these attempts can backfire badly. Thankfully, with their newest attempt, the Tissot Heritage 1948 Chronograph, it is safe to say that the brand has been fairly skillful and respectful with their approach towards “commercialised” nostalgia.

In 2006, Tissot supported a spy-satire period film called OSS 117: Cairo, Nest of Spies. Starring Jean Dujardin (he eventually won the 2011 Academy Award for The Artist), the film was set in 1955 following the exploits the French secret agent Hubert Bonisseur de La Bath or Agent OSS 117 (an obvious spoof of 007), as he is sent to Cairo to investigate the disappearance of his best friend and fellow spy Jack Jefferson. The titular OSS 117, played by Dujardin, was equipped with a special timepiece – a Tissot Heritage 150th anniversary Chronograph. It was a fitting bit of equipment and given its period authenticity, the chronograph became the watch which acquainted a new generation of watch consumers with Tissot. That particular chronograph and the re-issue which followed 14 years later, the Tissot Heritage 1948 Chronograph is both descended from the fore mentioned 1946 model and the design elements are truly distinctive.

It differs from the original at two points. First, in terms of case proportion, the vintage Tissot chronograph was 36mm but the contemporary edition stays faithful as a gentleman’s chronograph with 39.5mm stainless steel case proportions. Increasing its appeal, however anachronistic, is the 1970s style Milanese or shark mesh bracelet that comes as an additional strap option for the Tissot Heritage 1948 chronograph. The twisted lugs, emblematic of the vintage edition also makes a return on the modern re-issue, adding some visual flair to the case. That said, it’s not an integrated chronograph movement which drives the Tissot Heritage 1948 chronograph but rather an ETA 2894-2, essentially a base 2892 automatic movement with chronograph module, accounting for its 11.9mm case thickness – as a result, it is not particularly slim but by chronograph standards, not particularly thick either.

The opaline silver dial with mirror polish framed subdials, protected by period authentic Hesalite, upsell the monochromatic appeal of the 50s and 60s before the 70s high contrast “panda” rage. The large applied “XII” at 12, heritage Tissot branding, concentric circles within the subdials, applied dot markers for hours and the minute track on the dial’s periphery are the only details which greet you – adding to its minimalist appeal – there’s not enough to distract you but enough to keep things interesting. It’s the 50s remember? An age of elegant distinctiveness. The other anachronistic element is a small date aperture between 4 and 5, a necessity. Overall, it is hard to deny the vintage charms and dressy appeal of the Tissot Heritage 1948 chronograph. 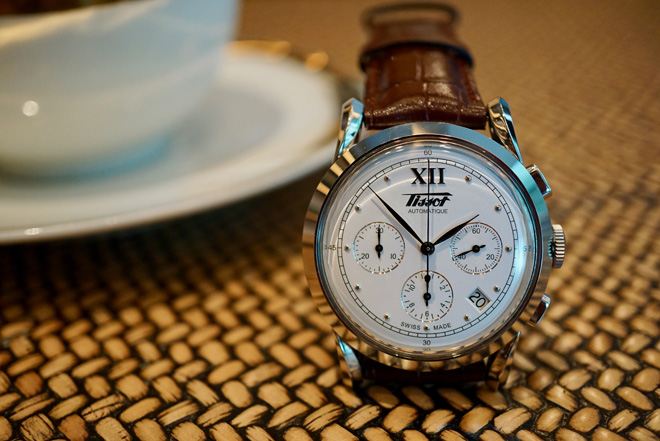 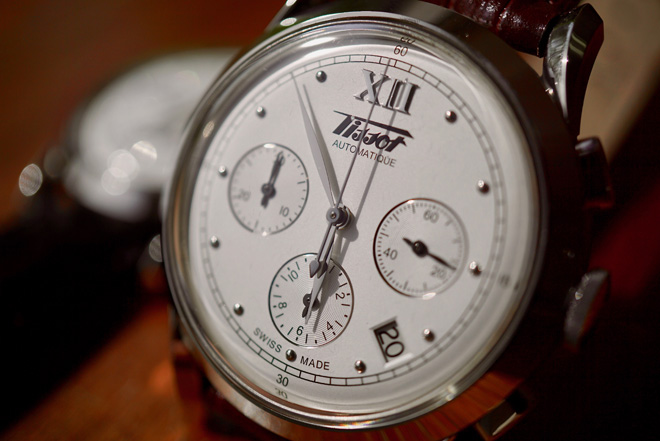 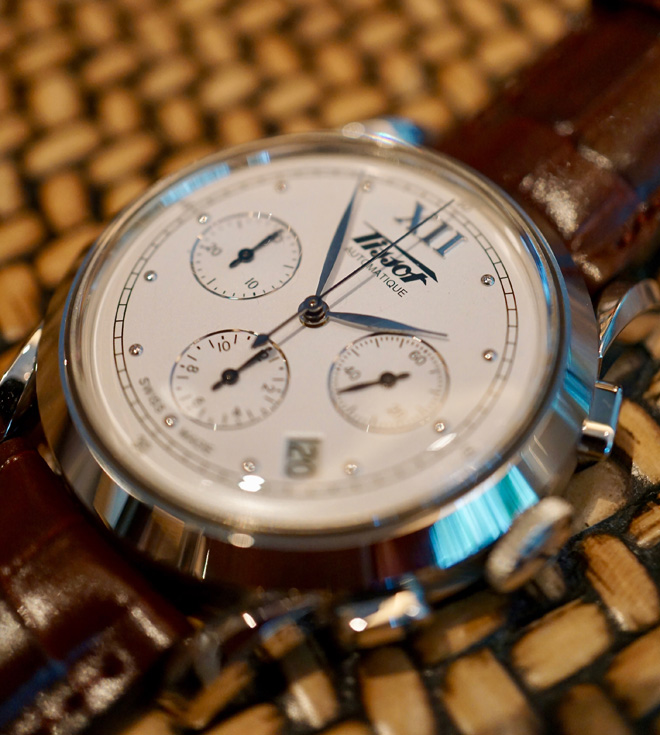 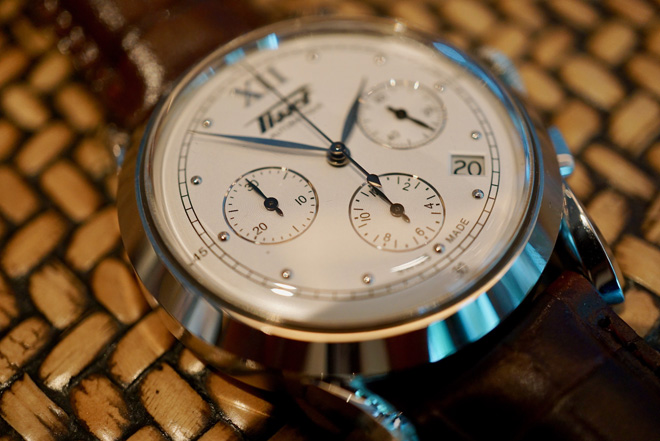 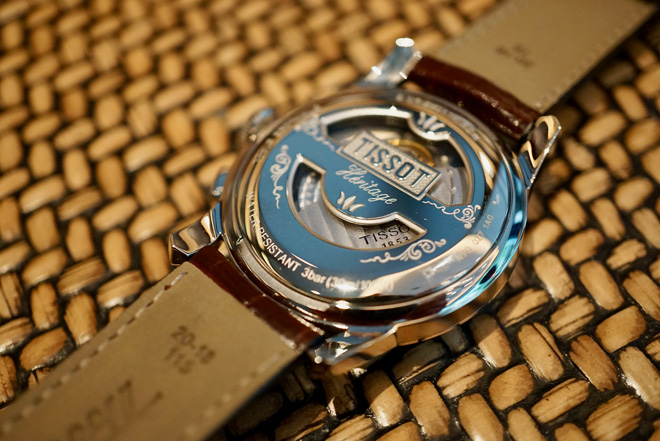 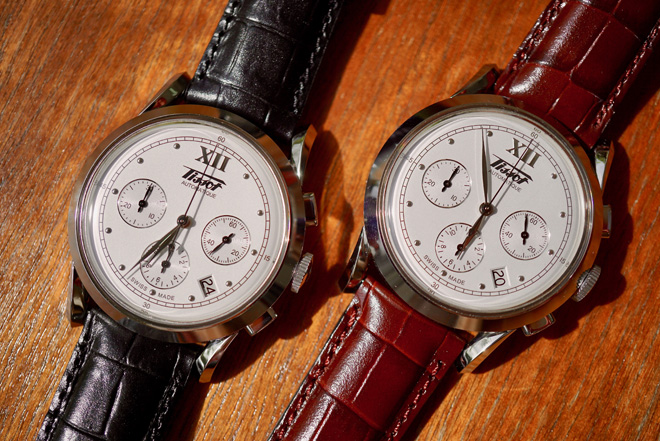