Just why are Lange & Sohne watches so Beautiful? Here’s the secret to good design

Timepieces from A. Lange & Sohne have undeniable appeal and Anthony de Haas, Director of Product Development, finally lets us in on the secret of its siren attraction 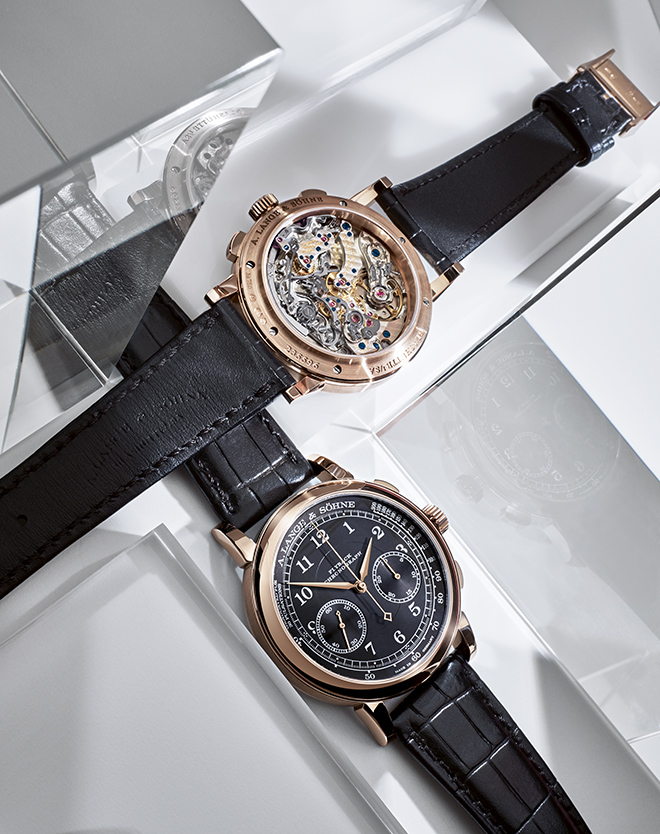 Just under 25 years old since its phoenix rising, A. Lange & Sohne is a relatively young name which has established a signature aesthetic so emblematic of its brand that it remains one of the few marques that can be identified from the watch face alone. Its most iconic model? The Lange 1, incidentally the model which launched with the brand’s resurrection, was actually conceived from the dial first.

Speaking to Anthony de Haas in Geneva’s Palexpo, Director of Product Development, he confessed that the Lange 1 was one of the rare instances in the brand where function followed form. Conceived as a dial first by Günter Blümlein and Reinhard Meis, the Saxony manufacture then designed a calibre around the indications of the dial. 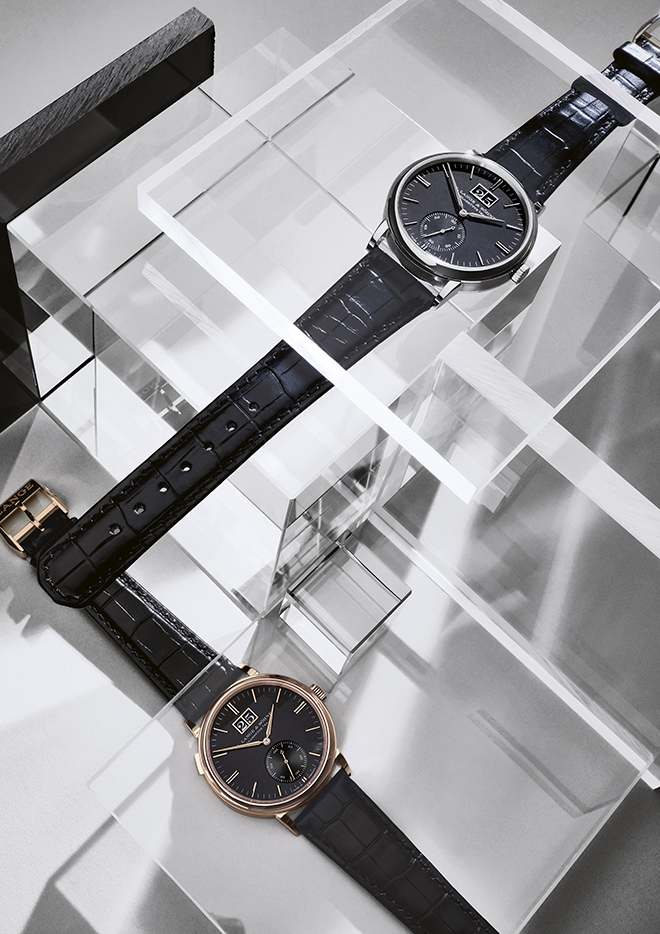 Just why are Lange & Sohne watches so Beautiful? Here’s the secret to good design according to Anthony de Haas, Director of Product Development

The jovial 50-something Dutchman studiously meticulous despite his casual manner. While he’s cognisant that Lange is currently reputed among connoisseurs for its intense devotion to movement decoration, he’s quite excited to get you to look beyond the German silver three-quarter plate, distinctive gold chatons, memorable blued screws and the unmistakable hand engraved balance cock. In terms of design language, de Haas attributes a lot of the unspoken, unpublicised concepts to the visionary Blümlein.

According to de Hass, “Blümlein, Klaus (Kurt) and Meis actually gave us blueprints for the fonts for the sole purpose of being both classic yet undeniably contemporary. Every Lange timepiece from that point was conceived with every single detail in mind,” he adds, “the kerning and leading had to be just so, because everything was centred around the iconic outsized double date display.” 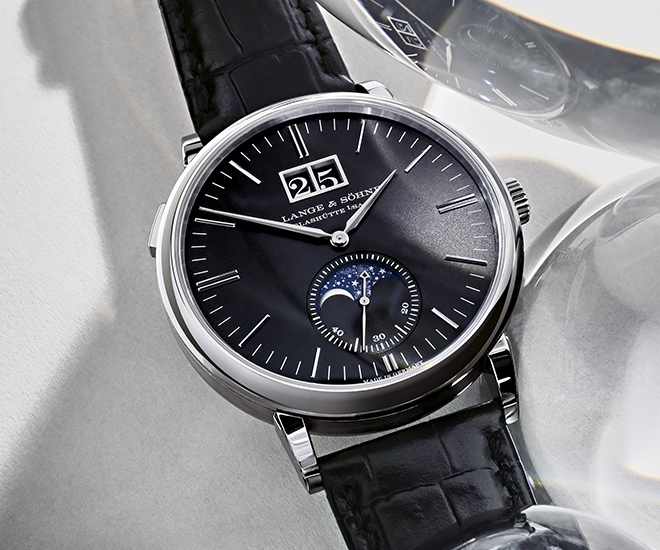 Indeed, those design codes have shaped everything since including the Saxonia Outsize Date,  Moonphase, and 1815 chronograph. “Everything is designed with architectural precision and located in exactly the right place,” says de Haas. Indeed, beginning from the arguably the world’s most impressive chronograph, the two-registers of the Datograph have often been praised for the design and placement of its counters but few have ever deduced the simple reason for its undeniable allure.

And to give the utmost force and solidity to your work, some part of the picture should be as light, and some as dark as possible: These two extremes are then to be harmonized and reconciled to each other. – Sir Joshua Reynolds, English Painter, 1783 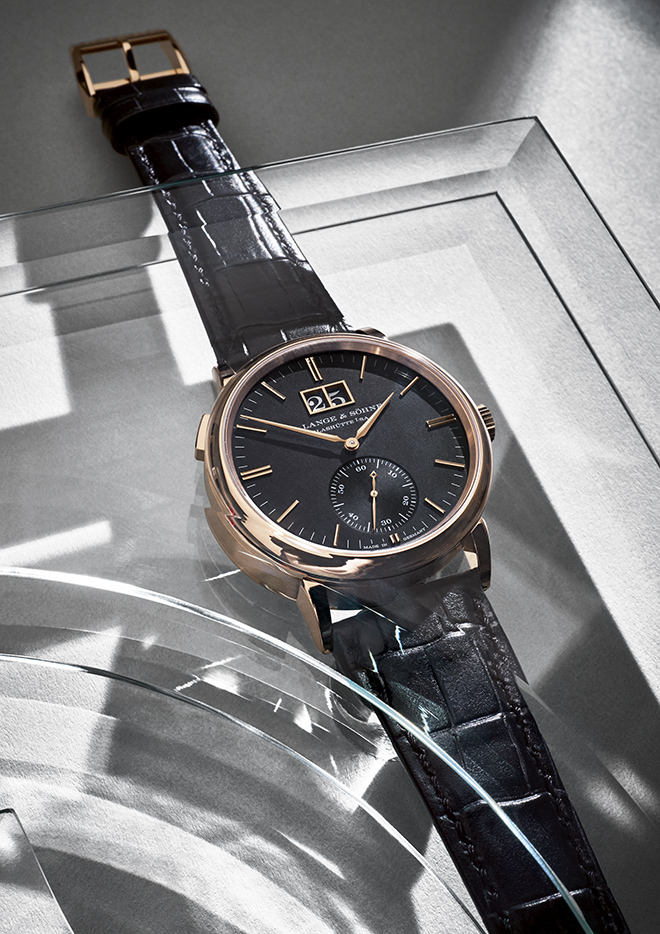 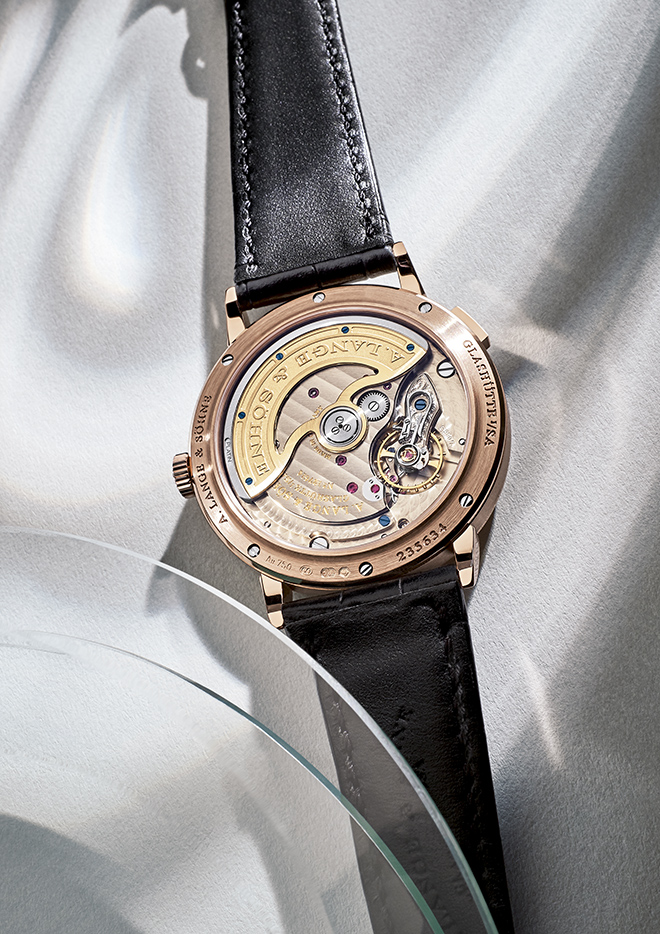 It has been a concept understood since 1783 when Sir Joshua Reynolds understood, that “Two distinct, equal lights, should never appear in the same picture: One should be principal, and the rest subordinate, both in dimension and degree: Unequal parts and gradations lead the attention easily from part to part, while parts of equal appearance hold it awkwardly suspended, as if unable to determine which of those parts is to be considered as the subordinate.” From that point, John Thomas Smith, Engraver, Antiquarian and Keeper of British Prints crystalised the theory as “The rule of thirds”, a guideline which applies to the process of composing visual images such as designs, films, paintings, and photographs. What you saw then in the Datograph and today in the 1815 chronograph is the distillation of that ideal. “Many thought that the position of the registers was originally to provide balance to the outsized date on the Datograph but really, its to establish visual asymmetry akin a photograph or epic painting,” explains de Haas. 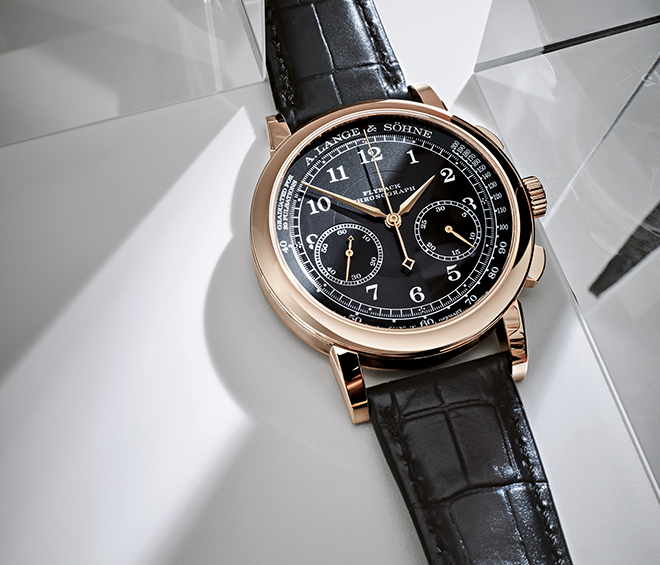 Furthermore, the dial of the 1815 Chronograph was painstakingly analysed as well and improved to enhance the harmonious overall impression: Due to the integration of a peripheral pulsometer scale, the radius of the minute scale had to be reduced. Accordingly, the hands were slightly shortened and narrowed. The designers replaced the brand arc above the axis of the hands with the A. Lange & Söhne signature at the outer edge of the dial.

For the astute, the Outsize Date on the namesake Saxonia is slightly smaller than that of the Saxomia Moon Phase. “We implemented only minor adjustments in the pro- portions,” explains Anthony de Haas, “but of course, such details have a great impact on the overall aesthetic appeal of a watch.” Given that the case diameter was reduced from 40 to 38.5 millimetres, de Hass decided to proportionally reduce the size of the outsize date – by exactly four per cent – in order to preserve the visual equilibrium.