In the run-up to the F1 night race taking place in Singapore this weekend, IWC has unveiled two new watches jointly designed with the drivers from the Mercedes AMG Petronas (MAP) racing team – the Ingenieur Chronograph Edition ‘Lewis Hamilton’, and the Ingenieur Chronograph Edition ‘Nico Rosberg’. IWC is the official engineering partner for MAP, […] 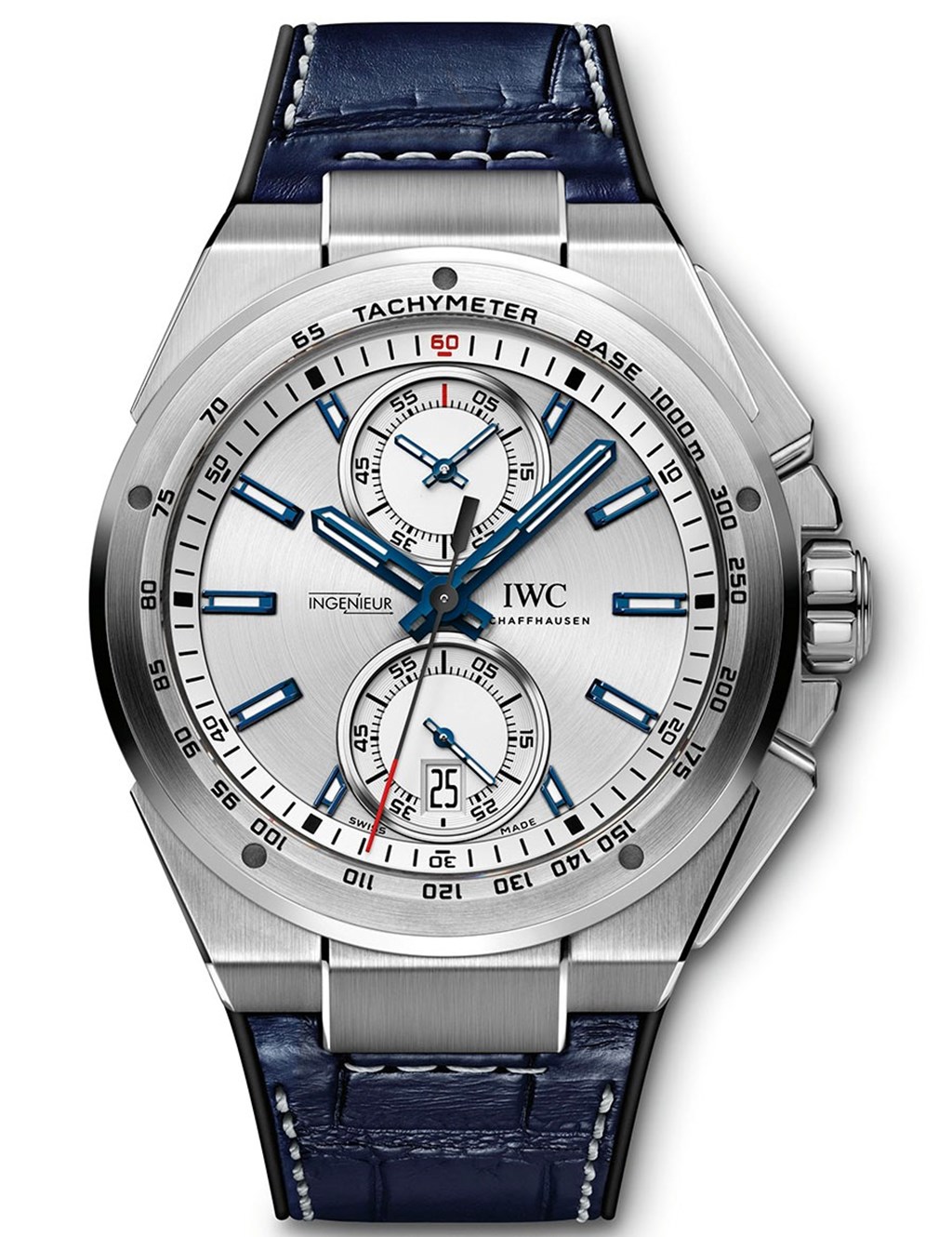 In the run-up to the F1 night race taking place in Singapore this weekend, IWC has unveiled two new watches jointly designed with the drivers from the Mercedes AMG Petronas (MAP) racing team – the Ingenieur Chronograph Edition ‘Lewis Hamilton’, and the Ingenieur Chronograph Edition ‘Nico Rosberg’. IWC is the official engineering partner for MAP, and the namesake watches come as no surprise given both drivers’ penchant for horology. At a glance, one can see the new watches’ similarities to the Chronograph Racer (above) from IWC’s Ingenieur collection. The three timepieces all sport bi-compax layouts and 45mm cases, and have combined chronograph minute and hour totalizers on their 12 o’clock sub-dials. The latter are in turn balanced by small seconds sub-dials at six o’clock, complete with integrated date windows. The new watches are also similarly powered by IWC’s Calibre 89361 movement. This self-winding chronograph movement has flyback function and comes with a 68-hour power reserve.

The above parallels are no coincidence. Christian Knoop, associate director of IWC’s Creative Centre, has remarked that the design process faced time constraints given the drivers’ schedules and the need to allocate sufficient time for actual production and testing. It was impossible to design a new watch from ground up anyway – Knoop expressed his priority to maintain IWC’s heritage by adhering to timeless (and not merely fashionable) designs, which were to come from one of the manufacture’s six current collections. The choice of Ingenieur was obvious, given its sporty lineage and association with motorsports. Based on design ‘toolkits’ provided for by IWC, each driver then came up with his own watch.

Despite these ‘constraints’, the visual contrast between the drivers’ watches are apparent. When asked about their respective designs, both drivers were extremely candid – there was no marketese about how the watches were reflections of their personalities or the like. Instead, each driver had different goals when designing their watches, which are reflected in the final products. Lewis Hamilton, being a technophile, wanted a watch that featured a lot of technology. To that end, his watch (above) features a dial, crown and crown protection, and chronograph pushers all made of carbon, a material that sees widespread usage in F1 cars in various forms. His choice of a titanium bracelet was also deliberate, and a first for IWC – Hamilton wanted a metal bracelet that was rugged and skin friendly. On the other hand, Nico Rosberg wanted a watch that showcased elements of complex technology, passion, and emotion. Unlike Hamilton’s monochromic design, Rosberg’s watch (above) has bright splashes of yellow for its chronograph functions reminiscent of his previous helmet, with a silver plated dial that further lightens up the watch’s colour scheme. A dark fabric strap completes the watch for an airy and sporty look.

Differences in design philosophy aside, the watches share similarities that differentiate them from the ‘stock’ Ingenieur Chronograph Racer. Firstly, the case back of each watch is embedded with a carbon fibre medallion. This medallion comes from the undertray of the respective driver’s race car that was used earlier this season, and sealed with a piece of sapphire glass adorned with his personal logo. As a result, the watches are 1mm thicker at 15.5mm compared to the Chronograph Racer. Interestingly, both drivers had also separately chosen to use Grade 2 titanium for their respective watches instead of the stronger Grade 5 commonly used in watchmaking – unlike the latter, Grade 2 titanium is darker and looks less like steel, which the Chronograph Racer is made in. Finally, both watches are limited editions, and will come in 250 pieces each.

On the occasion of the watches’ unveiling, IWC and MAP also announced that they had renewed their partnership for a further three years – IWC will thus be the official engineering partner for MAP until the end of the 208 Formula 1 season.