Made for at the request of the Maison’s faithful friend Ettore Bugatti, the chronograph is back where it belongs. 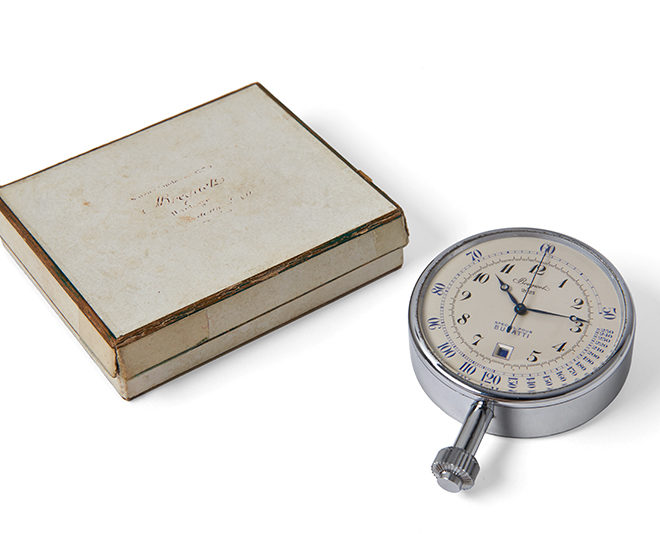 Breguet has welcomed another antique timepiece to its own collection. Acquired at the Rétromobile Exhibition auction held on February 6, the Breguet No. 2023 has now found a home at The Breguet Museum. The timepiece happens to be one of the nine car timepieces that the watchmaker had originally sold for Bugatti in 1932.

With a chrome-plated metal case, the 8-day power-reserve chronograph was designed specially for Bugatti, which explains why Breguet chose to use tachymeter scale for its complication. Measuring in at 67mm, the words “Special pour Bugatti” sits proudly on the dial, above the six o’clock window. The timepiece also features the famous blue steel Breguet hands that were designed nearly three centuries ago while an elapsed minutes counter sits in place of the digit six. The timepiece was meant to sit in the middle of the steering wheel and has an unusual crown that can be found, again at six o’clock. Powered by a mechanical movement (quartz didn’t happen till later in the 20th), the creation is one that adds showcases the diverse range of creations that the Manufacture produced in the inter war years. Sold in its original box, the timepiece helps to enrich the Manufacture’s history and cultural heritage, a desire that Marc A Hayek, President and CEO of Breguet aims to fulfil. No price was announced by the Swatch Group-owned firm for this acquisition.