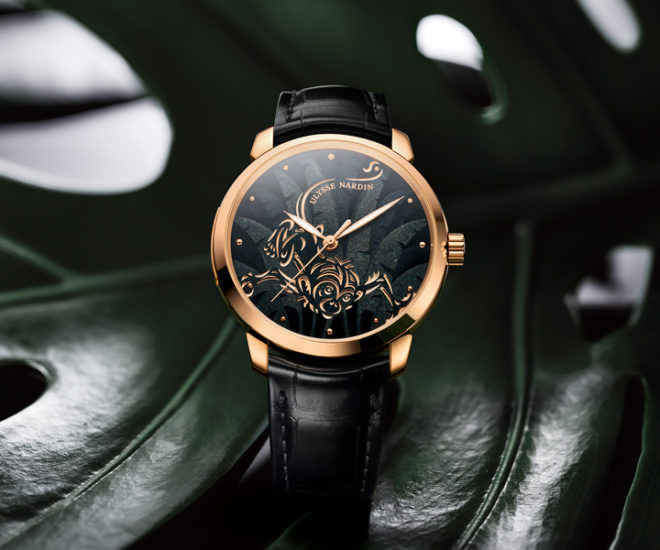 The year of the monkey began several months ago but that doesn’t mean its too late for you to get some arm candy featuring exceptional artwork. We bring you six timepieces that combine the art with the zodiac in a sophisticated way. Reprising the Japanese art of lacquer painting, the L.U.C XP Urushi Year of the Monkey depicts a scene considered particularly auspicious: A monkey gathering eight peaches. This symbolises longevity and good fortune since peaches stand for good health and eight is a lucky number. Chopard worked with the Yamada Heiando lacquerware firm, which happens to be the official purveyor to the Japanese imperial family. The incredibly lifelike Petite Heure Minute Relief Monkey resembles a mini-diorama, the kind you might find in a natural history museum. No less than four métiers d’art techniques were employed in its making: mother-of-pearl marquetry (on the peach tree), hand-engraving and sculpture in relief (on the macaque and branch), and lacquering (on the dial). Two versions exist, one in white gold and the other in red gold, each limited to 28 pieces. Panerai’s tradition of making Luminor 1950 Sealand models engraved with animals of the Chinese zodiac continues this year. It began with the Year of the Ox in 2009. This year, PAM850 bears a picture of a monkey surrounded by peach blossoms. While the subject engraved on the case cover is indisputably Chinese in style, the technique used is Italian, involving the hammering of gold threads into hand-chiselled grooves. Going for a more comic strip-like style as opposed to attempting to create a lifelike image, Ulysse Nardin presents a monkey motif that is alert, lithe, and impish yet artistic. This dial had been created for Ulysse Nardin by sister firm and dial specialist, Donze Cadrans, which used the champlevé technique. Chiselling grooves on the dial and filling them with vitreous enamel, the background lends a nice contrast to the gold markings. Crafting artistic watches is Vacheron Constantin’s specialty and its Chinese zodiac collection has always aimed to replicate the nuances in poise and expression of the animals. This year’s piece combines relief engraving with the traditional art of paper cutting. In addition, Grand Feu enamel was used to create the backdrop of a blue or bronze-toned dial. Using the Calibre 2460 G4 allows for a view that is not obscured by hour and minute hands. After the dragon, snake, horse, and goat, Piaget gives the monkey a go in this 12-year series. World-renowned master enameller, Anita Porchet, graciously loaned her skills to the manufacture, presenting a dial that resembles a traditional Chinese watercolour painting. Here, Porchet used the cloisonné technique with the Grand Feu method and her initials have been painted by hand at five o’clock. Only 38 pieces have been produced.