Once the world’s top exporter of black caviar, Russia is building fish farms to harvest the gourmet delicacy as it aims to bring its sturgeon stocks back from the brink. In Gamzyuki, a tiny village in the Kaluga region, around 200 kilometres (125 miles) south of Moscow, a fish farm has the ambitious goal of […] 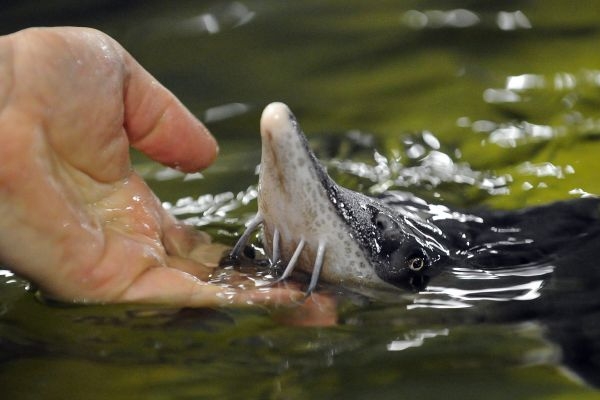 Once the world’s top exporter of black caviar, Russia is building fish farms to harvest the gourmet delicacy as it aims to bring its sturgeon stocks back from the brink.

In Gamzyuki, a tiny village in the Kaluga region, around 200 kilometres (125 miles) south of Moscow, a fish farm has the ambitious goal of producing 16 tons of the sturgeon eggs per year by 2014.

It is one of dozens of sturgeon farms that have opened in Russia recently, aiming to rebuild the nation’s reputation as the world’s premium exporter of caviar.

In a brightly-lit hangar, thousands of the distinctive fish with pointed snouts and whisker-like barbels swirl around in dozens of vast pools, tended by white-coated workers.

Several times a month, the workers net the fish and extract their eggs through a careful incision in a technique that does not kill the long-lived fish — unlike those caught in the wild, which are simply slashed open.

Such unsustainable fishing grew rampantly after the fall of the Soviet Union and led to stocks falling so low that Russia nine years ago introduced a moratorium on commercial fishing of sturgeon in the Caspian Sea.

The other countries bordering the Caspian Sea, the source of 90 percent of the world’s non-farmed caviar, also agreed to respect the moratorium.

At the Gamzyuki fish farm, workers in gloves and plastic caps make a shallow incision in a fish’s belly and squeeze the granular black eggs into a steel basin.

“It makes economic sense, since we only have to farm a third as many fish as if we had to kill them,” said the farm’s director, Vladimir Kalashnikov, a former fisherman from the city of Astrakhan on the Caspian Sea.

So far, the fish farm has produced just five tons of caviar per year because its fish, aged up to seven, are still reaching full size.

“At the moment, we are only at the preliminary stage. We need to give the fish time to produce caviar,” Kalashnikov said.

Farming of caviar has bright prospects, while the moratorium will take decades to take effect and revive the wild sturgeon population, he cautioned.

“It is hard to believe that the (wild) sturgeon population will re-establish itself in the next 20 years,” he cautioned.

Russian officials agreed that the fish population is under threat.

The government has encouraged businessmen to open farms such as the one in Gamzyuki by laying down clear rules for the industry, Savelyev said.

“Three years ago, an investment boom in fish farming started when businessmen felt the government was putting in place reliable, clear rules for the market in the long-term.”

The government has also cracked down on sturgeon poaching, launching a “serious fight” against the black market, which a few years ago was estimated to be worth around $1 billion, he said.

In February, the agency issued the first permit for up to 150 kilograms (330 pounds) of farmed caviar to be exported to the European Union and plans to issue additional permits for a total of 2.5 tons this year, Savelyev said.

“We consider that we can become the leaders in this market,” he said, estimating that the sales of caviar in the European Union amount to around 350 tons per year.

Russia is not the first country to take a serious interest in sturgeon farming, with countries including France, Israel and China already involved in the industry.

But Savelyev believes Russia has an edge because of its historic cachet as the authentic home of caviar.

A customer choosing between tins of caviar from France, China or Canada or one from Russia will always pick the Russian one, he insisted. “It’s the brand that matters most of all.”