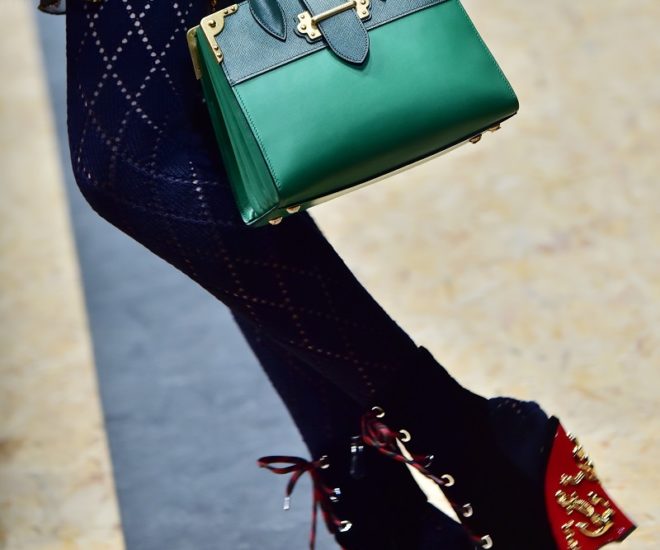 The unveiling of Prada’s Fall-Winter collection at Milan Fashion Week on Thursday was provocative, spectacular, and glamorous, but perhaps other more pressing economic considerations were underlying the artistry of the show.

Corsets overlaid on jackets, or belts as well, hinted at darker ‘gendered’ messaging calling to mind bondage or inner-wear as outer-wear (neither unusual in fashion), while sailor or nurse-style white caps were liberally thrown in giving a ‘post-war’ (that’s the 1940s post-WWII USA and Western Europe) feeling towards the whole.

Keys and leather-bound books hung down from necks and waists as accessories. Prevalent were patterned woolly tights. Decadent styling came through in elaborate gold and glimmering embroidery on some of the dresses. As with the menswear show earlier this year, the prints are part of a collaboration with Christophe Chemin. Leather coats came with fur-trimmings. Pencil skirts were designed to emphasize the slender waists of more austere times (again, post-war reconstruction).

But an equally significant motif among those models that strutted down the Milan catwalk was that almost every model had one of the company’s famous handbags on them. Savvy fashionistas will recall that this item was key in powering Prada’s growth over the years.

Two years consecutive of stagnating sales coupled with a slowdown in China, hit the company particularly hard. This show may be a sign of their first dip into a “see now, buy now” strategy. In fact, two of the bags shown were made to be available to buy from Friday rather than being held back until four months later, when the collection goes on sale.

This trend has already been embraced by Burberry and Tom Ford, among others. If it takes off, it is seen as having the potential to completely transform the way upmarket designer clothes are produced and marketed. It looks like Prada’s fashionable provocations continue but the firm is very keen on satisfying its customers.