The BOSS Black Fashion Show Beijing Fall/Winter 2012 will be streamed LIVE in 3D on hugoboss.com on May 18th 2012. 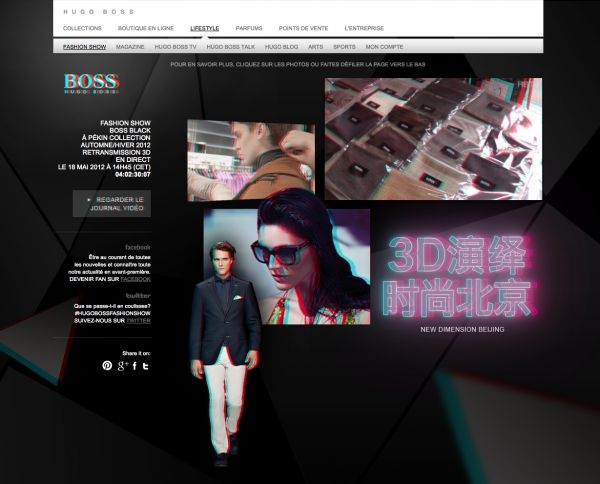 Fashionistas are invited to take their seats at the first fashion show to stream live in 3D when Hugo Boss presents its Boss Black Fall/Winter 2012 catwalk show May 18 from Beijing.

Hugo Boss will now show what has been dubbed the first live stream 3D runway show at www.hugoboss.com, with model and designer interviews and backstage impressions also to be part of the live stream, which begins at 8.45 PM CST.

While many dedicated fans have already received their own free Hugo Boss 3D glasses, it’s not too late for fashionistas hoping to watch as there are a host of YouTube tutorials on making your own pair.

Meanwhile, check out the latest episode of the “Way to Beijing” video diary, which offers an insight into the workings of Boss Black menswear designer Kevin Lobo.

The label has also launched a “Make your pic 3D app” via its Facebook page, allowing users to create their own 3D profile picture.