French luxury brands launch a campaign with several European countries to fight back against the increasingly lucrative flood of counterfeit goods. 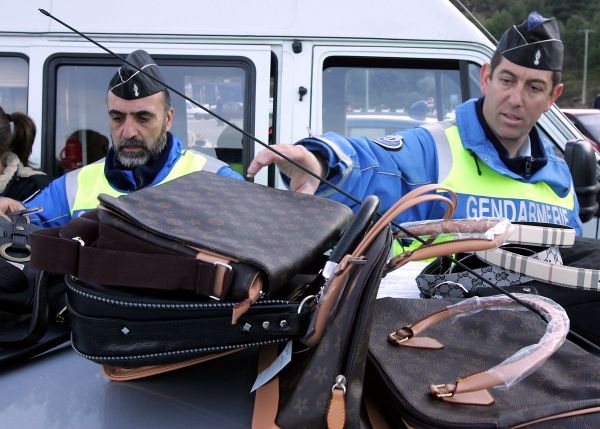 French luxury brands from Chanel to Vuitton on Wednesday launch a campaign with several European countries to fight back against the increasingly lucrative and damaging flood of counterfeit goods.

The global market for luxury fakes has exploded, fed by Asia where 85 percent of articles seized in Europe are produced and the increasing popularity of on-line shops that give the buyer a sense of anonymity and impunity.

To fight the scourge, the Comite Colbert grouping 75 French luxury goods makers including Dior, Cartier and Remy Martin, is launching a poster campaign in French airports ahead of the summer to dissuade travellers from buying fakes.

“You can call your lawyer with this telephone,” reads one of the posters, above a picture of a counterfeit Chanel mobile.

“In France you can be fined up to 300,000 euros and jailed for three years” if you own counterfeit goods, the posters say.

The Comite Colbert has staged campaigns every two years since 1995, but this time Italy, the Czech Republic, Hungary, Slovakia, Romania and Croatia are getting involved, with their customs officers able to use the posters for free.

Counterfeit seizures doubled in Europe between 2009 and 2010, reaching 103 million items worth 1.1 billion euros ($1.37 billion), with customs officers themselves often unable to tell the fake from the real.

As home to many of the world’s best known luxury brands, France is particularly exposed. Fake goods cost the economy 30,000 jobs and six billion euros in lost revenues every year, according to the Comite Colbert.

Clothes, sunglasses, perfume, cosmetics, leather goods, half the 8.9 million counterfeit articles seized in France in 2011 were luxury goods, with Louis Vuitton products the most copied.

Globally the underground fake goods economy is booming thanks to Internet shopping, as testified to by the increasing number of items seized in postal sorting offices.

Which is why the Comite Colbert now wants to get the cooperation of banking groups and payment handlers, such as Mastercard, Visa, American Express and PayPal, to track the illegal trade online.