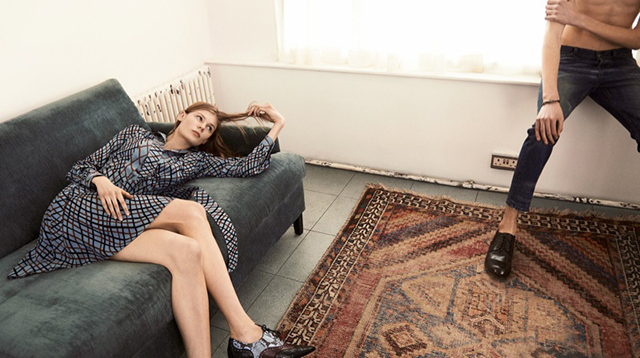 The former accessories designer took over from Frida Giannini as creative director of the brand in January.

Though already creative director of Gucci during February’s runway shows, Alessandro Michele had yet to truly present his own vision for the Italian brand. With this Pre-Fall 2015 ad campaign he’s accomplished just that. The first images indicate a significant shift in the brand’s direction, with an increase in simplicity and restratin, both in the designs and the models themselves.

Alessandro Michele particularly made a statement with the choice of photographer, an important and decisive change for the brand.

Lately, the previous campaigns, under the direction of Frida Giannini, had been produced by Mert Alas & Marcus Piggott, responsible for several glamorous and sexy fashion campaigns (Versace with Lady Gaga, or the sensual Dolce & Gabbana beauty campaign with Vittoria Ceretti). This time, the new creative director called on British fashion photographer Glen Luchford, a longtime Prada collaborator who has also produced campaigns for Yves Saint Laurent, Elie Saab and Chloé, all the while dabbling in other art forms, such as cinema and painting. The result is a more intimate and sober atmosphere in which we find Swedish top model Julia Hafstrom gazing at the muscled bare chest of Jack Chambers, whose face we don’t actually see. It’s all in the power of suggestion, an approach which indicates a new focus for the brand.