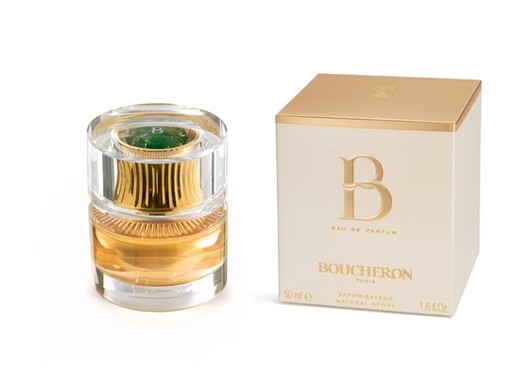 Inspired by the Exquises Confidences jewelry collection, Bâ€™s flacon is executed with the same perfection as Boucheronâ€™s jewelry, incorporating the trademarked design known as the plisse (pleats) cut.

Only a cabochon emerald-green stone and the engraved letter â€œBâ€ decorate the bottleâ€™s cap, in keeping with the brandâ€™s discreet design sensibility.

The womenâ€™s fragrance features woody notes of cedar, sandalwood and patchouli together with floral notes of orange blossom and rose.

The fragrance was composed very much like a piece of jewelry. Rather than the traditional top, middle, and base notes, B de Boucheron was created as an inverted pyramid.

The base notes came first, like the structure of the necklace; the middle notes were used like larger stones, followed by the top notes to add sparkle and radiance like small diamonds,â€ explained Jean-Christophe Bedos, Boucheronâ€™s president.

â€œB de Boucheron is compelling enough to be more than just another fragrance. It is in fact for the lady who wears it like a real piece of jewelry signed by the â€˜jeweler of sensual desire,â€™ Boucheron.â€

The fragrance is available as an eau de parfum, shower gel and a body cream from Boucheron stores worldwide. Source : VanityFair