Sylvester Stallone’s La Quinta, California mansion is on the market for $3.35 million

The multi-hyphenate actor, director and screenwriter, Mr. Rambo himself is putting up his gorgeous custom California mansion for $3.35 million dollars 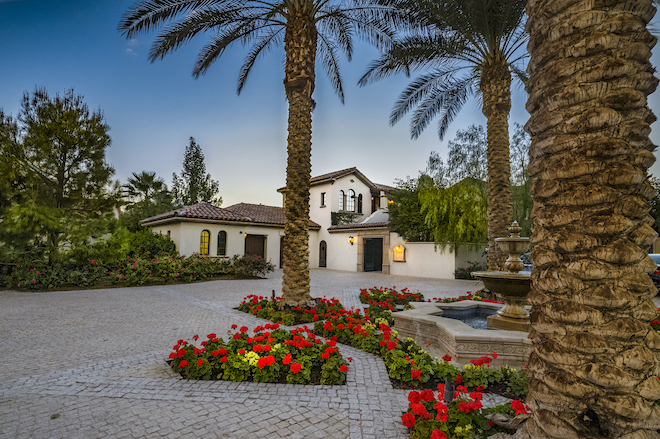 Sylvester Stallone’s La Quinta, California mansion is on the market for $3.35 million. News of Stallone’s real estate listing comes by way of TopTenRealEstateDeals.com. A famed Los Angeles suburb, La Quinta is known for its sprawling gold courses and of course celebrity cliental, many of whom, have come to play, build a nest or get some writing done.  Notably, Frank Capra wrote the screenplay for Lost Horizons in 1937 while lounging poolside at the La Quinta Resort & Club. And for a while, Stallone called La Quinta home. 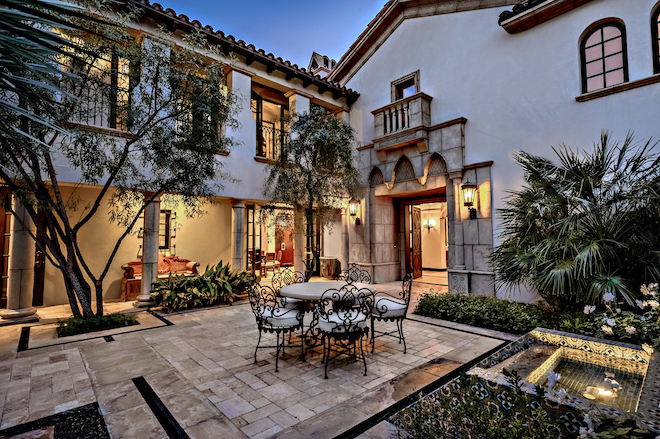 Highlighting his Italian heritage, Sylvester Stallone’s La Quinta, California mansion is on the market for $3.35 million.

Double-wooden front doors; walled patio entry; inside rooms that open to the outdoors; vaulted foyer; an arched entrance into a two-story, beamed-ceiling living room with fireplace; meals that can be enjoyed in the more formal dining room that opens to the rear terrace or in a number of other locations from the large eat-in island kitchen to the outdoor dining spaces and courtyard; Stallone’s stunning La Quinta mansion definitely pay homage to his culture and la famiglia –  the most important aspect of an Italian’s life. 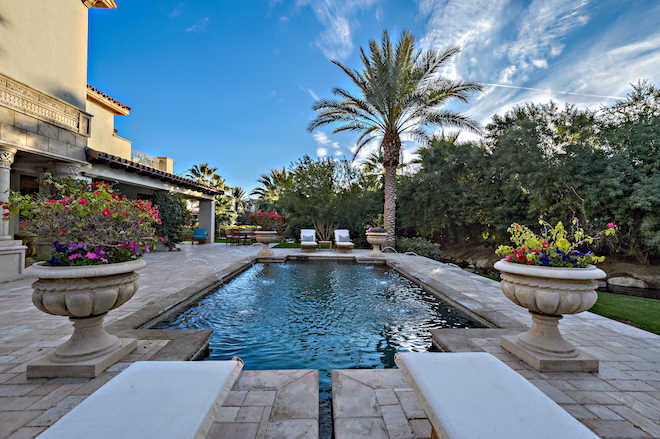 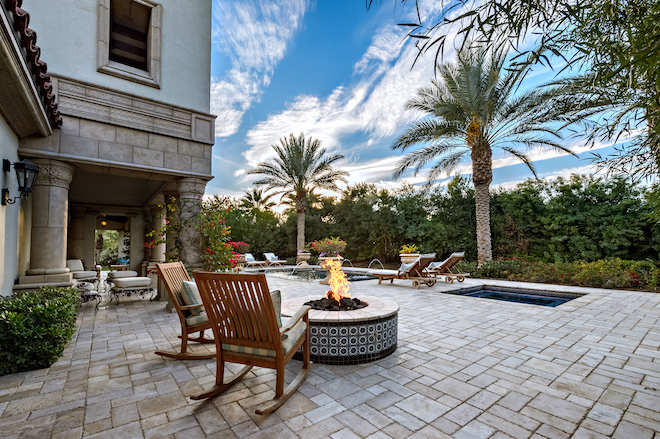 There is a deep respect for family and community in the Italian way of life and Stallone’s California mansion is emblematic of the multiple spaces for conversations and sharing a convivial repast. Such is the importance and value placed on kinship that Stallone, at his lowest point, famously sold his dog, his companion through hell and high water, in order to avoid starvation. After he struck gold with Rocky, Stallone retrieved his dog for a princely sum of $15,000 in 1977, slightly over $65,000 adjusted for inflation.

Signature features of Stallone’s La Quinta home include coved ceilings and arched entryways between rooms with floors of hardwood and tile. A classic home for entertaining, there is a wine room and outdoor kitchen on private terraces. Upstairs, the master suite has a fireplace, a television that rises at the foot of the bed, large master bath, dressing room and another private terrace with long-distance views to the mountains. Outside past the firepit and just steps off the terrace across the grass is a lovely pool and spa, lush plantings, water features and a rock-strewn flowing stream that runs across the property. 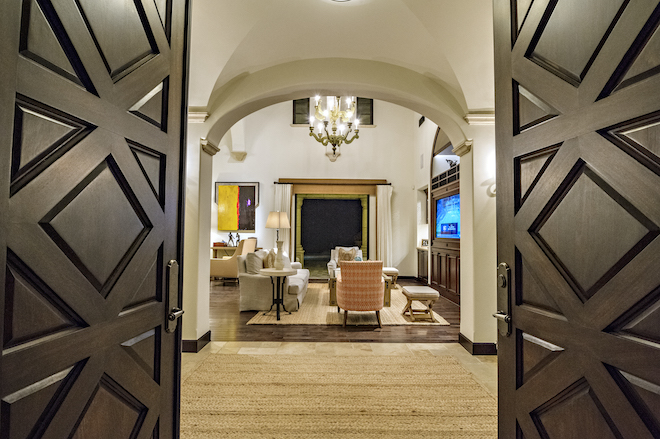 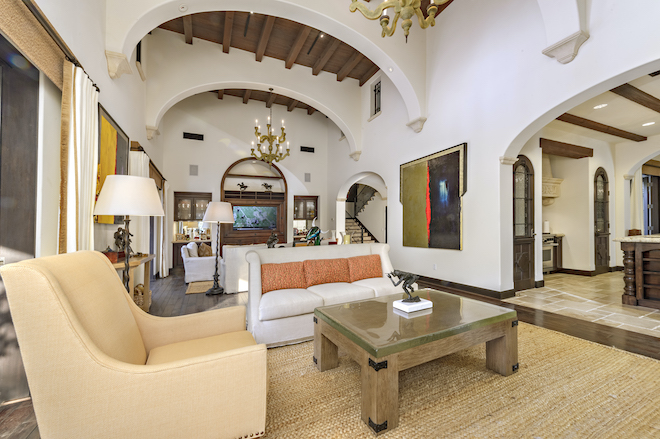 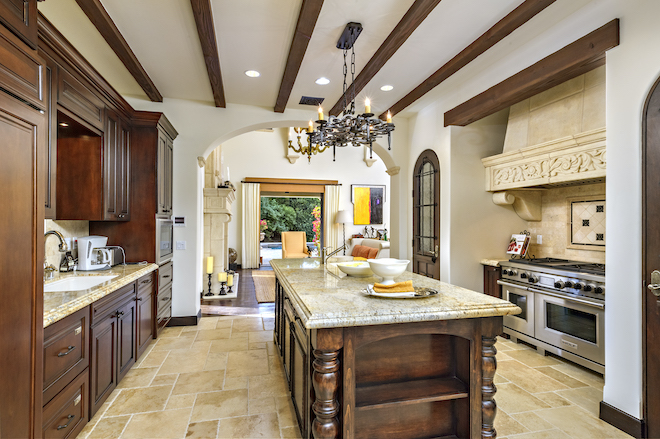 The multi-hyphenate actor, director and screenwriter, Stallone is also a prolific painter whose work has been displayed in art museums and galleries in the United States, France, Russia and Switzerland. His most recent movie, Rambo: Last Blood, in which he takes on a Mexican drug cartel, opened last fall with box office sales over $91 million so far.

Sylvester Stallone is selling the custom home that he built in 2008 in La Quinta’s golfing community of Madison Club.  The median list price of La Quinta real estate is $699,000. While the typical home in La Quinta sells for about 4% below list price in around 85 days, Stallone’s house is anything but typical. Bearing remarkable provenance, built and influenced by Rambo himself, “hot homes” such as Stallone’s will likely sell for its asking and see a 40 day turn-around. 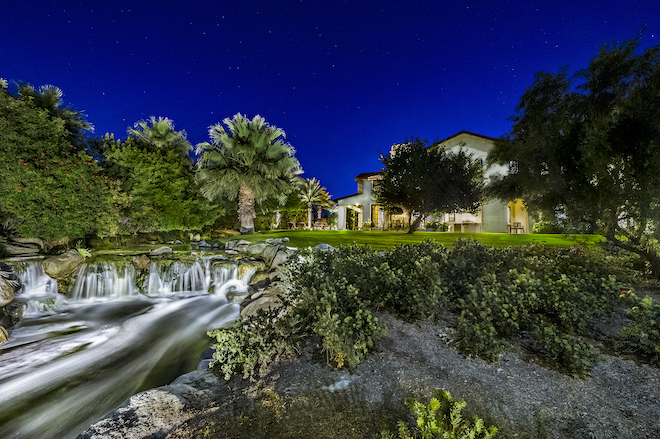 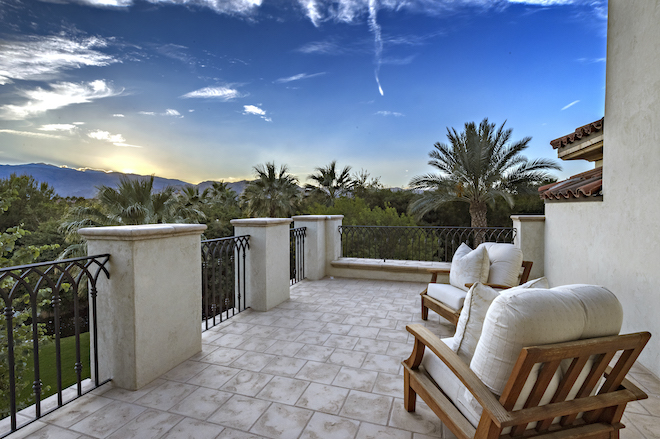 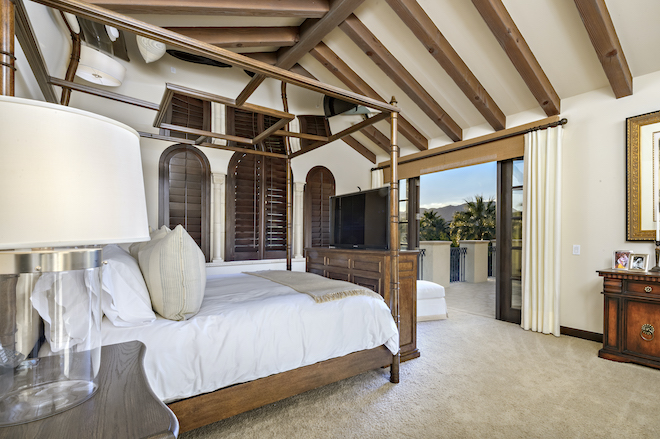 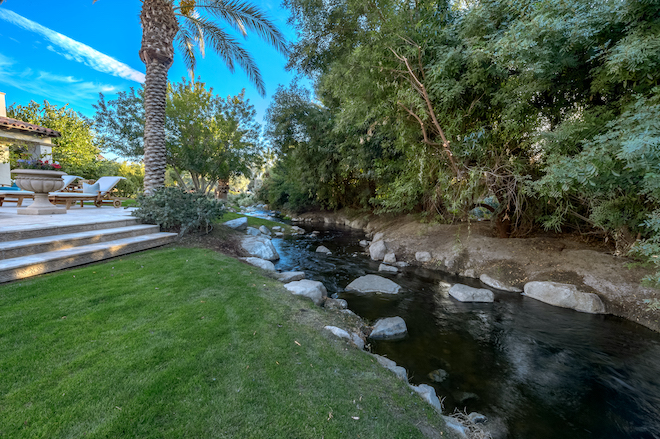 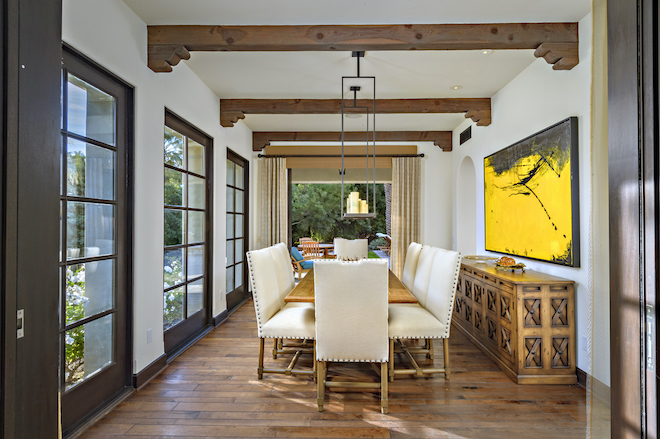 Priced at $3.35 million, images of Stallone’s California home is provided by his listing agent, Josh Reef of Douglas Elliman, Beverly Hills. La Quinta has been the host city for a number of prestigious golf tournaments over the years including annually The American Express formerly known as the Bob Hope Desert Classic. La Quinta is a celebrity hot spot and has attracted residents such as Kanye and Kim Kardashian-West, Tom Brady and Kylie Jenner.