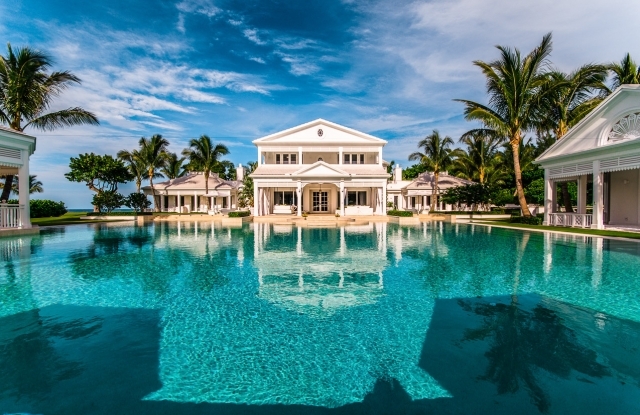 Celine Dion and her husband Rene Angelil have just listed their Jupiter Island, Florida compound for a whopping $72 million via a Canadian realtor. The location can’t be beat: Jupiter Island is a wealthy enclave of some 800 people north of the Miami area, and it has one of the highest per-capita incomes of any town in the U.S. Dion’s island neighbours include golf legend Tiger Woods and country singer Alan Jackson. Montreal Realtor Joseph Montanaro, who has the listing, said the house hasn’t been used as much as Dion hoped. He said the asking price is “just about” what it cost to build up the property. The listing describes the house as a “luxurious Bahamian-inspired estate” with 415 of oceanfront, one main house and five pavilions, including a four-bedroom guest house. The master suite has a walk-in closet with an automated rack for clothing and an automated carousel for shoes. It has a wraparound terrace and two decks, one with an fireplace and another with a hot tub. The property also includes an eight-bedroom guesthouse, a tennis house with a simulated golf range, a pool house and a beach house with a sleeping loft and massage room. There are three pools, one at the rear of the property by the ocean, and two connecting pools at the front that have their own water park, with two slides, a bridge over a lazy river and water gun stations. The house is being sold “turnkey,” meaning the new owner gets to keep almost all the contents, including furniture, with the exception of Celine’s personal effects, the listing states.