The villa at Steele Point on the island of Tortola is perched on a rocky headland 90 feet above sea level. 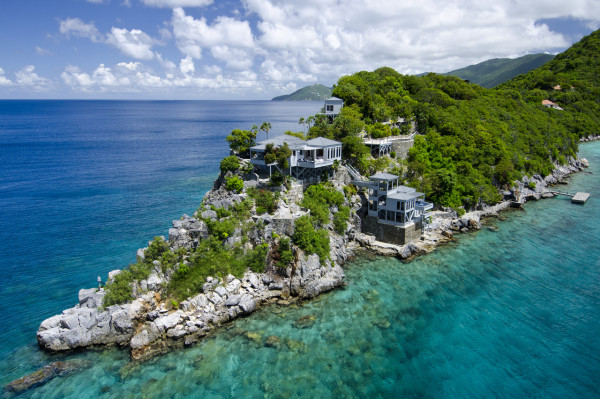 Steele Point is a familiar sight for sailors in the British Virgin Islands. The villa, perched on a rocky headland, is the first house on Tortola visible to vessels approaching from the West. The 2-acre property, on the market with Coldwell Banker’s Chris Smith for $15 million, was designed in the 1970s by Michael Helm of Tortola-based Michael Helm Architects.

The villa is actually three structures linked by pathways. At the top is a bedroom with an outdoor shower. Another building further down houses the living and dining rooms, 2 bedrooms and 2½ baths, and below that is a structure with 2 bedrooms and 2 baths—including one with its own live palm tree.

Building the house was challenging, Mr. Helm said, since ‘that peninsula is not one piece of rock—we had to secure the rocks together.’ He solved the problem by anchoring the concrete foundation of the house to the rock with 20-foot long steel rods. Building materials had to be transported to the site by boat and hauled up the cliff, he said.