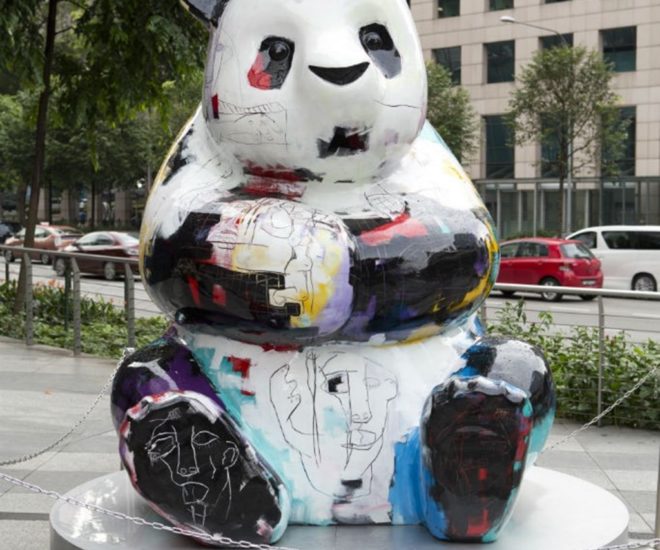 If you recognize Julien Marinetti’s famous panda fixtures at the front of ION Orchard, Interlace Condominium and at Westgate at Jurong East, you might want to know who brought those to the streets of Singapore.

Galeries Bartoux is a family group of galleries managed by Isabelle, Jean-Guy, Charles, Alexandre and Robert Bartoux. The Galeries Bartoux specializes in Contemporary Art and favours the new artistic currents. The aim of the gallery owners is to see new works finding their place in public or private, French or foreign institutions, museums and companies, as well as encouraging the growth of the Asian contemporary art scene.  Most of the works in the gallery are by artists that have made significant contributions to the 20th century movements of surrealism, cubism and pop art. Just like the Marinetti’s famous pandas, Galeries Bartoux not only keeps their works IN the gallery, but brought out to the public to raise awareness and appreciation for contemporary and international art. Together with the rapid growth of the art scene in Singapore, Mr. Robert Bartoux, Co-Founder of Galeries Bartoux explains why Singapore was the perfect choice, “We had always wanted to open a gallery in Asia and found that Singapore was the perfect choice with its easy access to the rest of the world. When we had decided to open our first gallery here in Singapore, it took us more than two years to find the location in ION Orchard. After its first year, the response has been simply overwhelming. I am particularly fond of the vibrancy and spirit here where Asian artworks are full of thinking and intelligence.”

This year, art gallery Galeries Bartoux Singapore celebrates its first anniversary after opening its very first Gallery in Asia right here in Singapore in ION Orchard. With the co-founders of Galeries Bartoux, Robert and Isabelle Bartoux, joining to share their thoughts on the gallery’s exciting plans for the Singaporean contemporary art scene in 2014, the cocktail party on the 6th of December 10, 2013 was filled with distinguished individuals and high-profile guests to celebrate the joyous occasion. The guests were able to interact and mingle with like-minded individuals as they viewed the masterpieces up close.