Going abroad but worried about your feline companion? Fret not because an upmarket hotel in the city-state has opened up a cats-only wing. 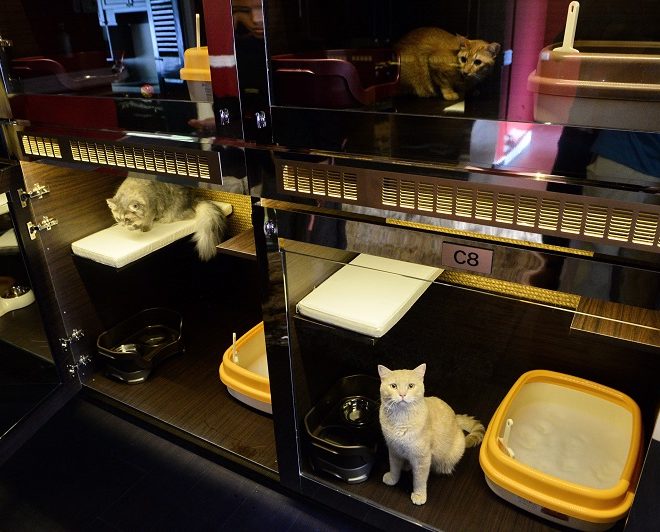 Rejoice all ye well-heeled cat lovers. A 14-room extension of the Wagington, Singapore’s premier five-star dog hotel at Loewen Road, has become available for cats as well. At the Purrfection Suites, felines can now receive upscale treatment the same way their doggie pals do.

While the debate is still open whether animals can really enjoy luxury in the same sense humans do, pet-lovers everywhere remain deeply concerned for the well-being of their animal friends. We don’t need Pixar movie style plots to learn how to empathize for other living things. This is equally applicable to the affluent, given the famous examples throughout history, some even becoming cultural icons. The image of dogs, for example, has become intimately entwined with British monarchs thanks to Queen Elizabeth’s penchant for corgis. More eccentric aristocrats have owned stranger pets, like French poet Gérard de Nerval who had a lobster (he walked it around in public tied to a blue silk ribbon).

So whilst some might think that it may be particularly eye-rollingly excessive to treat felines to Roberto Cavalli wallpaper, designer beds, purified air pumped into every room, Swarovski crystal-studded dining ware, and classical music played on a Sensurround system, we forget that some people love their furry friends in an almost maternal fashion.

Lawyer Jolene Lim, 26, who checked her seven-month old Persian cat into a cabin suite for five nights when she went on holiday, voices her opinion on the matter.

“For many people, their pets are like children. I definitely want to give her the best and whatever makes her comfortable,” she said.

Singapore seems to have a lot of pet lovers. One businessman offers weekend boat cruises for pets and their owners. Pets also have their own obituary section in The Straits Times. This may be the result of living in a city that, while being one of Asia’s richest, embraces such a dense and fast-paced way of life. You need a companion you can pull (literally in some cases) with you through thick and thin.

When the Wagington owner, Estelle Tayler, opened her dog hotel in 2014, she said that cat-owners have clamoured for a similar style of upmarket lodging for their pets.

“We decided to make a wing dedicated just for our feline friends, with its own private entrance,” Tayler said.

Apart from lodgings, the hotel offers grooming and spa services at an additional cost. It plans to introduce “in-room dining” featuring homecooked food as well.

At S$39 a night, pet owners who have the resources can finally find a place to set down their felines in the lap of luxury. Naysayers who shake their heads are probably the kind of people who don’t feel anything for Toy Story 3 because it’s about ‘inanimate objects’.