‘The Next Nobiskrug’ earned a lot of attention as the 62m, five-deck Project 794 was transferred from Kiel to Rendsburg for outfitting.

Germany’s Nobiskrug, renowned for pioneering megayachts like the 143m Sailing Yacht A, has moved its 62m Project 794 from its shipyard in the northern city of Kiel to the modern climate-controlled superyacht hall of its Rendsburg facility, where the motor yacht will be outfitted.

Following the keel-laying in June last year, the construction of all sections and assembly of the complete hull took place in Kiel before the performance-driven, high-volume yacht designed by Espen Øino International was moved.

As it made its journey to Rendsburg, the 203ft motor yacht was emblazoned with a huge banner on the port hull stating, ‘The NEXT NOBISKRUG’. The trip started from Kiel Fjord with a passage through the locks, into the Kiel Canal and continuing west inland along the River Eider until it reached Rendsburg in the early afternoon. 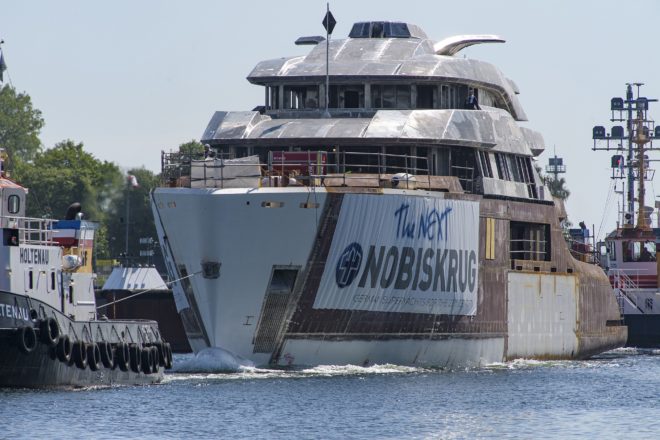 The 62m build marks Nobiskrug’s second successive superyacht with Imperial after the 77m Project Black Shark (Project 793), while the German builder and Monaco-based brokerage also worked together on the 73m Project 783 delivered in 2012.

Although founded a century earlier in 1905, Nobiskrug only launched its first superyacht, the 92.5m Tatoosh, in 2000. It has since built many megayachts from 60-80m as well as larger models including the 143m Sailing Yacht A, the triple-masted, sail-assisted motor yacht designed by Philippe Starck that was launched in 2015.

Nobiskrug spent most of its first century building barges, steamboats, tugs, tankers, cargo vessels and naval training ships, but is today recognised as one of the world’s leading megayacht builders, with 900 employees.

Johan Valentijn, Nobiskrug’s Managing Director, said: “Central to Nobiskrug’s success is the integral contribution made by all of our valued employees, with whom we share our momentous 115th anniversary, and all of our esteemed clients, partners and suppliers. Today we stand together, stronger than ever, and 115 years young.”