Yacht Style’s Issue 49 highlights a selection of the most exciting new models on display at this year’s Monaco Yacht Show.

The Monaco Yacht Show is the place to see world premieres of superyachts, as over a third of the 125 on display this year are appearing at an international boat show for the first time. 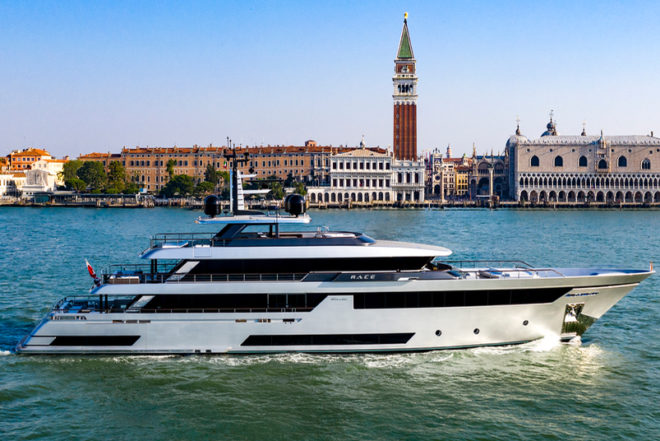 Riva’s 50m Race is the Italian yard’s biggest-ever build, by quite some margin

At 164ft in length, Riva’s 50m Race is the smallest yacht in our superyacht selection and the cover star of Yacht Style Issue 49. Designed in collaboration with Officina Italian design, the sub-500GT build is dwarfed by the likes of Lurssen’s 111m Tis, which at 4,500 GT, is about nine times the volume of Riva’s new flagship.

Yet, Race is arguably Riva’s greatest-ever achievement, more than three times heavier than the company’s previous flagship, the 110’ Dolcevita. And judging by the latter’s premiere at Cannes last year, Race’s elegant styling could prove a real head-turner in Port Hercules and a must-see for admirers of the historic builder that still builds 8m open boats.

In contrast, most of the other 50m-plus yachts exhibiting at Monaco are built by shipyards that exclusively build megayachts.

Italy’s Benetti is arguably the world leader in superyacht production and is now also a major player in what it describes as the ‘gigayacht’ sector, having launched three models over 100m at the end of last year and beginning of 2019. 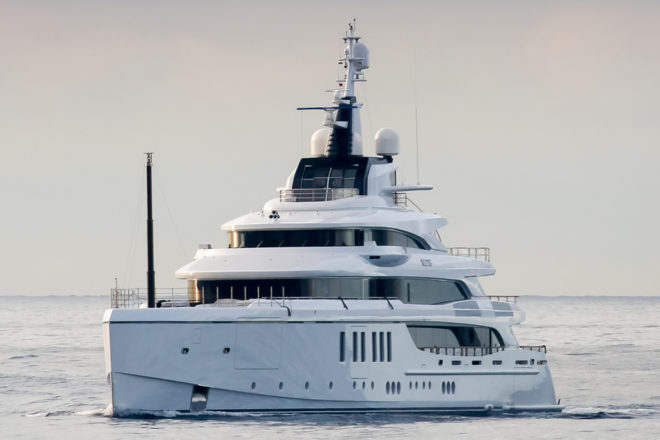 Monaco marks the world premiere of the 63m, five-deck Metis, which was custom built for a German owner, has a displacement of 1,100 tonnes and is the biggest Benetti on display. Italian Giorgio M. Cassetta, a long-time Benetti collaborator, designed the exterior, including the distinct vertical bow.

The interiors are a collaboration between German studio Birgit Otte Interior and London-based Bannenberg & Rowell, directed by Dickie Bannenberg and Simon Rowell.

Exciting features include the 160sqm-plus owner’s suite, which features a lounge and 180-degree views through full-height glazed surfaces across the private bow deck, while a custom-built gym on the fly deck and a touch-and-go helipad are among eye-catching features. There are seven cabins for up to 13 guests, plus accommodation for 13 crew. 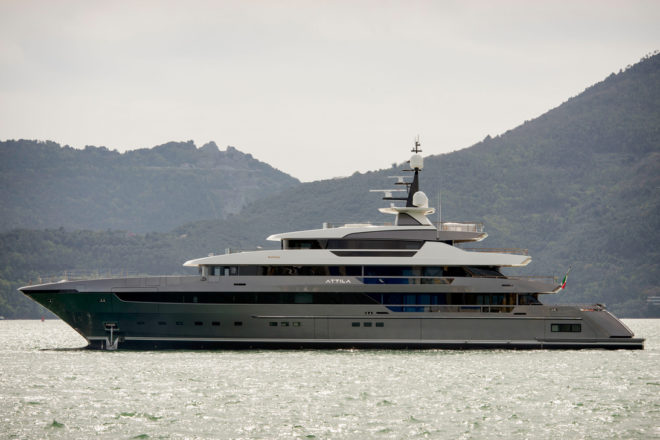 Built for an Argentine entrepreneur who had a Sanlorenzo 46Steel delivered in 2012, the new 1,600GRT Attila measures 64.25m in length and has a maximum beam of 13m, compared to Metis’s 10.5m. She has accommodation for 12 guests and 18 crew. Attila includes a 250sqm private owner’s deck, which has a large whirlpool bath in the bow, while the full-beam VIP suite and four guest rooms are on the main deck.

Another distinctive zone is the aft area of the main deck, where a pool and dining area is designed to integrate with the beach club below, which has a sauna, hammam, massage room and gym, right at the waterline. With the bow mirror and the side platforms open, the beach club covers 78sqm.

The yacht has a touch-and-go helipad at the bow, can house two 10m-plus tenders over 10m and there’s even a climate-controlled wine cellar with a capacity of up to 500 bottles.

Dutch shipyard Amels is staging the world premiere of the 67.1m Aurora Borealis, which is the first completed Amels 220, a Limited Editions model with a Tim Heywood exterior and Winch Design interior that has further orders in build. 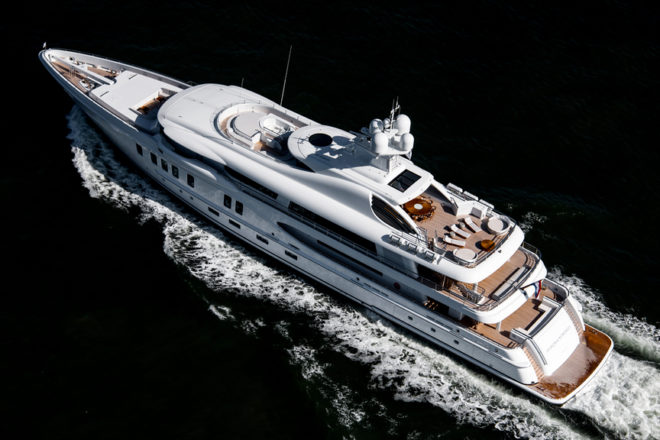 The 1,518GT yacht features accommodation for up to 14 guests in seven suites, including an owner’s suite on the main deck and two VIP suites on the bridge deck that feature full-height French balcony windows. The family-friendly sun deck has a seven-person jacuzzi and air-conditioned sky lounge.

Our short selection of superyacht world premieres wraps up with three models around the 79-80m mark. CRN’s custom-designed M/Y 135 was still known as such in August, when the 79m, five-deck yacht was delivered to her owner.

The Italian yard renewed its partnership with Zuccon International Project for the external lines, while Laura Sessa designed the interiors of a yacht that features six guests cabins for 12, plus accommodation for up to 39 crew. The yacht is recognised as CRN’s second-biggest build in terms of length, behind the 80m Chopi Chopi, a 2013 launch. 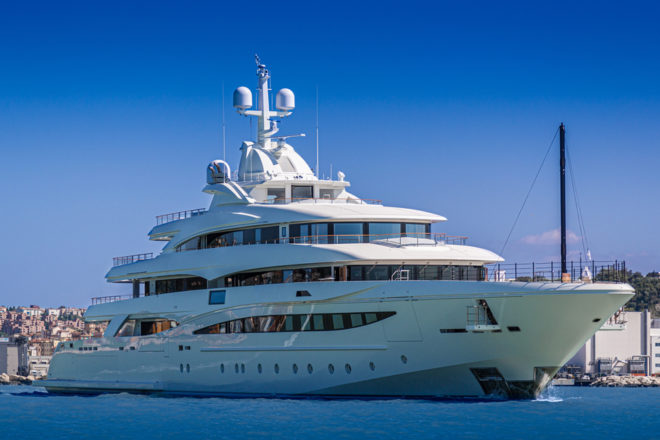 Like Riva and Sanlorenzo, fellow Italian builder Columbus Yachts is exhibiting its largest-ever build at Monaco. Built in 27 months, the 79.5m Dragon has six decks, a 13m beam and an internal volume of almost 2,300GT. Hydro Tec Studio managed the exterior and naval architecture, while Francesco Guida was responsible for the interiors.

The main deck features a large saloon and a dining area with a custom-made 14-seater table by Giorgetti with a Roman travertine top, maple edges and leather legs. Forward are the VIP suite and four guest cabins.

The fourth deck is exclusively reserved for the owner and includes a 110sqm bedroom with 180-degree views, a private foredeck, Roman The bridge deck features a 50sqm wellness area, while the sun deck has a 7m-long pool about 12m above sea level.

Lower-deck highlights include a 200sqm beach club with a bar, sauna and Turkish bath, as well as a garage for 7m and 9.5m tenders. Dragon also has a helicopter landing platform, with three jet-skis housed underneath. 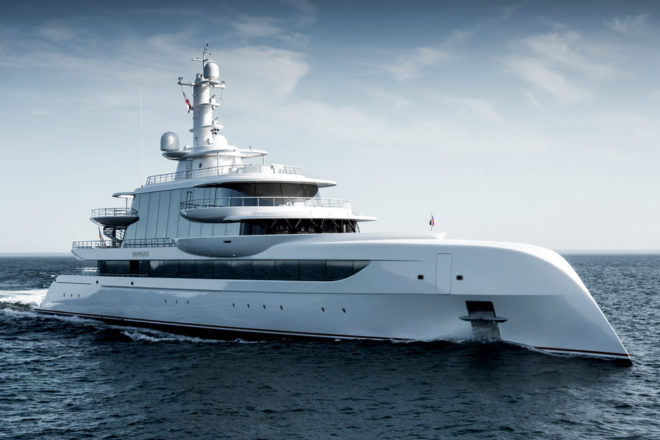 Meanwhile, the 79.95m Excellence by German builder Abeking & Rasmussen is among the most jaw-dropping designs at Monaco due to an almost space-age exterior by UK’s Winch Design, which also handled the interior.

The radical exterior lines include a streamlined reverse bow that could itself be one of the stars of the show along with the huge glass panels in the unique superstructure, which itself features a series of circular designs not usually seen on superyachts. Features include a pool, sprawling beach club, jacuzzi and impressive limousine tenders.

Yet this 79-80m trio are only hovering around the edges of the show’s top 10 longest yachts, a heady collection that features some returning heroes and a few world premieres, including the aforementioned Tis. For more details on this stunning 364-footer by Lurssen, see https://www.luxuo.com/motoring/yachting/lurssen-111m-tis-yacht-style-review.html