Disrupting”, “brave” and “risky” are just a few of the words used to describe the 80m superyacht Excellence, built by German shipyard Abeking & Rasmussen. A yawning expanse of mirrored glass flanks her sides. An arresting triple-height atrium takes centre stage in the interior. Her exterior is akin to that of a spaceship. 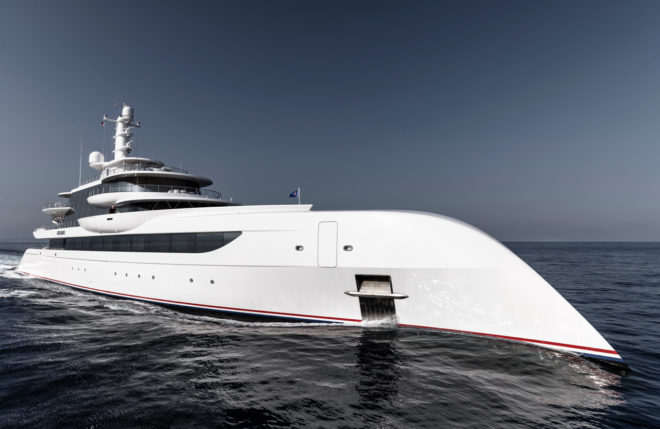 Excellence has a bow shaped like an American eagle’s beak, plus red and blue stripes above the waterline, a feature on the American owner’s previous yachts; Exterior Photos: Guillaume Plisson For Abeking & Rasmussen (Cover Photo: Tom Van Oossanen)

Excellence is a yacht with a difference and she duly played a starring role at the 29th Monaco Yacht Show last September where she made her international debut. She even scooped Finest New Superyacht and Exterior Design prizes at the show’s Superyacht Awards Ceremony, praised by the judges for being both contemporary and versatile.

The sixth incarnation of this aptly-named vessel, and the fourth by Abeking & Rasmussen, Excellence is a masterclass in artistic discipline, a fine balance between creative freedom and owner’s lifestyle.

Owner Herb Chambers is experienced in the art of yachting. Recognising originality when he sees it, the American plucked a five-year-old Winch concept off the shelf (albeit a 120m version) and set about making it his own. 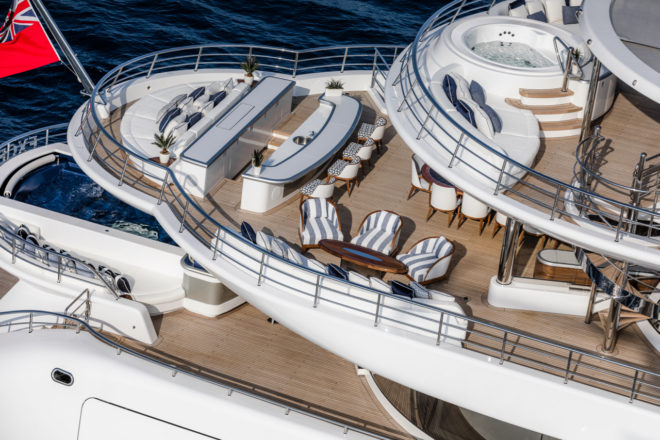 In tribute to the owner’s love of cars, circles are used throughout the design including for most of the outdoor areas

“The client looked at the concept drawings and said, ‘that is sexy, different and unique; let’s make it my boat’,” explains Andrew Winch, founder of Winch Design.

James Russell, lead exterior designer at Winch, handled the challenging task of sketching the exterior lines for a yacht that started out at 75m and eventually grew to 80m. From the placement of the glass, to how the atriums work, to the balance in the swimming pool and the varying ceiling heights, the job took precision and courage.

Winch says: “It was extremely difficult to get the exterior lines right because there are very few lines. If you get the sheer lines wrong, it looks fussy. It’s very difficult to get it to look this simple and it’s different in every place to any other boat that has been drawn.”

A patriotic nod to America is evident in both Excellence’s head-turning, rear-inclined ‘American eagle bow’ – inspired by the shape of the bird’s beak – and the red and blue stripes on the water line, the latter a design quirk Chambers has featured on all of his yachts. 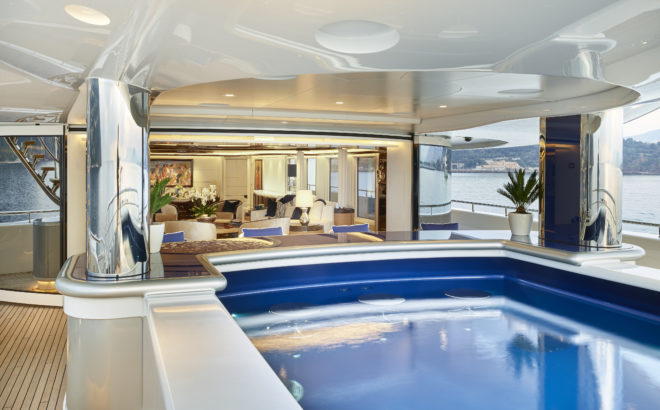 The main swimming pool is on the aft main deck

A sculpture of the bird – one of only two in existence; the other resides in the White House – sits in the main-deck atrium.

“The interior was accommodated to the client’s lifestyle. He likes  to sit looking on to the swimming pool, and he wanted all the guest bedrooms on one deck, with very big windows,” Winch explains. “But we had planned the vast windows along the profile from the beginning.”

Affording amazing views and sight lines from all six main-deck guest cabins, the cohesion between the interior arrangement and the complicated exterior is one of the main benefits of undertaking both elements of yacht design, says Winch. 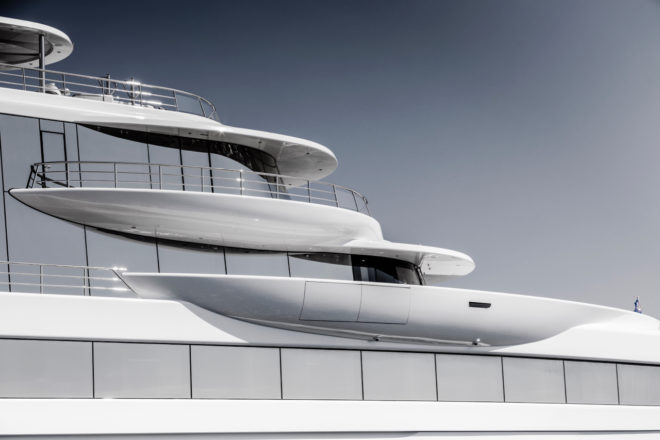 “When you look at the exterior, you notice  a mirrored glass stripe down the side, but for every two panes of glass, there’s a guest cabin; it repeats perfectly,” he says.

“To get that to work, there is no discord between the exterior and the interior; there is no change  of shape because it looks ‘styled’ on the outside without relating to the inside. You walk in and the windows are large. Everything is in harmony and that’s when it starts to work and be unique.”

Stretching an incredible 5m high, and weighing a hefty 1.3 tonnes, the breadth of exterior glass that visually links the main deck, bridge deck and owner’s deck is an engineering first for Abeking & Rasmussen.

Hans Schaedla, CEO at Abeking & Rasmussen, says: “You never know when you start a project if you’ve made the correct decision, especially with something like the glass structure on Excellence. 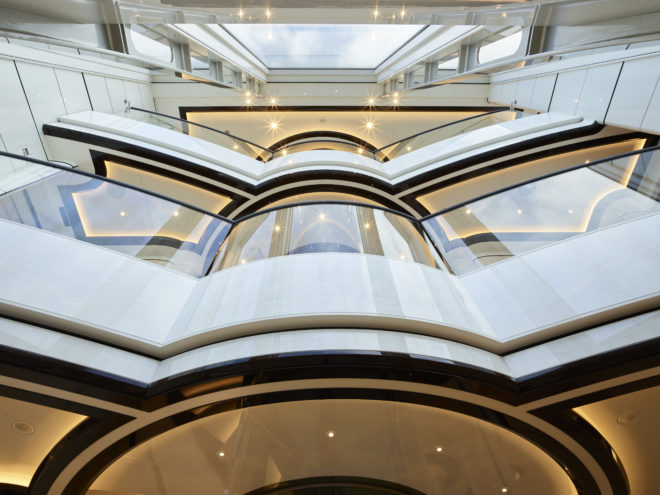 Winch handling both exterior and interior was beneficial for such a complex build featuring 5m-high glass panels and a triple-level atrium; Interior Photos: Winch Design

“It took a lot of engineering and proved very challenging. But the more we progressed into the build, we all believed that we had achieved a fantastic project. And we couldn’t ask for more than the recognition we received at the Monaco Yacht Show.”

Providing a triple-height view of the interior balconies, the  large panes of glass are complemented by the use of mirrored glass throughout the yacht, selected for its ‘dynamic’ appeal, from the treads on the staircase to the panels in the main saloon, and all devised to open up the space architecturally.

Likewise, the range of soft materials selected by Lizzy Hart, Winch’s lead interior designer, serve as both functional and luxurious.

Around 32 different types of stone, from granite flooring to backlit white onyx, feature in areas of high traffic. Textured leather and 3D surfaces create a tactile space, while 24 different types of wood, from oak to Japanese ash to sycamore, work in unison to enhance the calming aesthetic. 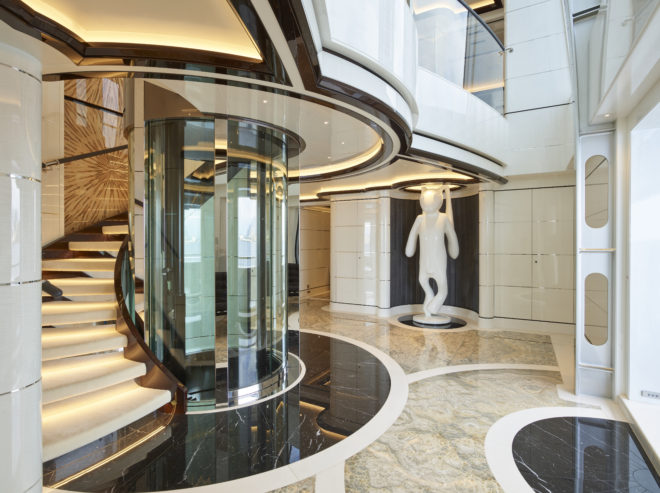 On the main deck, an enormous white rabbit sculpture is a feature of the atrium

No less than two tonnes of ‘teak wood’ stone flooring feature in the luxurious main-deck spa area, equipped with underfloor heating, a sauna with hemlock wood seating, a steam room, massage table and sprawling views out to sea.

Directly connected is the fully-equipped gym with shower room, while adjacent sits the nine- person cinema room. Unusually located forward in the yacht, the areas are virtually noiseless.

Central to the yacht’s design is Chambers’ love of automobiles. Paying homage to his private collection of 25-plus cars, automotive details can be observed at every turn, such as the shape of a wheel in the saloon ceiling, mimicked directly beneath in the patterned carpet.

The six day heads are each inspired by a different car, from a Ferrari Daytona to a navy Bugatti Veyron to a Bentley GT. Silver car grills feature on the sides of the sofas and hallway cabinet, while the custom-made window mullions in the bridge-deck lounge echo the dashboard of a silver 1960s Mercedes. 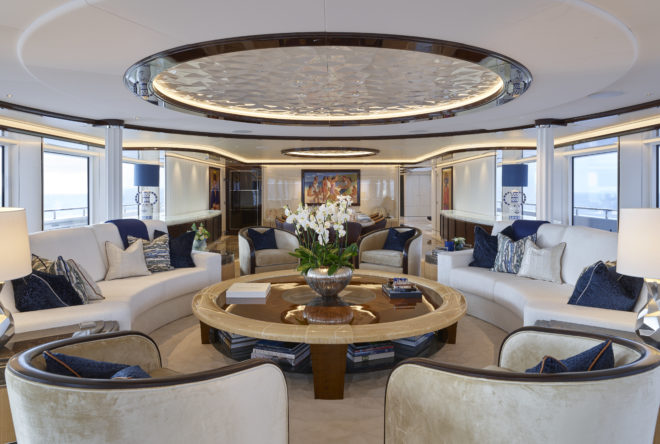 In the the saloon, the circular theme is evident on the ceiling and in the table and seating arrangement

“You may never notice that there is ribbed fabric in the interior,” says Winch, “but ribbing, which is on the fantail of a Cadillac, is part of the interior signature.”

Accessed by the elevator or staircase with high-glossed slabs of cut-through maple on the atrium wall to create a dramatic backdrop, the bridge-deck lounge is a key space for Chambers. Frequently host to both lunch and dinner on the aft deck, the room is among the yacht’s main social hubs.

It benefits from a sunken bar area, intentionally designed to ensure that when guests are sat down in both the lounge area and on the aft deck, they will be at the same head height for ease of conversation.

This floor also houses the owner’s study, which converts into a dedicated sick bay if required, and has direct access to both the bridge and Captain’s cabin. 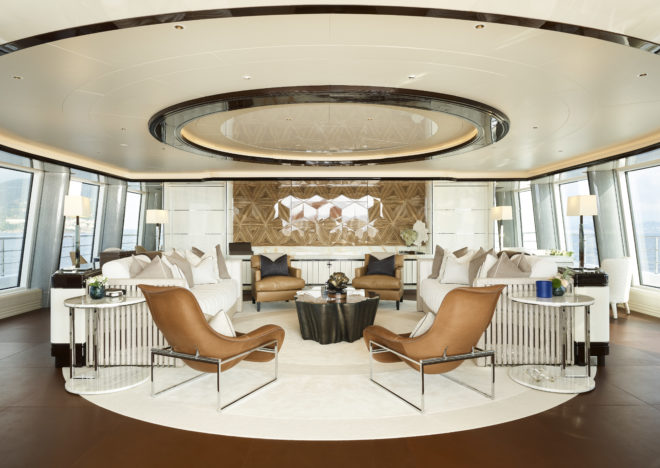 On the upper deck, the aft lounge is an elegant social area

Ray Shore, Captain of Excellence, has been employed by Chambers for more than 20 years, spanning multiple yacht builds and traversing the seven seas together. Their enduring relationship is reflected in the highly generous size of the Captain’s cabin and its luxurious set-up.

Move up one floor, and you discover Chambers’ inner sanctum, the owner’s ‘penthouse’. Panoramic vistas sprawl as far as the eye can see from wraparound, floor-to-ceiling windows in the master suite, so designed to fulfil Chambers’ desire to “feel outside”.

A starburst-wooden wardrobe in the bedroom and the use of Macassar wenge in the intimate owner’s lounge – with room enough for four to dine – continues the coherent design language, while the exposed horizon is further enhanced by the owner’s exterior areas. 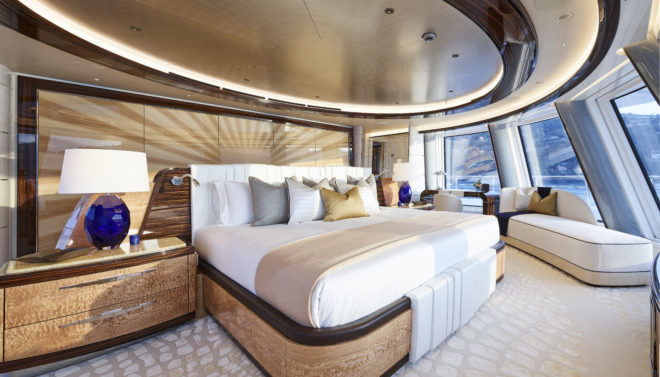 Part of 136sqm dedicated to the owners, the master suite is forward on the fifth of six decks and offers sensational views through full-height windows

Playful artwork is peppered throughout the yacht, from the Mickey Mouse and Tintin sculptures in the owner’s lounge, to a 6ft white sculpture of a rabbit in the atrium, and even a painting of a dog with a Porsche balanced on the tip of its nose.

But for Winch, his excitement lies in how the yacht reflects Chambers’ lifestyle, which he says is epitomised by the beach-club area on the lower deck. 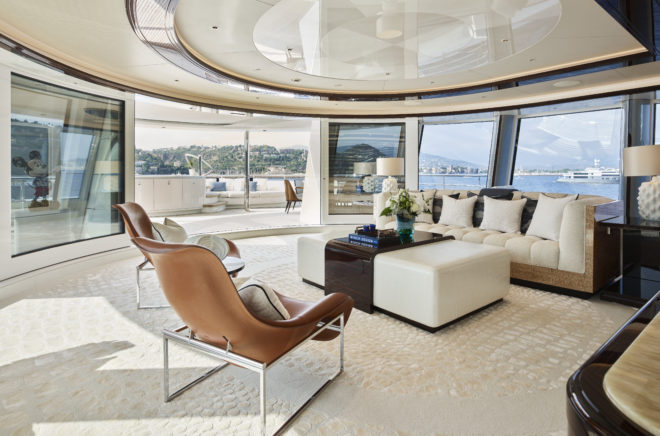 The owner’s lounge is aft and, like the master suite, offers stunning views through huge windows; it also leads to a plunge pool on the aft deck

Likened to celebrity hotspot Cinq sur Cinq in St Tropez, the aft beach club marries relaxation by the water’s edge with easy access to the water toys, all wrapped up in a luxurious yet practical style.

When basking in the warm glow of the sun, guests can look up and gaze through the glass-bottomed pool on the main deck above. Once evening draws in, guests can take the elevator all the way to the sun deck for a cosy, intimate and private ambience, equipped with a second Captain’s helm and views all around.

“We create art with architecture,” says Winch, proud of his firm’s collaboration with Abeking & Rasmussen. “We have many concepts that are outrageous and different, but Excellence centred around the client and his brief, his dream to have his sixth yacht stand out from the crowd.”

It’s fair to say this goal has been achieved.