To mark the 911’s milestone year, Porsche is launching a special anniversary model based on the 911 Carrera S at the International Motor Show in Frankfurt. 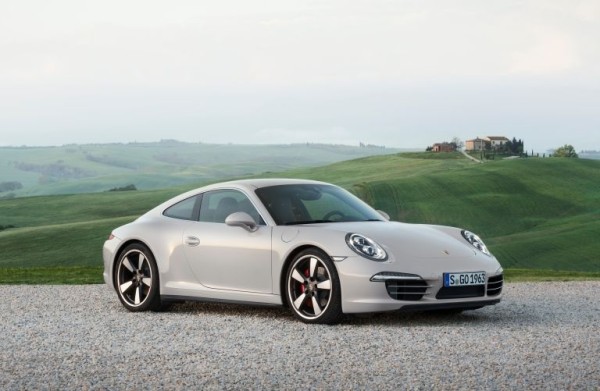 The 911 50th Anniversary Edition will be unveiled this September at the Frankfurt Motorshow, the venue where the original Porsche 911 made its official debut in 1963.

The special edition will boast a 400hp 3.8-litre flat-six engine enabling a 0-62mph (100km/h) acceleration in 4.5 seconds with a manual transmission and in 4.3 seconds with Porsche’s PDK dual-clutch paddle shift system. The car will top out at 186mph (300km/h). Clearly conceived and built for 911 purists, the 911 50 Years Edition will forgo four-wheel drive — despite the power on tap — in favor of rear-wheel drive.

However, keeping that pendulous back end in check are a number of physical, mechanical and electronic systems, including active sports suspension and Porsche Torque Vectoring (PTV) with rear limited slip differential.

In terms of outward appearance, the anniversary model combines the best design elements from the current Carrera S model but is 44mm wider across the wheel arches (like the 4-wheel drive Carrera 4). Other unique exterior touches include specially built 20-inch diameter, five-spoke alloy wheels, chrome trim on the engine compartment grille plus enhancements to the front air inlets that will tell those in the know that this is not an everyday 911.

Available in specially mixed (light) Geyser Grey, (dark) Graphite Grey, or black, each of the 1963 examples that rolls off the production line will carry a numbered plaque, prominently displayed in the interior, and a 911 50 badge on the rear engine lid.