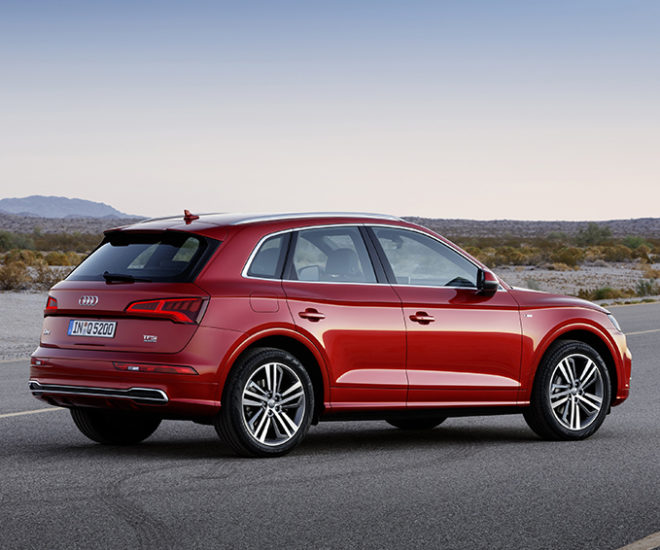 The Paris Motor Show introduced Audi’s second generation mid-sized SUV, the Audi Q5. Developed to stand out against the other offerings in the market, the Q5 is blessed with stronger external styling, more interior space, and greater off-roading ability.

Audi’s Quattro system and rallying achievements gives them the competitive advantage of having vast all-wheel-drive expertise. The car also has a new multi-link suspension set-up, which means that it will be able to shrug off bumpy roads, be better at crossing streams, and perform well as a load lugger. In line with trends in the premium SUV space, the new Audi Q5 is a car that can handle towing a caravan, horsebox or sailboat.

The new model has taken subtle design steps to highlight the car’s capabilities when heading away from perfectly surfaced roads. Its lines are more angular and less swollen. Inside, it has a well-appointed and well-considered cabin with intelligent use of the best natural and man-made materials, since it is an Audi after all. Buyers can choose between a traditional console with an infotainment system, or opt for the company’s virtual cockpit set-up that utilises a multi-purpose, multi-display screen.

The powerplants will consist of four-cylinder and six-cylinder petrol and diesel engines, much like the new A4 and A5 models. Sportier versions of the Q5 will be available in the coming months.

During the reveal, Audi also confirmed that plug-in hybrid versions will also be coming to market in the near future.