Hyundai has teamed with French fashion house Hermes to create the Equus by Hermes, unveiled last week at the Seoul Auto Show. 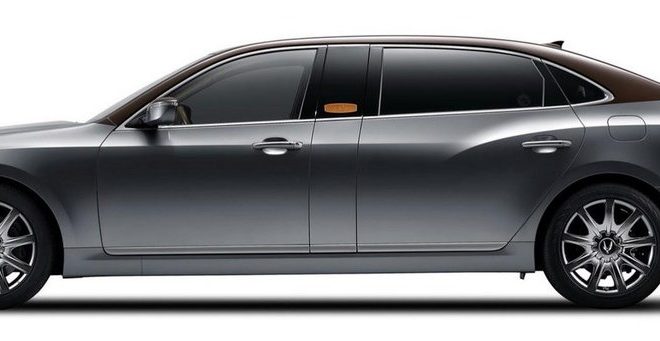 Hyundai has teamed with French fashion house Hermes to create the Equus by Hermes, unveiled last week at the Seoul Auto Show. It follows a similar Hermes edition carried out on the Bugatti Veyron.

Based on the 2012 model year version, the “Equus by Hermes” is a more luxurious edition of the long-wheelbase model, with the exterior tweaks and the cabin styled and customized by Hermes designers. Hyundai says the project is the results of two years of work from designers and researchers in the company’s pursuit of a “modern premium” car. The interior focuses on the harmony of colors and features more than 20 items that were produced by Hermes artisans specifically for this car.

The entire interior is lined with different types of leather chosen by Hermes, with the door panels being lined with crocodile leather, of the same type used by Hermes for some of its famous handbags. Designers drew inspiration from aircraft interiors to design the rear center console of the car, which includes a folding table and four-cup holders, plus a water bottle compartment and a large storage space where a travel blanket can be kept. Only three Equus by Hermes models have been built, none of which is for sale. Hyundai doesn’t plan to launch it on the market, and only aims to improve the brand’s image as a luxury auto maker.