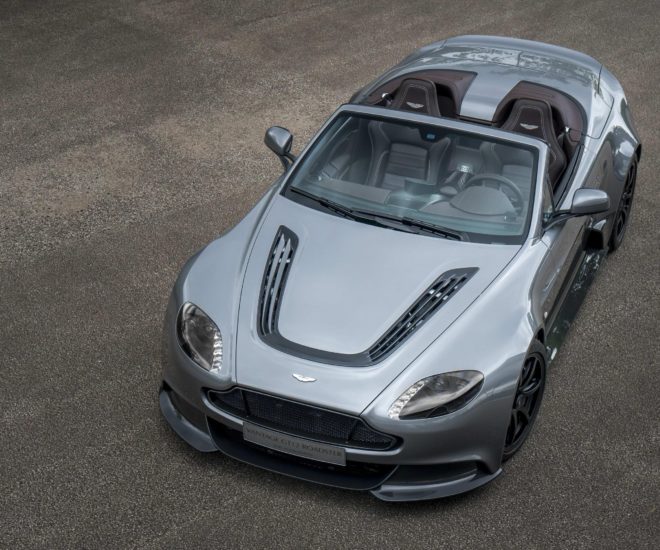 A luxury car company such as Aston Martin is always looking to outdo itself in order to provide customers with the highest degree of exclusivity possible, even creating unique models. Aston Martin elevated its game at the Goodwood Festival of Speed this year, transforming the already limited Vantage GT12 coupe into a special bespoke commission. This whole package was unveiled at Goodwood as the Vantage GT12 Roadster – a drop-top Aston Martin that contains not only a completely reworked performance but a reworked style as well.

Taking such an action as chopping the roof off a car can have serious consequences on overall handling and safety. Thankfully this project was placed in the capable hands of ‘Q by Aston Martin’ – the in-house bespoke customization department. In order to make this drop-top version possible, they reworked the suspension, added magnesium inlet manifolds, a magnesium torque tube plus a titanium exhaust system for better engine breathing and to shed weight.

To give off a sense of visual drama, unique carbon fiber body panels are utilized all over the model. There’s the engine bulge in the hood, the reimagined door skirts at the side, and a rear bumper/diffuser of increased prominence. To keep this exclusive look unique, the owner paid a further premium to ensure Q never recreates this car for anyone else. Yes, this car was made specially for a customer who did not want to share his vision with anyone else. “The Vantage GT12 Roadster is a hugely exciting project. Not just because it’s sensational to look at, but because it vividly demonstrates the expanded capabilities of Q by Aston Martin,” said Dr. Andy Palmer, the CEO of Aston Martin. The company, like a number of premium automotive marques, has been elevating its bespoke services in order to remain competitive in the face of other companies with similar services, such as Mansory. Some limited edition cars done up by Q in recent years include the Vulcan, the Aston Martin Lagonda Taraf and the limited edition hyper car, the One-77.

“In just nine months we took a customer’s dream and realized it, with a fully-formed, exactingly engineered and fully road-legal one-off. That is the essence of the Q by Aston Martin service” said David King, Vice President and Chief Special Operations Officer. With this project done, the company puts forward a good case for their capabilities to fit in with the customer’s unique desires. You can expect more and more specially tailored designs to start appearing out on the open road, soon enough.