Aboard Dunia Baru In The Wake of Wallace

[Story by Mark Eveleigh] Over 150 years ago naturalist Alfred Russel Wallace explored a virtually unknown chain of islands south of Ternate, in what is now Indonesia. His findings helped to change what we know about the natural world. Here, I set sail on my own voyage of discovery on Dunia Baru – famous as one of the most luxurious traditional phinisi superyachts ever built in Indonesia. It was strange that the first creature we should come across on little Bacan Island was what Alfred Russel Wallace would have called ‘a warm-blooded quadruped’. Having read Wallace’s book The Malay Archipelago, I was under the impression that such creatures were spectacularly rare in the Maluku Islands. The quadruped didn’t seem to realise that he was a novelty however; the dog just wagged his tail and looked a little sheepish, as if he wasn’t quite sure how much fuss he was supposed to make about strangers arriving in his little village. I’d just pulled the sea kayak up onto the sandy beach and was wondering where the quadruped’s owners might be. Bacan Island was known to Wallace as ‘Batchian’ but it seemed that little else had changed in the 150 years since the great naturalist landed here. The timber huts and the bamboo platforms in the coconut plantation would certainly not have surprised him, and even if Wallace had turned to look out towards the bay there would have been little in the outline of the statuesque timber phinisi that would have been unfamiliar.

Dunia Baru’s sleek teak and ironwood hull might have been instantly recognisable everywhere from Makassar to Papua, but the cut of her English gaff rigging might just have inspired a moment of homesickness in the exiled Welshman. Then again, Wallace’s shrewd observations were legendary, and he surely would have noticed the gleaming domes of space-age KVH communications and navigation systems. Without Wallace’s clear-sighted observations and indefatigable curiosity it’s likely that, even today, the natural wealth of the great Indonesian archipelago would not be so well understood. It was Wallace’s simultaneous inspiration that goaded his contemporary Darwin into publishing On the Origins of the Species.

Sleepy Bacan Island (less than 80km long) remains almost unknown to the outside world, yet it played an immense part in how Wallace started to piece together the great evolutionary jigsaw puzzle. Like Wallace, we’d set sail from Ternate, the historic nutmeg island that once inspired a super-power race for the conquest of the Spice Islands. In an era when Victorian explorers and naturalists were taking to the trails with teams of porters and great loads of provisions, Wallace seemed to thrive on roughing it, often setting off into the jungle with little more than a change of clothes and a sleeping blanket. He was over six feet tall and sometimes had to sleep with his feet sticking out of ramshackle jungle huts. He was frequently close to starvation and racked with fever and, at least once, was even reduced to sucking the insect-infested water out of pitcher plants. By contrast I was sailing in a state of luxury that would have impressed a Spice Island sultan of the era. Dunia Baru might have the timeless lines of the Bugis-style phinisi but she is every bit the superyacht: fitted with luxurious cabins and a full-beam master suite that would put a 5-star hotel to shame, and she boasts a level of haute-cuisine gastronomy that would have surpassed Wallace’s wildest fantasies during his years on fish and rice.

Through it all, Wallace seemed to enjoy his companionship with local people all over the islands. He spent six months on ‘the hitherto unknown island of Batchian’ in 1858 and discovered more new species on this little island than almost anywhere else in his extensive travels. For example, Bacan has its own bird-of-paradise, known as Wallace’s Standardwing (Semioptera wallacii) and Wallace noted that this little island is unique as the most easterly point on the globe where monkeys are found naturally. “A large black baboon-monkey (Cynopithecus nigrescens) is abundant in some parts of the forest,” he wrote. Clearly beginning to draw the conclusions that would lead to his famous Wallace Line theory, the naturalist concluded that the monkeys had probably accidentally been introduced by “roaming Malays who travelled with them as pets”.

Days on Dunia Baru tend to get off to a gentle start, and after a couple perfectly brewed cappuccinos, crispy croissants and platters of chilled tropical fruits, I’d paddled the sea-kayak over to Bacan island partly to find out if the monkeys that Wallace documented still roam wild here. A young man called Opi Ibunya – the quadruped’s owner – was the first person I met: “There are lots of monkeys here if you go deeper into the hills,” he confirmed.

Ibunya explained that he makes a living on Bacan as a coconut farmer, producing copra (for coconut oil) in exactly the same way as his ancestors have done for generations. Ibunya didn’t recognise Wallace’s Standardwing from my inexpert description in Indonesian but suggested that I should come back later that afternoon and we could go with his gun and see if we could shoot one. I declined the offer, of course, but it struck me that perhaps times hadn’t changed so much since Wallace was on the island shooting rare specimens almost as fast as he could reload. Although Ibunya had seen occasional modern yachts anchored in the bay, he didn’t think any other foreigners had ever visited his little hamlet. “There are communities with many different tribes here”, he said. “We have people from Ternate, Bugis people, Galela men from Halmahera…”

The waterways of Maluku were first mapped by Portuguese sailors and some of the channels and reefs on the charts still bear references to their passing: Selat Patientie is the ‘Strait of Patience’; Tanjung Gosteh might mean ‘Pleasant Point’. Wallace visited communities on Bacan that retained semblances of Portuguese culture that had remained unchanged for four centuries. By that time only a few words of their language remained but the music and festivals and black suits and dresses were still unmistakably Portuguese. Tidore Island was a suitable inspiration for an Indonesian banknote

I was already asking Ibunya about Portuguese customs when it dawned on me that there was no way he could have recognised which traditions might be Portuguese: “…apart from soccer”, I added lamely, but I doubt that was a Portuguese tradition 400 years ago. I would have liked more time exploring Bacan but Dunia Baru’s expert crew of 18 would soon be weighing anchor. Our only fixed destination was Sorong, West Papua, but there was a whole chain of islands we intended to explore along the route. Happily the pirates who infested the tangle of channels and islets west of Bacan at the time of Wallace have long since disappeared.

Manned by crews of 50 or more men, their sailing praus would swoop down on traders, secure in the knowledge that if resistance was too fierce they could simply paddle to safety into the eye of the wind. These days, voyages in this area are far more peaceful and we enjoyed a sun-blessed morning lounging on Dunia Baru’s overhanging aft deck, watching a pod of almost 100 dolphins chasing a school of leaping tuna while frigate birds soared overhead.

We anchored near Silang (meaning Cross) and, while some of our party geared up to go diving in what is considered one of the richest marine environments on the planet, a few of us headed across to the pretty fishing hamlet of stilted houses, where our arrival caused predictable excitement among the scores of local children. The frenzied requests for photos – “Selfie! Selfie!” – were certainly not reminiscent of ancient Portuguese tradition but it occurred to me that many of the villagers would not have looked out of place in Lisbon’s old Alfama quarter. Ternate-based guide Koroy Sarif had joined Dunia Baru for the voyage and he led us to the house of a local baker who was preparing bread (an extremely unusual staple in any Indonesian village) from sago flour. The tile-like slabs tasted only vaguely like bread, but it was easy to imagine that ship-wrecked Portuguese sailors might have come up with just such a method of converting sago into something that had at least a passing resemblance to their staple diet. Then we met another woman who was baking truly delicious loaves from what she called ‘trigo’. I was astounded to hear the Portuguese word for ‘wheat’ in such a remote location. “Which is most delicious”? I asked her, “bread or rice”? Her answer would have been considered sacrilege to the average Indonesian: “They’re equally delicious”, she answered. At that moment I had no doubt that we’d found the Portuguese communities Wallace had written about. 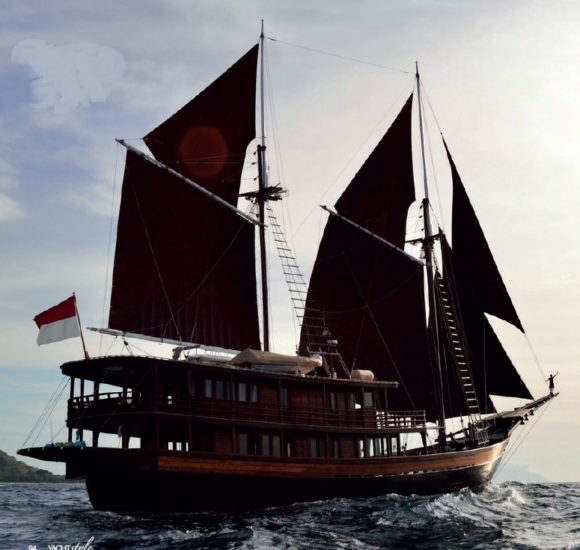 Old-world sailing on the Dunia Baru