We visit another French vineyard, Château La Coste in Provence to find out what makes this the perfect place to sample some of the country’s finest wine. 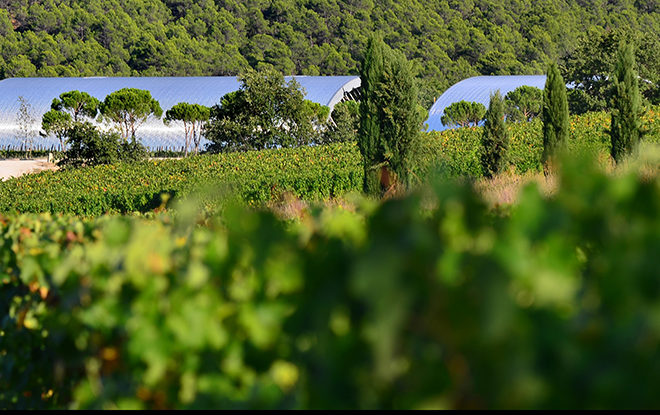 Located just a few kilometers from the southern French town of Aix-en-Provence, Château La Coste is building a reputation across Europe as a beacon for architecture and contemporary art. It is even possible to take a tour of its art works and architectural structures (15 euros for an adult ticket). After the vineyard was acquired by Northern Ireland native Patrick McKillen in 2004, an open-air gallery was built for artists to show their work. The 200-hectare property is dotted with pieces by Tadao Ando, Louise Bourgeois, Alexander Calder and Frank O. Gehry. A spider by the French artist Louise Bourgeois

Since 2015, a gallery space designed by the architect Jean-Michel Wilmotte has held temporary solo exhibitions. Irish-born American-based artist Sean Scully was the first to inhabit the space, and this year Korean artist Lee Ufan is holding an exhibition of his work following his Château de Versailles show in 2014. His latest works are an extension of his “House of Air,” a chapel-like structure which has been a feature of the château’s artistic experience since 2014. Visitors can also explore the château’s art works at night during the summer season (5 euros a ticket).

The big news for 2016 is that a luxury hotel called Villa La Coste is opening on the site this summer. It will offer individual suites among the vines. Note that Château La Coste won the 2015 prize for wine tourism awarded by the French magazine Revue du Vin de France. Château La Coste is proud of its environmental approach and achieved organic status in 2009. Even the old vines are worked organically. Mathieu Cosse, the vineyard’s winemaker, is aiming for a biodynamic vineyard and the conversion process is underway. The wines are categorized as AOP (Protected Appellation of Origin) Coteaux d’Aix-en-Provence. The vines cover a total of 125 hectares, with 22 hectares of white wine grapes, including the Rolle/Vermentino variety (45%). Red wine grapes account for 103 hectares, and include a substantial proportion of the Grenache Noir variety (40%). The vineyard produces 45% rosé wine, 35% red wine and 20% white wine, and its total annual production is 700,000 bottles. La Coste has two major labels for its reds and whites: Grand Vin and Pentes Douces.