Despite the image here, Virgin Cruises is no longer a thing. Instead, Richard Branson wants you to board Virgin Voyages. 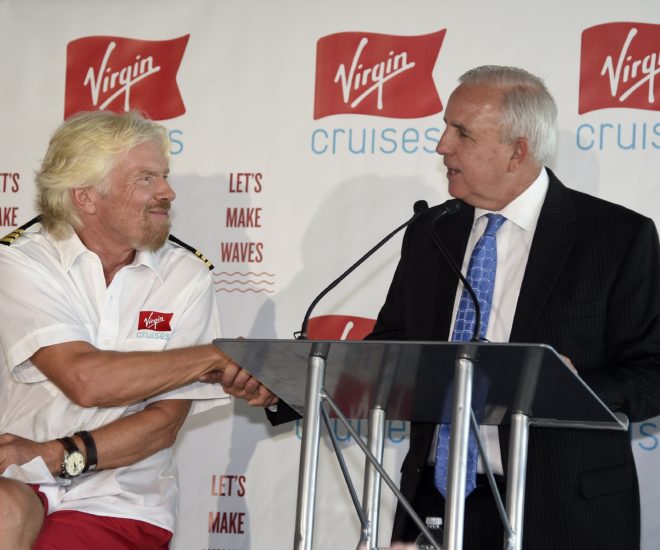 Entrepreneurial legend Sir Richard Branson announced his plans to expand his travel empire into the world of high-end sea journeys with Virgin Voyages. He’ll spend $1.95 billion on this latest venture, which he hopes will radically reshape the world of cruises.

“I have never been on a cruise, and never wanted to – they sound stuffy and dull. But I would love to go on a Voyage – they sound adventurous, exciting and glamourous.” Those are Branson’s words from the Virgin website.

After commercial space travel, hotels, private islands, airlines and trains, Branson has pulled into port with Virgin Voyages, a venture created to address what Branson sees as gaps in the cruise market. You might recall this was once called Virgin Cruises but, Branson has explained why he’s not going with the word ‘cruise.’

We don’t know what exactly Virgin Voyages will be doing to address the whole “dull and stuffy” bit but we do know that the first ship will drop anchor by 2020, in Miami. The US city will be Virgin Voyages’ home port, from where it will set off on Caribbean itineraries. This vessel – the first of three – will host more than 2,700 sailors and 1,150 crew members. All three ships are being built by Italian shipbuilder Fincantieri.

The Climeon Ocean system claims to transform low-grade energy into clean electricity that’s estimated to save 5,400 tons of carbon dioxide annually per ship – an amount that would otherwise take 180,000 trees 30 years to absorb.

The preoccupation with green cruising grabbed headlines this year when the Crystal Serenity became the world’s first luxury cruise liner to sail through the fabled Northwest Passage this summer – a feat made possible by the effects of global warming.

Though shipbuilders made efforts to reduce its carbon footprint with low-sulfur Marine Gas oil fuel, critics lambasted the voyage for what they call a decadent invasion on one of the last pristine frontiers on earth.