First of all, Raf Simons is still with Calvin Klein so fret not. This is about his own label, which he’s bringing over to New York. 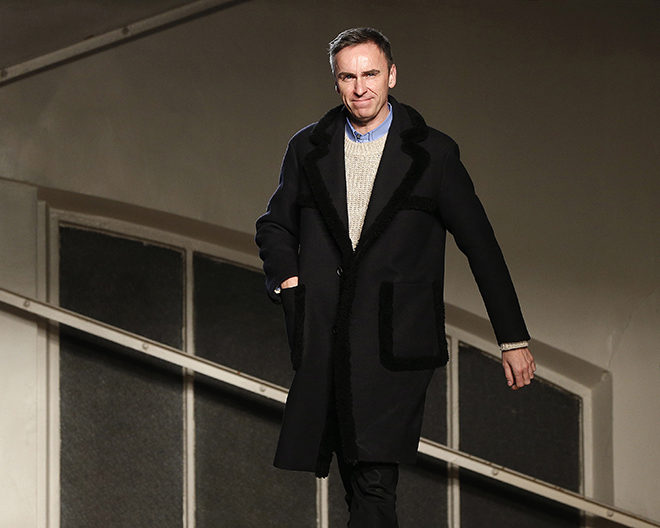 Raf Simons, the Belgian designer and lead player of the recent “musical chair” movement in fashion, announced plans last week to show his Fall/Winter 2017 men’s collection at New York Fashion Week: Men’s next February, making it the brand’s debut on the city’s catwalks.

“Raf is one of the most influential designers on the international fashion stage,” said Steven Kolb, President and CEO of the Council of Fashion Designers of America (CFDA). “His creativity and energy are a welcome addition as we continue to grow this important platform for American menswear.”

New York over Paris? What gives? The stateside move suggests the European designer has global ambitions for his label to crack North America, having shown his Autumn/Winter 2016 collection in Paris earlier this year, followed by a Spring/Summer 2017 collection that was revealed during Florence’s Pitti Uomo menswear event in June.

Color us cynical but perhaps Simons is taking a more US-focused approach to fashion following his appointment as chief creative officer at Calvin Klein. One of the world’s most renowned fashion houses based in the USA, Simons’ move was announced in August. His debut collection for the brand is also set to be revealed for the Fall 2017 season.

Simons stepped down as creative director at Christian Dior last October, following three-and-a-half years as the head of the legendary French house’s womenswear department. “It’s a decision founded on one hand by my desire to concentrate on other centers of interest in my life, notably my own label, as well as the passions that motivate me beyond my professional activities,” he said at the time. Those other passions may have to wait for a while — for now. Simons’ career appears to be going full throttle.