The opening this week of Shang Palace restaurant will at long last answer an unresolved question: Is Paris ready for truly gourmet Chinese cuisine and the prices that come with it? That the capital of fine dining might give an ambitious Asian eatery the cold shoulder is not unimaginable. For most French people, Chinese eats […] 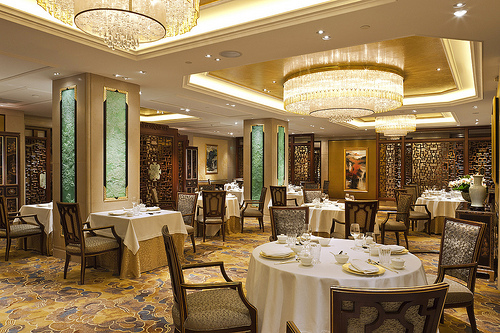 The opening this week of Shang Palace restaurant will at long last answer an unresolved question: Is Paris ready for truly gourmet Chinese cuisine and the prices that come with it?

That the capital of fine dining might give an ambitious Asian eatery the cold shoulder is not unimaginable.

For most French people, Chinese eats rhymes with bottom-of-the-food-chain takeout, not 80 euros for lunch and 120 for dinner per head.

Only one Chinese establishment in Paris has ever shined in the Michelin Guide firmament, and then only fleetingly. Modest by comparison, Chen Soleil-Est earned its lone star — literally front page news across France — in 1999 and lost it in 2007.

Shang Palace, one of three noteworthy restaurants at the new ultra-luxury Shangri-La Hotel, is clearly reaching for its own stars, even if the phalanx of professionals working to ensure its success are reluctant to say so.

But if an early sampling of head chef Frank Xu’s refined Cantonese fare is any gauge of what’s to come, the restaurant will merit every twinkling accolade it gets. What’s more, this is the real thing, which in France is almost as cheeky as the lofty prices.

“There is no adaptation to European tastes. Our aim is to be absolutely authentic,” Xu said in an interview, speaking through a translator.

From the crispy suckling pig to the lion’s head soup to the steamed crab claw in Hua Diao rice wine, the 60-odd items on offer are as faithfully rendered as they would be in a top-tier Hong Kong kitchen.

The only concession to western palates, Xu said, is what has been left out of the notoriously inclusive Cantonese repertoire — no sauteed duck tongues or braised snake on this menu: at least not yet.

On his first foray outside China, Xu brought four sous-chefs to handle key posts in his 20-man kitchen: a chopper, a dimsum maker, a barbecue expert, and a wok chef.

“It can take 20 years to master one’s wok ‘qi’, which is essential for bringing out the true flavour of the ingredients over an intense heat in a short time,” Xu explained.

More than other regional Chinese styles, Cantonese food is lightly spiced “so as not to denature the intrinsic flavours,” he added.

That meant procuring the best, freshest ingredients possible, which has been a challenge, said the Shangri-La‘s executive chef Philippe Labbe, who gave up two stars at Chateau de la Chevre dOr in Eze to oversee the hotel’s trio of restaurants, including his own, L’Abeille.

“We tried 30 different types of duck before we found one that yielded the signature crispy skin of Beijing-style roasted duck,” he said.

In some cases, however, local produce, and especially meats, have been better that what was available in China, Xu said.

Another difficulty was wedding authentic Chinese food to western table manners, resulting in a kind of clash of culinary cultures.

Chinese dishes, brought from the kitchen one by one, are shared by all, whereas the French tradition dictates that each shall have his or her own. Likewise, helping oneself — perfectly acceptable in even the toniest Chinese establishment — is associated in the West with a family-style meal, not high-end gastronomy.

Then there’s the “lazy Susan”, the rotating circular tray in the middle of tables seating six or more.

At Shang Palace, guests at such tables are armed with two pairs of chopsticks, one to grasp from the common plate, and the other to eat with. Wine glasses also had to be adapted so they would not constantly be knocked over while reaching for a tasty morsel of abalone or fermented bean curd.

“We taste tested every day with five or six dishes for weeks. It was an adventure.”

Xu smiled modestly when asked if he practiced a “cuisine d’auteur,” the term for the great innovators that sit at the pinnacle of France’s culinary hierarchy.

“Creativity in Chinese cuisine is not the same,” he said. “In France chefs interpret the tradition. In China, we express it.”