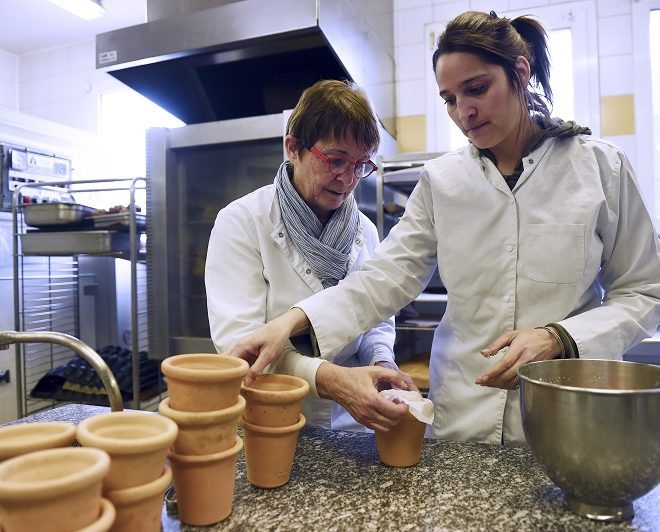 Reine Sammut, the French chef with one Michelin star for her restaurant in Provence, has decided to try gluten-free cuisine to accommodate people taking on the diet. With help and inspiration from her daughter Nadia, a trained chemist with coeliac disease, the chef is offering a special 55 euro ($60) menu, half the usual price, to encourage guests to sample the best of gluten-free dining in L’Auberge de la Feniere

The gluten-free diet has been endorsed by various celebrities such as Miley Cyrus and Gwyneth Paltrow, as well as several athletes. Yet there has been ongoing debate as to whether the diet is actually helpful for people in improving their health. Several have opined that, other than those suffering from coeliac disease, which causes an intolerance to gluten, merely deciding without medical advice to switch to a gluten-free diet may not be the best choice for one’s health. Taking on the diet plan haphazardly may deny one of the necessary nutrients required for the body to function.

Nadia has the other side of the story to offer though. She was hospitalized at age 29, where she spent the next two years bedridden until she was diagnosed with the disease. It is now known to affect about one in 100 people in Europe and the United States. “Thirty-five years ago, doctors didn’t know about coeliac disease,” Nadia says. “The doctors told me that I had destroyed my immune system, I was at the height of the illness.”

She and her mother admit that gluten-free cooking may be faddish in France, but stresses “active awareness”. “We should know what we are eating,” says Nadia, who trains top chefs around the world in gluten-free cuisine. She easily persuaded her mother to drop traditional ingredients in favor of gluten-free alternatives “so that everyone could eat at the same table”.

Other than the Auberge de la Feniere, there aren’t really any Michelin starred restaurants in France who have such a menu, but that doesn’t prevent them from trying. Many top restaurants such as Le Castellaras in the southern resort city of Cannes are prepared for gluten-free requests.

“For Valentine’s Day, one couple never imagined we could offer a gluten-free menu,” said Le Castellaras’s Hermance Joplet, who served up a nutty risotto of locally grown spelt with sauteed baby vegetables for them.

The mother-daughter duo have had quite a few challenges in adapting the restaurant’s house specialties in a gluten-free way though, but they seem to get by. One such dish was truffles in puff pastry. Nadia came up with a blend of chestnut and quinoa flour as an innovative fix. Another signature desert, the Paris-Lourmarin (a reimagination of the traditional Paris-Brest desert) was done up with squash flour and almond extract.

In order to guarantee the absolute absence of gluten, Reine and Nadia have to select the ingredients extremely carefully, ensuring traceability. The restaurant’s pork meat comes from a farmer in the nearby Luberon mountains who feeds his pigs on chickpeas. The fish comes from Martigues, near Marseille. Their rice comes from a farmer in the Camargue who uses weed-loving ducks instead of herbicides. They also grow some of their own ingredients in their own organic garden.

And the bread, also gluten-free of course, is made in clay pots, reviving a baking method used by the ancient Egyptians. “Back then the flour was low in gluten,” Nadia says.

With a wider awareness of symptoms like coeliac disease and other food-intolerance causing illnesses, new ingredients and menus will be created to cater to these kinds of symptoms. Hopefully other higher tier restaurants will learn to follow suit and allow these diners to join the table as well.