A monster bluefin tuna sold for a record 396,000 dollars in the year’s first auction at the world’s biggest fish market in Tokyo Wednesday amid intense pre-dawn bidding. The 342-kilogramme (752-pound) fish — caught off Japan‘s northern island of Hokkaido — fetched a winning bid of 32.49 million yen (396,000 dollars). It was the highest […] 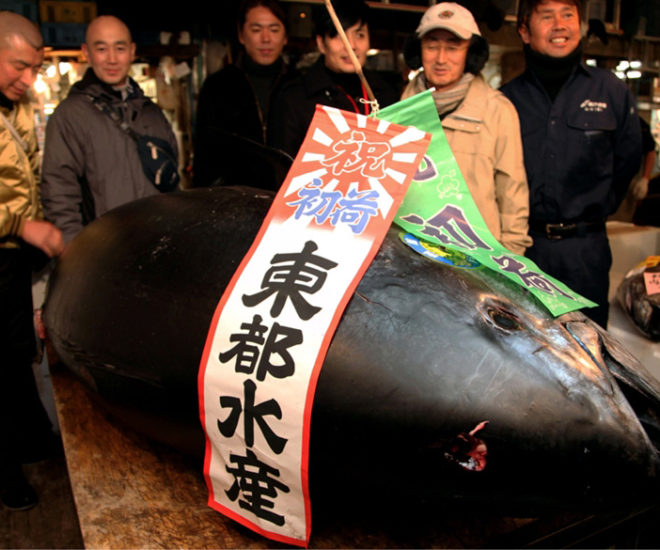 A monster bluefin tuna sold for a record 396,000 dollars in the year’s first auction at the world’s biggest fish market in Tokyo Wednesday amid intense pre-dawn bidding.

It was the highest such bid yet, topping the previous record of 20.02 million yen paid for a bluefin tuna in 2001, the officials said.

A piece of “sashimi”, a slice of raw fish, from the massive specimen would be estimated to sell at up to 3,450 yen at cost price, local media reported.

The fish was bought by a pair of Japanese and Hong Kong sushi restaurant owners who also made the joint top bid for a bluefin in the first auction of last year at Tsukiji, a market the size of more than 40 football pitches.

“I felt relieved,” the Hong Kong sushi restaurant owner told reporters at the market, where a total of 538 bluefin tunas were sold for high prices in the pre-dawn auction.

“It’s a good tuna,” he said. “The high price came because overseas buyers have also been demanding tuna.”

Local media said bidders from China, where the popularity of high-grade bluefin is growing, had helped push the sale price to its new record.

“The globalisation of food led to the high price,” one participant said, according to Kyodo News. “This is good news that enlivens the entire market. I hope the Japanese economy will get a boost and pick up as well.”

Japan consumes three-quarters of the global catch of bluefin, a highly prized sushi ingredient known in Japan as “kuro maguro” (black tuna) and dubbed by sushi connoisseurs the “black diamond” because of its scarcity.