Department store Le Printemps is about to kick off its 150th anniversary celebrations. 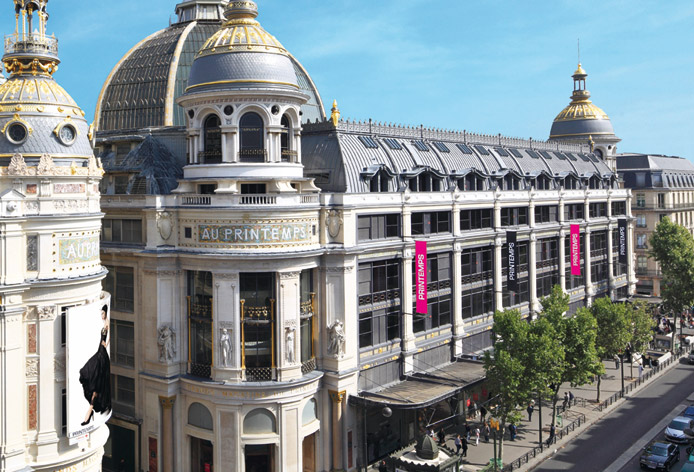 The famous department store and tourist draw on the Boulevard Haussmann in Paris is celebrating its 150th anniversary this year.

Le Printemps is French for spring, so it is only fitting that the anniversary celebration will begin this Friday, March 20, on the first day of the season.

A heritage of innovation and elegance

From the opening of the department store in 1865, Jules Jaluzot aimed to set Le Printemps apart from the competition, and the name reflects this desire for originality. At the time, most rival stores were named either for their founders (Harrods, for example) or their pricing policies (Le Bon Marché roughly translates as “the good deal”).

Jaluzot chose to break the mold, emphasizing Le Printemps as a place where “everything is new, fresh and lovely, just like the name.”

This slogan was accompanied by an annual event, La Fête du Printemps, which celebrated the arrival of spring by handing out violet bouquets to customers at the store’s entrance.

Pink and plenty of flowers

As part of the anniversary celebration, the store’s facade and window displays will be decked out in pink — and particularly in Le Printemps’ signature Rubine Red shade — and in floral motifs.

Japanese artist Hiroshi Yoshii has created Rose, a new pink mascot that will be the face of the festivities. In addition to appearing inside the store in special edition products, the character will greet passersby on the Boulevard Haussmann as a giant 13-foot statue.

Floral prints and the color pink will also make their way into some 1,000 items designed by 400 fashion, beauty and design brands exclusively for the 150th anniversary. These special edition products will be available at Le Printemps stores and through a dedicated platform online.

Of course, no department store celebration would be complete without special window displays, so Le Printemps has invited 11 French and international artists to lend a hand. Each will stage showcases of some of the exclusive items designed for the anniversary.

The Parisian department store has also partnered with La Maison du Chocolat, which will present multiple exclusive chocolate creations in the atrium from March 20 through the end of spring.

Shoppers can also take advantage of eight food stands set up along the store’s facade on the Boulevard Haussmann, which will serve sorbet, hot dogs, waffles, chocolates, cookies and other treats.

There will be a photocall on the roof, cooking demonstrations, cotton candy making and floral bouquet handouts in the store, just like in 1865.

The second part of the anniversary celebration will take place in September, with a special emphasis on the themes of elegance and heritage, as Le Printemps will participate in Les Journées du Patrimoine, a French event celebrating the country’s heritage sites.

The anniversary festivities will conclude around Christmas.