Sotheby’s is offering the highest bidder at an upcoming wine auction the chance to enjoy a dinner prepared by legendary chef Ferran Adrià himself. 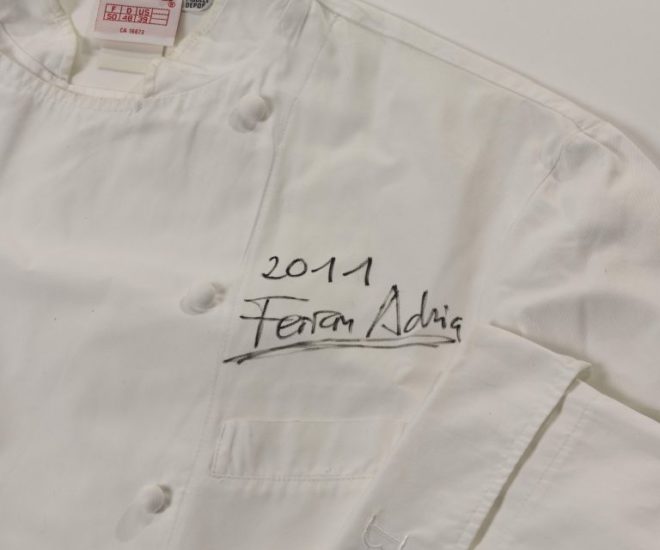 Auction house Sotheby’s is offering the highest bidder at an upcoming wine auction the chance to enjoy a dinner prepared by legendary chef Ferran Adrià himself.

It’s the latest addition to a hotly anticipated wine auction to be held in Hong Kong and New York next month when El Bulli — which has held on to the title of best restaurant in the world five times by “Restaurant” magazine — sells off its wine cellar.

The opening bid for a dinner with Adrià at his Barcelona restaurant Tickets, which he co-runs with brother Albert, starts at $5,000.

Other lots that have been added to the wine sell-off include a chance to snatch various bits of El Bulli memorabilia, including four chefs’ jackets signed by Adrià, a set of El Bulli knives, menus, wine lists, and El Bulli stationery.

Many of the lots for sale are also one-of-a-kind bespoke pieces designed specifically to help execute and serve Adrià’s avant-garde cuisine. Examples include baroque and corrugated trays and crockery for his signature spherical olives.

8,800 bottles of wine, all of which will bear an El Bulli sticker and some of which will be signed by Adrià and restaurant partner Juli Soler, will be auctioned off April 3 in Hong Kong and April 26 in New York.