Things to Do Near and at SFMOMA

With the San Francisco Museum of Modern Art opening doors once again on May 14, the Yerba Buena district is set to become a cultural and artistic powerhouse. 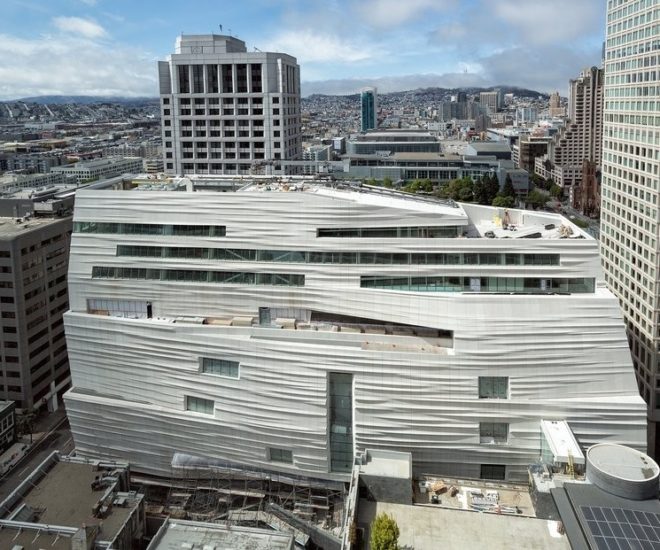 With the San Francisco Museum of Modern Art opening its doors once again on May 14, its neighbors in the Yerba Buena district aim to celebrate things with a day of performances and free entrances to nearby museums. All this adds up together for an area bustling with artistic activity over the course of the next few months, especially with the planned arrival of two new galleries by major dealers. These are the things to look out for over at San Francisco when the museum finally opens.

The Campaign for Art: May 14 to September 18

Results of a fundraising campaign done from 2009 to 2015 led to the acquisition of a number of works that increased the SFMOMA’s collection by 10 percent. Now the museum can finally showcase its newest acquisitions in this exhibition running until September, with key highlights from Jackson Pollock, Jasper Johns, Robert Rauschenberg, and even an entire gallery dedicated to Joseph Beuys.

California and the West: May 14 to September 5

This exhibition, with its title taken from photographer Edward Weston’s book, is a celebration of what the region stands for, and how it’s been used over time, with a focus on the spirituality of wild nature. The photographs range from the early days of photography in the late 19th century to the present. Artists featured include Ansel Adams, Imogen Cunningham, Dorothea Lange, Ed Ruscha, Edward Weston and others.

The international art dealer moved into a gallery across the street at 657 Howard. The first exhibition up in the gallery, named Plane.Site, will focus on the “dynamic exchanges between drawing and sculpture”. The works within the exhibition will put the tension between the 2nd and 3rd dimension up on display, featuring artists such as Cy Twombly, Andy Warhol, Richard Diebenkorn, and Louise Bourgeois.

This major dealer also expressed an interest in moving his San Francisco gallery over next to the Gagosian, planned for October.

Yerba Buena Center for the Arts – Take This Hammer: Art + Media Activism from the Bay Area

This art center has been running for more than two decades already, and was a part of a project back in 1993 that led to the development of what is now known as the Yerba Buena cultural district. The exhibit currently on show, entitled Take This Hammer, examines the social activism of contemporary times, looking at uses of performance, visual art, and technology within the act of protest.

The latest exhibit in this historical society will be a photography exhibition by Janet Delaney and Ira Nowinski. It will look through photographs taken during the 1970s and 1980s when the area was the object of a transformation from a working-class quarter into a business and entertainment district.

This was originally a landmark power substation from 1907 that was adapted into a museum by the architect Daniel Libeskind, and aims to mark out the “diversity of the Jewish experience relevant for a 21st-century audience”. Looking over the life of one of the greatest American directors of all time, the Kubrick Exhibit this coming June will sketch out the mind of the genius through annotated scripts, production photography, lenses and cameras, set models, costumes, and props. It will also look at some of the unfinished projects that the ambitious Kubrick never managed to complete in his lifetime.

The MOAD is a special museum that explores the much underrepresented art of the African diaspora. Two of these exhibitions currently on show include a look through the influence of model, actress, and singer Grace Jones through works done by other artists, and also a photography exhibit re-examining the idea of black masculine identity.