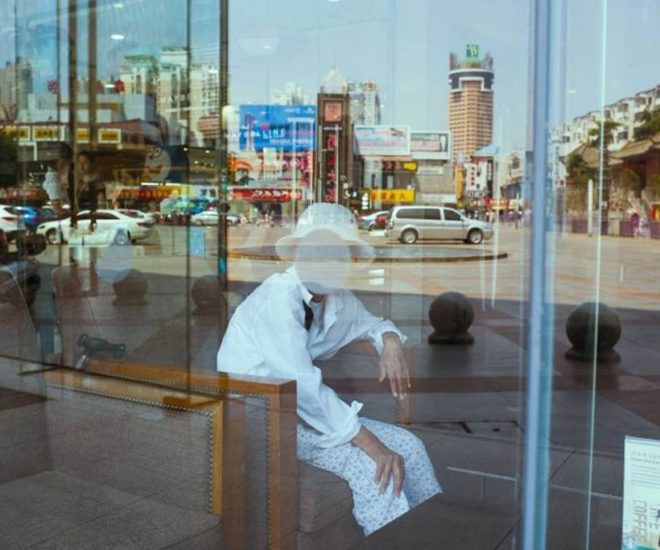 Since 2005, Tao Liu has been working as a water meter reader in the city of Hefel, located in Eastern China. He knows the city like the back of his hand- its streets, lanes and shops. Everyday he travels around the city on his motorbike, reading water meters for a local utilities company. For the past 3 years, Tao Liu, now 32 years old, has used his free time to capture witty and intriguing photographs of sightings on the street during his daily rounds. Although Liu has no training in photography, he cites Daido Moriyama (who is often referred to as the father of street photography in Japan) as one of his influences. “I found him [to be] a very focused photographer,” says Liu in an interview with TIME. “I chose my camera based on what he uses.”

His photographs are intimate, funny, uncanny and sometimes disturbing. For example, he takes a photo of a face (actually printed on a newspaper at the bottom of the crate) being suffocated by green peas and another photograph of a man on an advertisement that seems as if he is up skirting a passerby. Peoples’ identities are also obscured, adding to the uncanny vibe of the pictures. Each photograph captures a humorous moment and situation he notices on the streets- specifically in relation to the commercialization within it. “I like taking photos because I can hang around on the streets and capture an image when something interested me but was neglected by others,” says Liu, “I want to remind people of the touching moments in life.” See more photographs on Lofter.