Poole, on England’s south coast, is home to the gigantic Sunseeker shipyard where its distinctive white-hulled models can be viewed from far.

Poole, on England’s south coast, is one of the world’s largest natural harbours and its foreshores feature the extensive Sunseeker shipyard. Clusters of distinctive white-hulled models, in-water and in sheds, can be seen from afar, dominating the CBD waterfront except for occasional passing ferries plying to and from Cherbourg in France. In Oct 2018, it even announced it would be building its aluminium-built yachts. 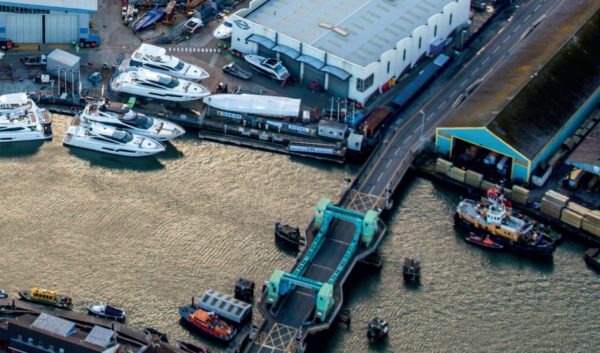 Here buyers looking to customise Sunseeker Yachts, such as the flagship 131 or 116, may put up at the pleasant nearby Hotel du Vin, and sample local langoustines on ice at celebrity chef Rick Stein’s Sandbar restaurant out on the spit, while contemplating their layouts and colour schemes. Other specialist facilities in Poole and in Weymouth complement the principal production base, providing employment for some 2,500 marine craftsmen and women. A huge Technical Centre in the suburbs, for example, houses a bevy of leading designers, such as Ewan Foster, who have shaped and updated Sunseeker profiles and interiors since the legendary Don Shead helped to develop the brand from its early racing and runabout days. Dozens of other skills that make up the sheer artistry of boat building are on display here, from the intricate woodwork and lacquering to the creation of bespoke fixtures and fittings to complex instrument consoles that will later guide a Sunseeker helmsman.

“A hawk’s eye, expert hands, and a devilish attention to detail” is how the renowned yard puts it. In an age of digital production and automated assembly, we stay committed to creating hand-built, hand-finished boats, for one simple reason. There is no better way to craft an exceptional product. No machine can ever give our boats such spirit, or take such pride in their creation. Just like our customers, every yacht is unique. Tastes may differ, layouts may change, finishes may alter. But one thing is constant. Our passion and commitment to giving all our customers the opportunity to tailor and personalise elements within their yacht, whatever the size”. 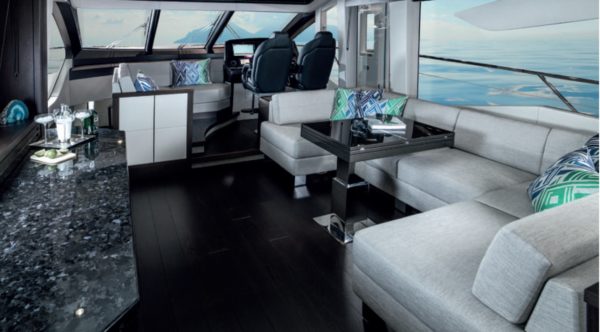 The yard does bow to some degree of automation, of course. Strolling about, one notices 5-axis cutters, and interiors of the new Predator 50 in Weymouth, smallest of the range, are being built as modules in Poole. Currently, it offers 12 models, including the 74 Sport Yacht which will be debuted in Cannes in September. In fact, 90 per cent of its range is newly released in the last two years, part of a dynamic push by CEO Phil Popham, who took the helm in January 2015. Sunseeker Yachts are available in 131, 116, 95, 86 and 76 feet lengths. The latter won the Christofle Yacht Style Award for Best International Motor Yacht last January in an extremely strong field. We also reviewed a Yacht 95 in the Philippines of the last issue. Then comes the sleek Sunseeker Sport Yachts at 74 and 68 feet, the iconic Sunseeker Predators at 74, 57 and 50 feet, and the luxurious Sunseeker Manhattans at 66 and 52 feet. Other models like the Sunseeker Portofinos have been dropped, although the title survives on conference room doors at Sunseeker House in Poole. The Manhattan 52, launched at Cannes and Southampton in 2016, has quickly become Sunseeker’s fastest-selling model of all time, with over 100 orders, including three in Japan, and one each in SouthcKorea, Hong Kong and Singapore. The yard has also now built 129 yachts over 100 feet, regarded as a base for the term “superyacht”, and has begun showing vessels like the Yacht 131, 116 and 95 at Monaco Yacht Show. It produces around 150 boats a year, which may seem at odds with claims of bespoke fit-outs, but the principal shipyard is so big as to allow specialised builds of particular models in their own space, and underlying this is “an uncompromising approach to design, craftsmanship and performance”. It is a far cry from when the brothers Robert and John Braithwaite founded Poole Power Boats in 1969. The company changed its name to Sunseeker International in 1985. Both siblings were instrumental in its success. Robert became the familiar public face of Sunseeker at home and abroad, and remains the Company Ambassador, while John only retired from his Technical Director position in May. 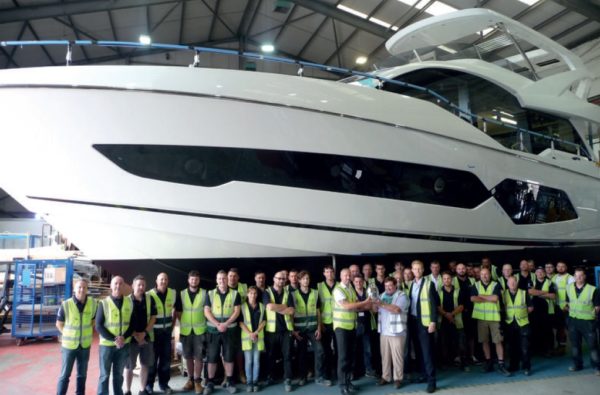 The 2008 GFC cast a long shadow over boat building in many parts of the world, however, and Britain was no exception. Sunseeker sailed through the worst of the weather, but the Braithwaites were getting no younger. In August 2013 a 95 per cent stake in the business was sold to the Wanda Group, the Beijing headquartered conglomerate which has strong footprints across China, Europe and America. 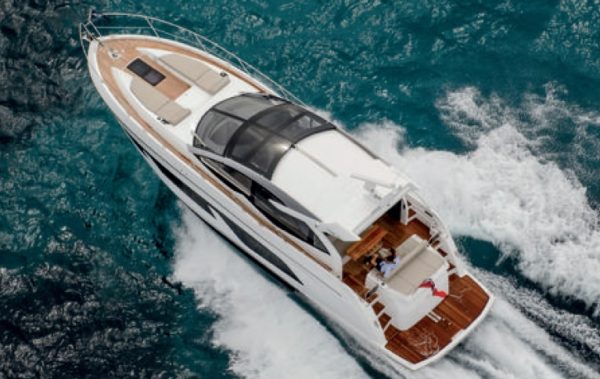 The Chairman of Sunseeker Asia, well-known Hong Kong-based Gordon Hui, noticed Wanda executive interest in the company, which has long had a Sunseeker 108 in Shanghai. The Wanda involvement is seen as that of a committed long-term shareholder, providing strong financial backing for Sunseeker’s continued growth and success. In January 2015 they appointed Phil Popham as the company’s CEO, and financial results have been steadily improving since. An HSBC-financed five-year development program was approved this year, aimed at increasing Sunseeker’s presence in world pleasure boat markets still further. It now has professional dealers in 74 countries, and service and product support centres to match. See Profile on Popham that follows.