Light may be intangible but that hasn’t stopped the Van Cleef & Arpels  Midnight Nuit Lumineuse from playing with it in its latest poetic display  of time. 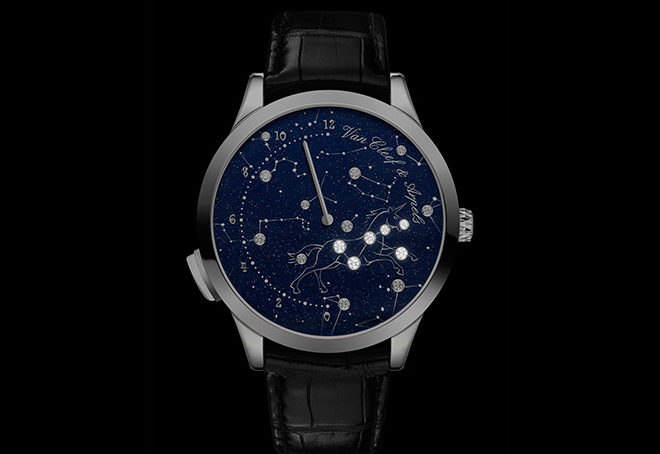 Since its debut in 2006, Van Cleef & Arpels’s Poetic Complications collection has been defined by the creative display of time using purpose-built complications. The maison’s unique blend of artistic and technical savoir faire has created several icons over the years; who could forget the Lady Arpels Pont des Amoureux, which depicts a rendezvous between two lovers on a bridge using a bi-retrograde module? Or the Midnight Planetarium, whose dial reproduces the orbits of our solar system’s inner six planets, and their actual positions vis-à-vis each other? Indicating the time poetically continues this year with the Midnight Nuit Lumineuse, a time-only watch that, quite expectedly, does more than just that.

The Midnight Nuit Lumineuse indicates the time with a single retrograde hand that sweeps from six to 12 o’clock. Design wise, the watch clearly means to evoke a nocturnal view of the heavens, beginning with a dial of aventurine that mimics the night sky. Upon this canvas, the maison has drawn a star chart showing various constellations through miniature painting and diamond setting. The most eye-catching among them is obviously Monoceros the unicorn, which appears as an array of six diamonds set in a detailed drawing at four o’clock. Far from being just the biggest and most detailed constellation on the dial, Monoceros is also its highlight – literally. Actuating the pusher at eight o’clock brings the unicorn to life, as its six diamonds are each backlit by a single Light Emitting Diode (LED).

The electricity powering these LEDs isn’t from a battery. Rather, the lighting module within the watch relies on piezoelectricity, which is generated by some materials when they are mechanically stressed. In this case, a cantilevered ceramic blade functions as the ‘turbine’ – pressing on the pusher makes it vibrate, and the physical deformation from its flexing to and fro generates the current to power the LEDs for around four seconds.

According to Van Cleef & Arpels, the lighting system in the Midnight Nuit Lumineuse holds much potential for further development. The type and cut of the gemstone used, for example, will affect its color and brilliance. The specifics of the circuitry, on the other hand, will determine the brightness and number of LEDs used, and whether they can be flashed in any pattern or sequence. For now, the lighting module is the subject of a patent application for the maison.