Chanel’s Monsieur de Chanel is deliciously poised at the crossroads of beauty, masculinity, and complexity. 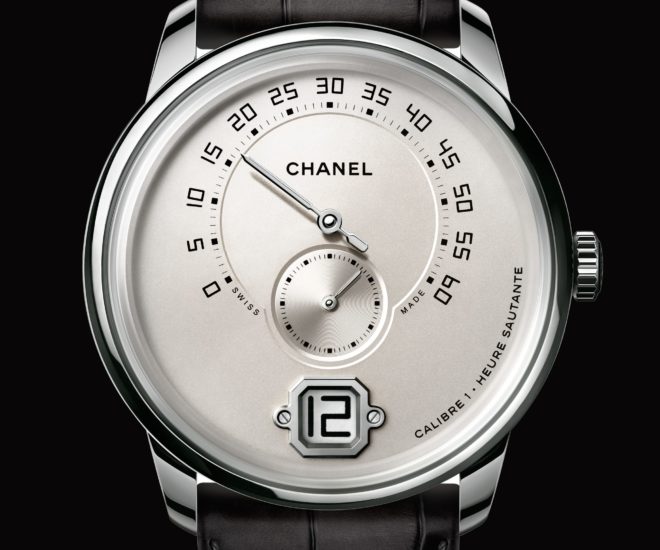 Some of us have to look up the Internet to check if Chanel makes clothes for men but even those of us who do, need no introduction to the label. It is, without doubt, a fashion behemoth with brand recognition stretching as far across the globe as there are paved roads. When a fashion label with such clout and experience dips its fingers into watchmaking, it brings with it tremendous knowledge and sense about making beautiful things that consumers desire, even if watchmaking is a specialized field not traditionally within its area of expertize. But though relatively late to the party, Chanel is by now no stranger to watchmaking, having demonstrated serious intent from 2000, with the launch of its J12 watch, now an icon in its own right, in a bewildering range of colors, beloved of women, and men.

For 2016, it has created a new timepiece from a clean slate, specifically for men. The Monsieur de Chanel is fitted with Chanel’s first in-house movement, aptly named Calibre 1, designed, developed, tested, and assembled in-house. According to Chanel, Calibre 1 was five years in the making, and it looks a stunner for it. Offering jumping hour, retrograde minutes, and a flying tourbillon visible from the case back, the movement is a handsome play of matte and glossy black from ADLC coating of its circular skeletonized bridges. Two barrels coupled in series supply the manual-winding movement with a healthy three-day power reserve. A lion’s head seal on the movement marks the Calibre 1 as an in-house creation. On the dial side, the Monsieur de Chanel looks to be yet another icon in the making for Chanel. Time display is neat, ordered, and symmetrical to say the least, and there’s wonderful clarity to the elegance. Five-minute markers in bold allow instant reading of the time, as the gold minute hand sweeps across the 240-degree spread of the retrograde minute scale, while the instant jumping hour resides in an octagonal window meant to evoke the layout of Place Vendome. We like the blocky typography, too. It is not dissonant with the overlapping circles of the time display and case shape, but in its restrained way, brings an element of retro-tech definition and purpose to the aesthetic.

Besides securing patents for the jumping hour and retrograde minutes display, and bi-directional setting for the minutes, Chanel also created a new alloy for the case – beige gold.

The Monsieur de Chanel is produced in a limited run in 2016, of 150 numbered pieces each in beige gold and white gold.