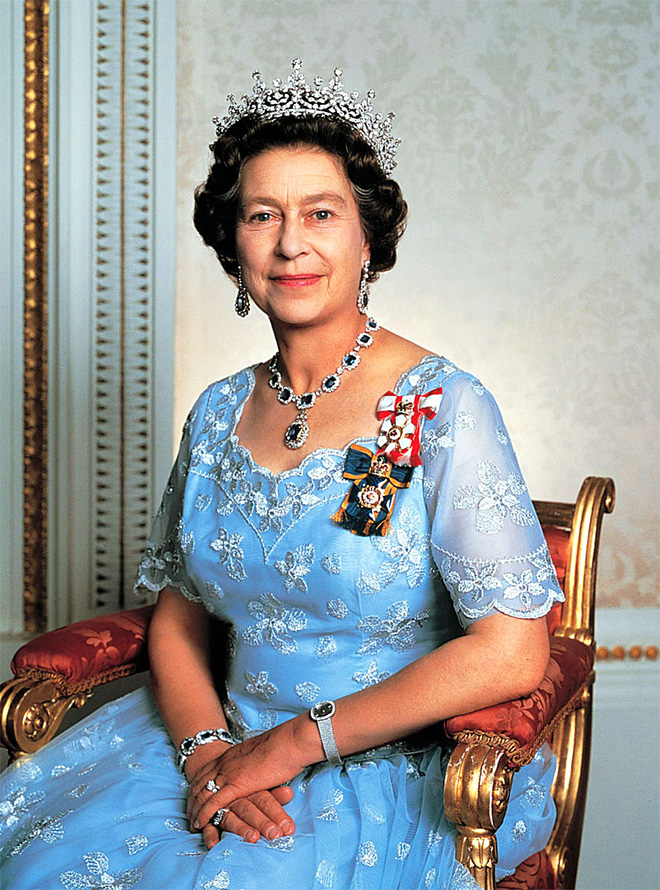 Women are no strangers to “form” or shaped watches (a rectangular or square watch is a shaped watch). Pictured here, Queen Elizabeth is wearing a Patek Philippe Golden Ellipse, 19 years before the inception of the Twenty-4.

When Thierry Stern, President of Patek Philippe, launched the new ladies’ automatic Twenty-4 in Milan, he declared that the era for a new generation of women’s mechanical watches was upon and that after five years of research, 40 prototypes and countless variations of case, bezel and bracelet design, the latest Patek Philippe Twenty-4 was the brand’s vision of what women wanted – functional design. 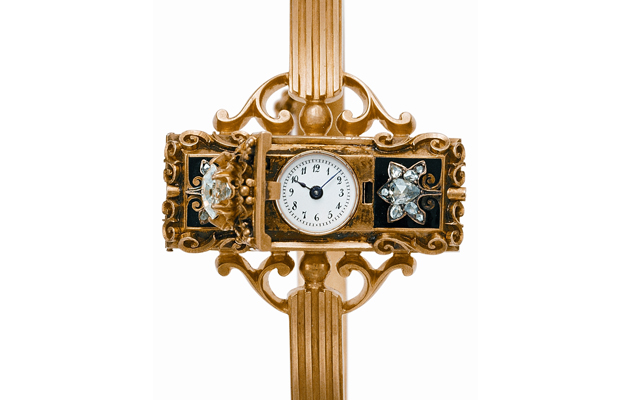 Hungarian Countess Koscowicz’s Patek Philippe was more costume jewellery than a ‘timepiece’ but nevertheless, it is still a form watch.

That said, when first introduced in 1999, the original Twenty-4 was already quite a departure from Patek Philippe’s usual offerings – offered along with a stainless steel bracelet, the first Twenty-4 reference, 4910/10A, was constructed in enduring steel rather than the usual precious metal material like white or rose gold. inspired by the men’s Gondolo watch of 1993 – a timeless  Art-Déco classic, the pioneering ladies’ Twenty-4 mirrored the historical affinity for women of achievement (Queens, Countesses, Aristocrats) – after all, the its muse was taken from a model harkening back to the era of the famed Patek “Gondolo Gang”(essentially a club of three-piece suit wearing gentlemen with Mexican sombreros affixed with the word ‘Patek’) since 1/3 of all Patek Philippe production being retailed through Rio-based jewellers Gondolo & Labouriau during World War I, it could be surmised that the inaugural Twenty-4 was the ultimate feminist wrist-icon where none had existed. This was something especially for women, a ladies’ watch collection unto itself – not merely some feminised, bejewelled, “reduced” men’s edition. 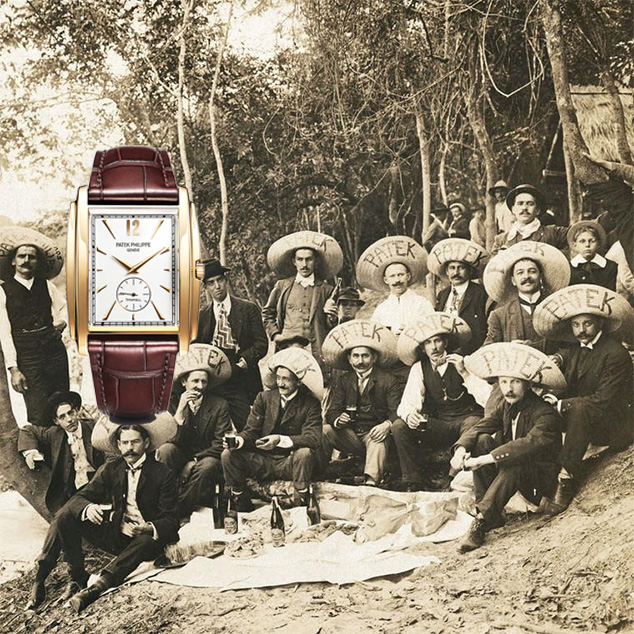 The Gondolo Gang of three-piece suit wearing gentlemen with Mexican sombreros, some of the most influential Patek Philippe consumers in Brazil. Patek eventually named a model after them and you can see the design cues which followed 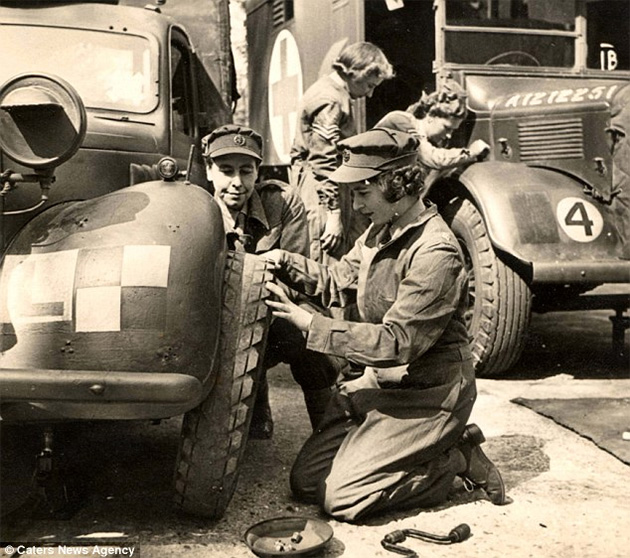 Queen Elizabeth was a war time mechanic and ambulance driver in World War II. Patek Philippe answered the question of a robust yet elegant watch specifically dedicated to active women. Women might not have had their own club ala Gondolo but at least they now had their own watch in the Twenty-4 in 1999

While the shift to larger, more complicated women’s watches is a relatively recent development, the historical trend was that most women’s watches were designed to be smaller, elaborate diamond-set affairs and often, a combination of watch-accessory, designed to convert or be detached from its companion brooch or bracelet. Over time and in part, heralded by Patek Philippe, whether as a keyless winding system  or as a contemporary, highly functional, multi-task, multi-situation women’s Twenty-4. 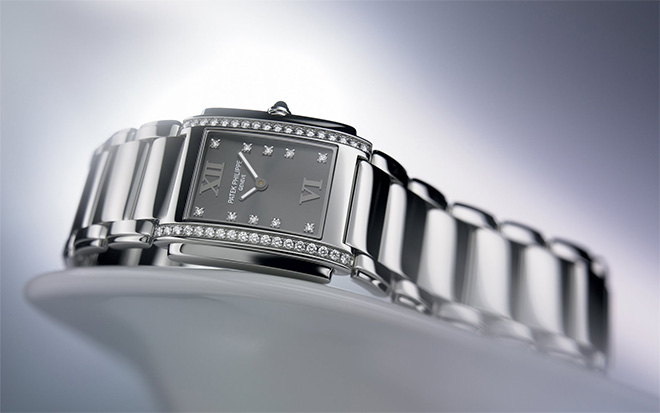 In 1999, the Patek Philippe Twenty-4 was already undeniably contemporary. Beginning as a stainless steel model, but steadily becoming available in 18k rose and white gold.  Apart from 10 solitaire diamond hour indexes, the rectangular 25mm x 30mm ref. 4910/10A women’s Twenty-4 was actually quite understated, apart from the characteristic white gold applied Roman numerals at 12 and 6 and the iconic integrated link bracelet which sets Patek Philippe’s famed rectangle women’s watch apart from every other rectangle ladies’ timepiece in the industry.

Eventually, the Patek Philippe Twenty-4 incorporated a highly feminine sateen strap with the ref. 4920R but it was always driven by the high precision E15 quartz calibre ensconced within a case that was water resistant to 100 metres, at the time, unheard of in a women’s watch.

Prized for its sophisticated silhouette, and peerless timekeeping, the Patek Philippe Twenty-4 with its signature finishing became a “must have” accessory at the turn of the century. Today, the automatic Twenty-4 completes the journey of a maison and serves as a historical allegory to the growing recognition of women of achievement.

You can check out the complete Twenty-4 collection at Cortina, an authorised Patek Philippe retailer. 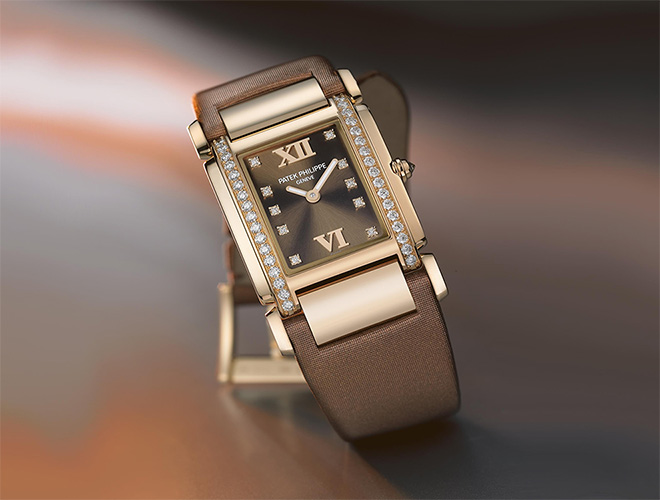