Serious watchmaking happens at La Fabrique Du Temp, one needs only have to look at the mysterious Spin Time and World Time complications 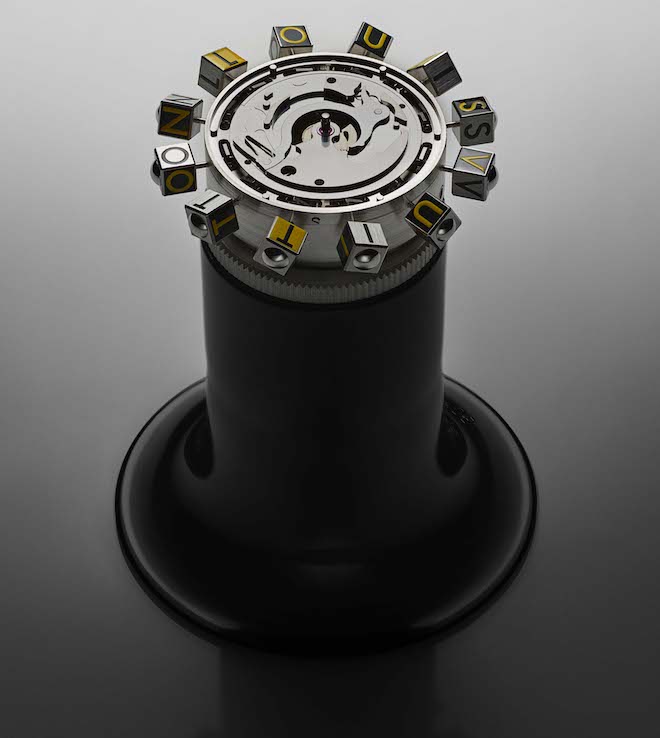 The watchmakers of La Fabrique du Temps Louis Vuitton in Geneva use their mastery of traditional craftsmanship and modern technology to reinvent the watchmaking of tomorrow.

In 2010, watchmakers Michel Navas and Enrico Barbasini at La Fabrique du Temps patented a time-telling system based on spinning cubes. Displaying time indication in new and interesting ways beyond the hand pointer system in use since the late 14th century, where a fixed hand (literally sculpted like a hand) indicated the hour by pointing to numbers on a rotating dial; from then on, the convention of a rotating pointer on a fixed dial was adopted and has pretty much been in use for the last 600 years. That is until a handful of pioneers of which Louis Vuitton’s La Fabrique Du Temp can claim to be a member of, started on a novel, distinctive style of time display.

La Fabrique Du Temp Louis Vuitton is a literal factory creating new perspectives of time, with its signature spin time display system. It was designed to be spun, depending on how it was geared, to spin its cubes and indicate time hourly, half-hourly, and even half-minute intervals if the watchmaker so desired. It would then be up to the fertile minds at La Fabrique Du Temp  to conceive of different functionality using those cubes. 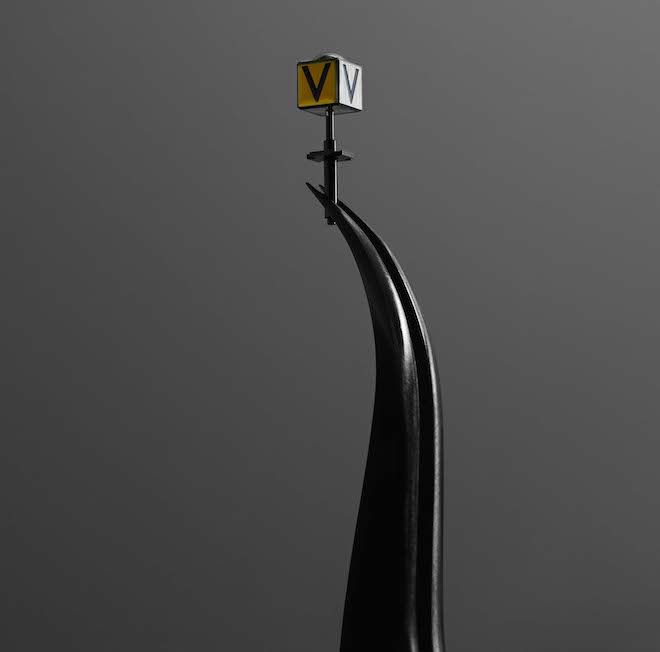 According to Dr Nick Lomb, consultant curator of astronomy at the Sydney Observatory, our 24-hour day comes from the ancient Egyptians. He says, “It was they who divided day-time into 10 hours and they added a twilight hour at the beginning and another one at the end of the day-time.” Indeed, the 24-hour or military clock, where time is indicated by the hours passed since midnight, from 0 to 23,  is the most commonly used time notation in the world today as it prevents any ambiguity, especially in medical and scientific contexts where precision timing is necessary. In case there’s any curiousity, time notation in East Asia, followed the 24-hour format as well before the popular western concept of two, 12 hour halves denoting AM and PM became common place in every day civilian usage. Suffice it say, for those unaccustomed to 24 hour GMT or military nomenclature, it often requires a period of adjustment, something which the innovators at La Fabrique Du Temp Louis Vuitton ingeniously side-step: the positioning of the spinning cubes makes the current hour obvious even in a 12 hour mindset. 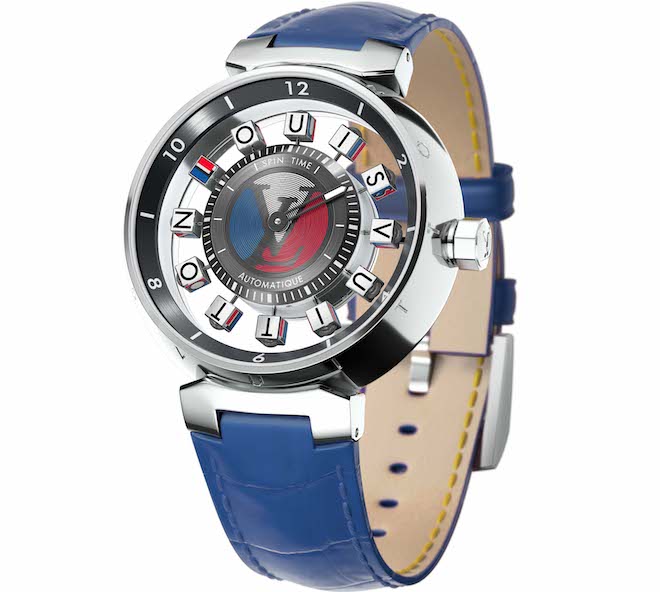 Aficionados of international travel culture will remember 1884 as the year that American lawyer and astronomer Lewis M. Rutherfurd proposed the 24 hour system but it would take at least another 10 years since that International Meridian Conference before the United Kingdom and Italy would be among the first European nations to adopt the 24-hour time nationally. As testament to burgeoning international travel, other countries would soon follow suit: France adopted it in 1912, followed by Denmark (1916), and Greece (1917). By 1920, Spain, Portugal, Belgium, and Switzerland had switched, as did the Latin American countries, followed soon after by Turkey (1925), and Germany (1927). If necessity is the mother of invention, let’s just say that quite unfortunately, global warfare is the catalyst for adoption; with trans-national conflicts being what they are, it became necessary to synchronise timing for military manoeuvres quickly encouraging the adoption of the 24 hour system among the participants.

If mechanical timekeeping feels like an anachronism in an age of WIFI connected Apple Watches, timepieces like the Louis Vuitton Escale Spin Time Tourbillon Central Blue convey a unique interpretation of a 24hr format and using the cubes in an almost steampunk fashion like an Urwerk or Zeitwerk. 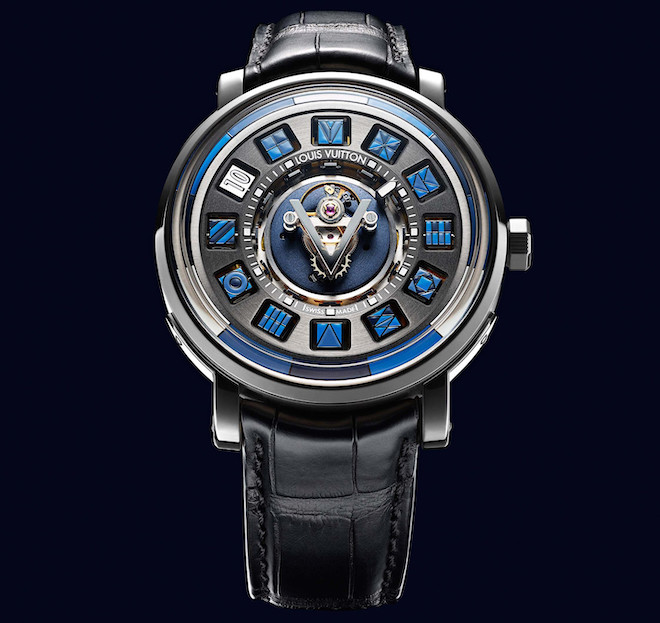 I recall just three years ago, being wowed by what I considered to be the pinnacle of Louis Vuitton watchmaking at the time. The innovating system of 12 rotating cubes powered by a movement developed and assembled in0house framing a flying tourbillon right at the heart of the calibre. The combination of central flying tourbillon and spin time turned a technical masterpiece into one full of the aesthetic flourish we’ve come to associate with Louis Vuitton.

Taking inspiration from Gaton Vuitton’s V motif decorated across the brand’s famed Steamer Bag, the central tourbillon carriage marks the timepiece as a unique Louis Vuitton creation; however, it is the magic of the twelve blue cubes rotating on its axis which signifies La Fabrique Du Temps’ arrival on the stage of a fine Swiss watchmaker thanks to the 24 square geometric flags pad-printed by hand on each of the 12 cubes. 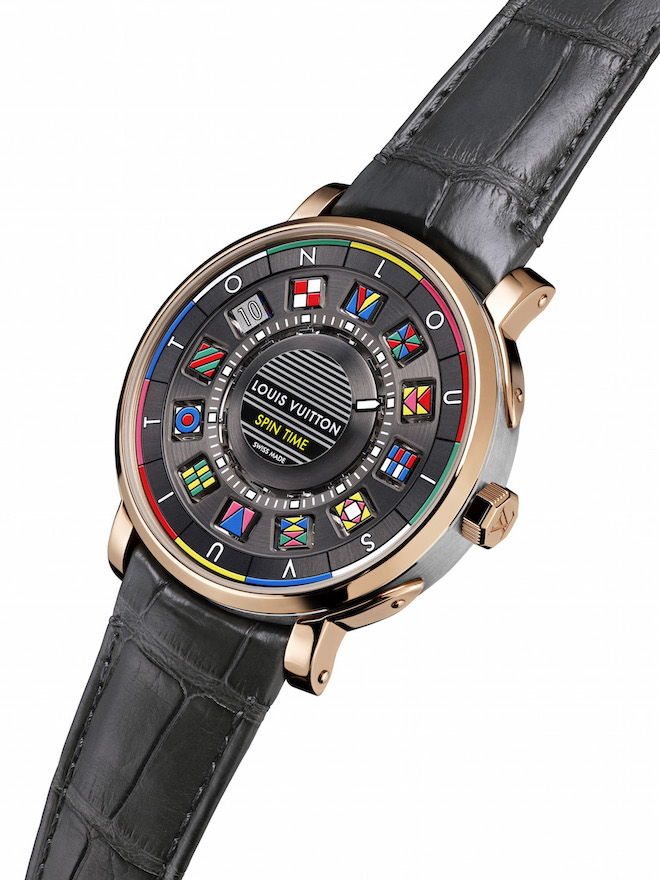 Across the world, the Louis Vuitton name is synonymous with high art and so, I would be remiss if I didn’t at least mention that the technique for transferring ink from an etched plate using a silicone rubber stamp is extremely challenging to produce on the minute surface area of the sides of these cubes. The process is carried out one colour at the time and one surface at a time. It is art and technique that truly marks Louis Vuitton’s “time factory” as a legitimate contender on the level of heritage manufactures.

Reminiscent of Louis Vuitton travel trunks, the mid case of the Escale Spin Time Tourbillon replicates the iconic elements of the trunks and uses them as lugs, a constant reminder of the brand’s original remit for global travel, much like the World Time indicator. 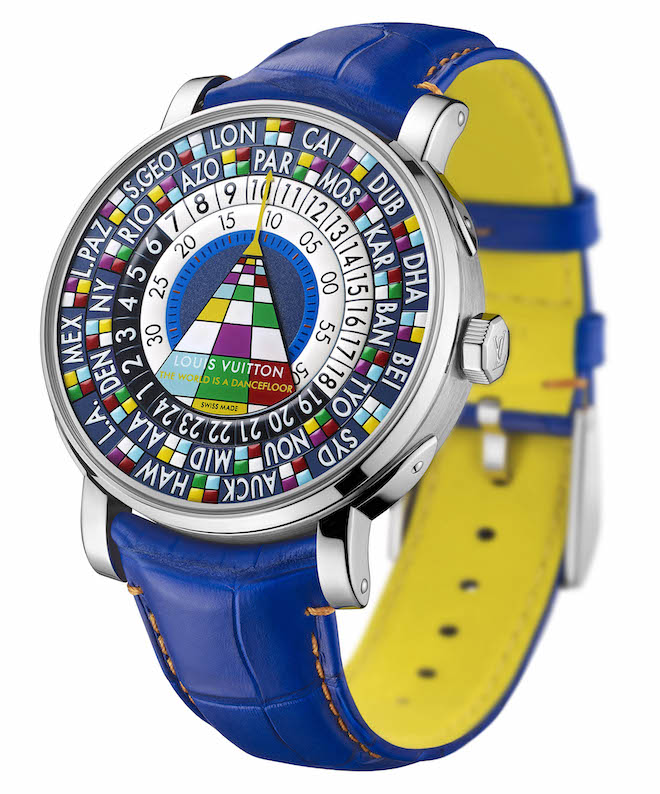 In 2014, Louis Vuitton presented a highly original Escale Worldtimer with hand-painted indications on two rotating discs – hence no hands – that showed time in any of 24 time zones simply by glancing at the initials of the corresponding city.

Louis Vuitton World Time is yet another watchmaking innovation by Louis Vuitton’s La Fabrique du Temps. Drawing upon from the history of the House to breathe new life into the art of Haute Horlogerie. By aligning the initials of the desired city above the yellow arrow, you can instantly see the time anywhere in the world while the minutes can be read underneath the yellow arrow indicating the hour in the reference city. A predecessor of the Louis Vuitton Escale Time Zone 39, the distinctive colourful “flags” reference cities on the world time disc like those that would be emblazoned on luggage signifying one’s arrival to the port of destination, requiring 50 hours to paint. 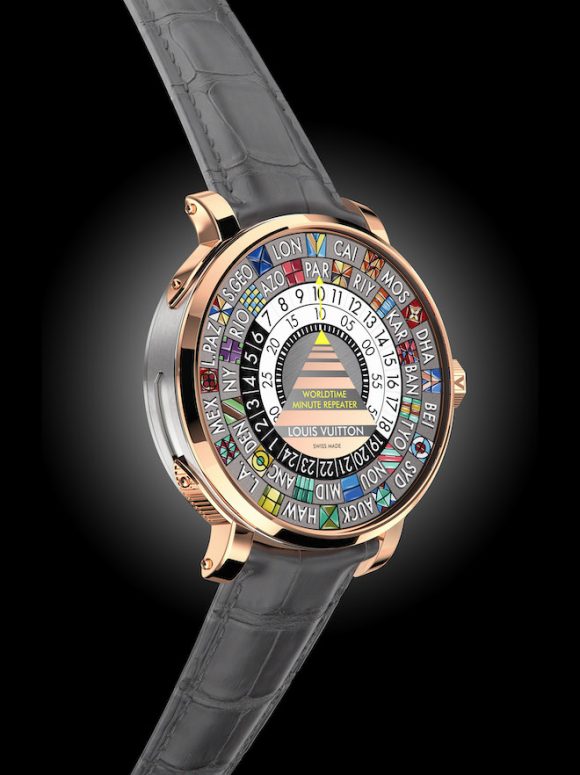 In 2015, Louis Vuitton set the bar higher still and added a minute repeater to this new Escale Worldtime, which sounds time back home no matter where in the world the owner of the watch may be. 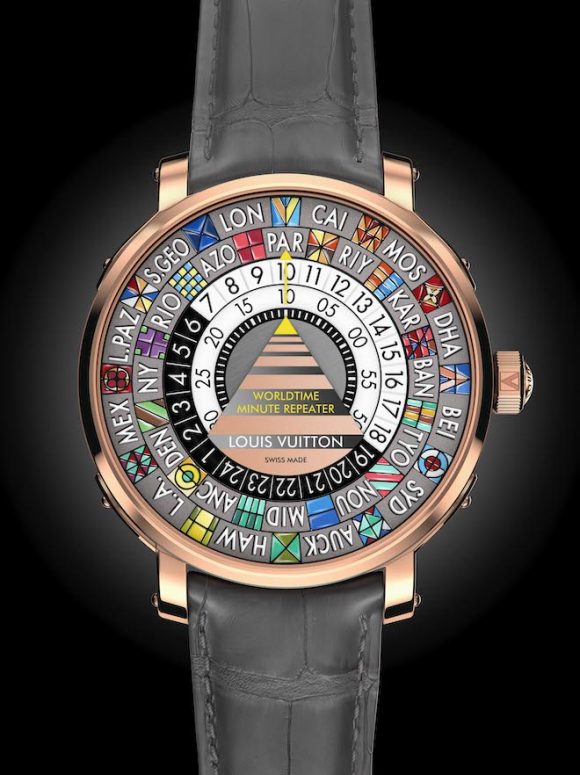 Home time is set on the Louis Vuitton Escale Worldtime Minute Repeater by aligning the letter V, engraved on the octagonal crown, with the corresponding spot on the dial. The time zone is then adjusted by pushing a button in the crown.

However, the subsequent Escale Time-Zone does not use a hand-painted dial like the World Time instead opting for a lacquer transfer-made in-house featuring crisp printing with prominent insignia. While the Escale Time-Zone takes some getting used to, it is a definite plus that the timepiece functions like other world-timers, it looks nothing like your typical multi-time zone dial with a representation of the globe, instead, you get a city ring which rotates when you adjust the “base” timezone, which in this case, happens to be Paris. That means that the 24 hour ring and hands will show the same time.

Audacious and bold, the watches like the Louis Vuitton Escale Spin Time and Time-Zone are emblematic of the brand’s roots in the art of travel; today, a jet-set lifestyle of the globalised clientele get to use time-keeping instruments in the grand style they’ve grown accustomed; just like their forebears during the age of steamer trunks.