How a Legendary Rolex Chronograph Came to be Named Daytona

Before lending its name to one of Rolex’s emblematic chronograph, the city of Daytona Beach was already legendary as the home of speed records 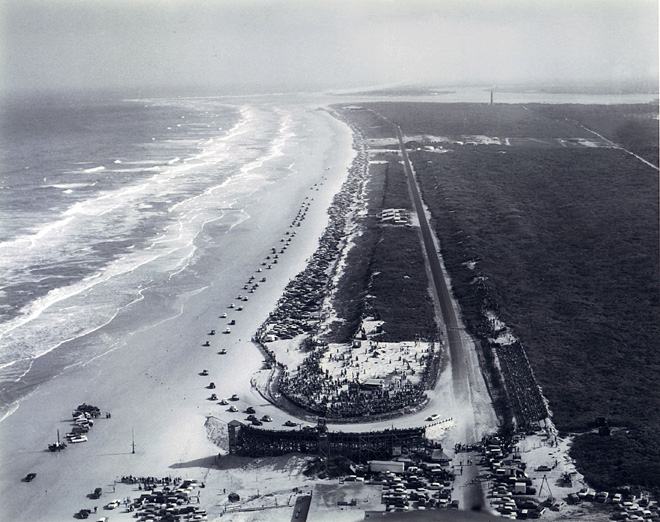 1955: The field of Modified-Sportsman cars on Daytona Beach. Banjo Matthews won out of 68 finishers. (Photo by ISC Archives via Getty Images)

Soon after the invention of the automobile, early car owners were searching for places where they could drive. Existing roads were no more than horse trails  and mankind’s newest mode of transportation required solid surfaces. In 1902, J.F. Hathaway, a retired businessman, distributed photographs of Ormond and Daytona Beach, sending them to leading automobile journals and newspapers along with a story extolling the hard-packed sand. Though fate would have it that Ormond would be the venue for the first timed trials in March 1903. It was agreed that the sands of Ormond and Daytona made them the perfect place for racing.

At that very moment, the city of Daytona Beach already famous for its long, straight beach, became even wider recognised for its hard, cement-like packed sand, and it began forging its own legend as the capital of land speed records where no fewer than 80 have been set, 14 of them for the “fastest speed in the world”. In 1910, Barney Oldfield became the King of Speed after reaching 210 kmh in his Lightning Benz, at the time, it was considered the fastest land speed that humanity would ever travel. 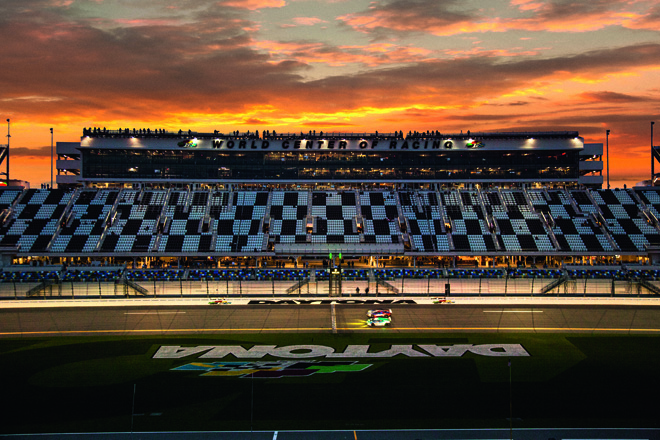 How a Legendary Rolex Chronograph Came to be Named Daytona

Indeed, Daytona’s growing fame in speed records would continue to grow exponentially when two English knights, Sir Malcom Campbell and Henry Segrave, the two most formidable speed rivals of the era, began to race each other at Daytona in vehicles exceeding 200 mph, a speed only matched by airplanes at the time. 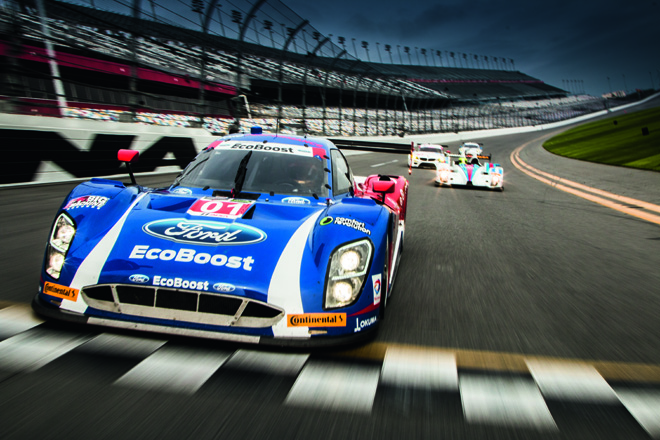 Campbell’s most notable feats were accomplished while wearing a Rolex Oyster. Attesting to its exceptional resistance to shocks and vibrations, Campbell’s testimonies became among the first in motor sport which laid the fundamental association tying Rolex to Daytona. While it was inevitable that ever increasing speeds and ever evolving engines would eventually favour the salt flats of Utah, Daytona continued to maintain its reputation as the place for automotive racing. Soon, it would become known for its race track with a uniquely scenic vista – a traditional oval track, half oon the beach and another half on a narrow road parallel to the ocean; the races began to include those of the two-wheel variety, under the name Daytona 200. It’s from this tradition that NASCAR (National Association for Stock Car Racing) finds its roots in 1948 and individuals and brands from all walks and makes would participate in epic motorcycle and car races on the famed Daytona Beach-Road course but by the mid 1950s, deterioration of the sand would threaten Daytona’s legacy and so, the President and Founder of NASCAR, William France conceptualised and launched a permanent hard-surface race track in 1959, it was then that the Daytona International Speedway was born. 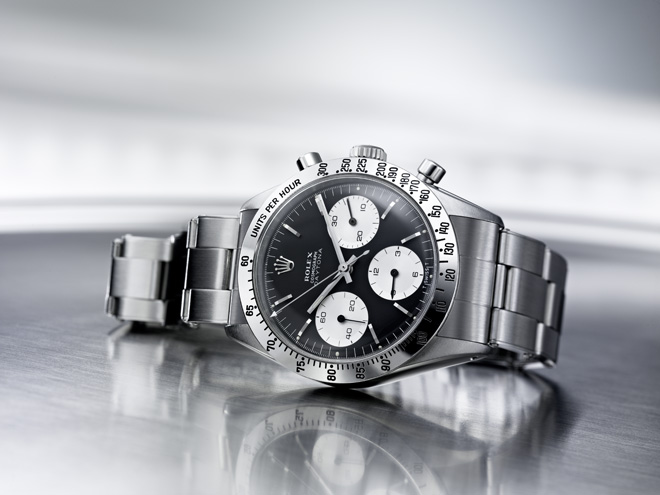 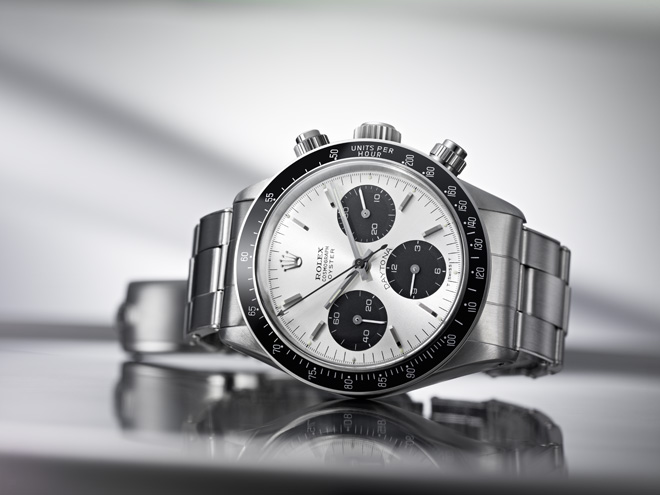 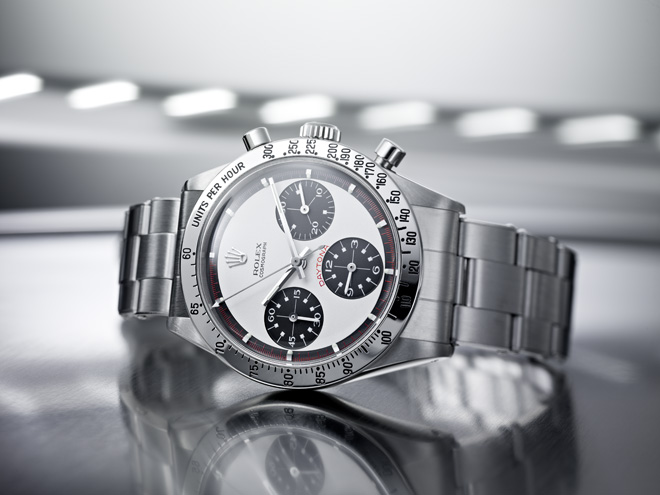 The tri-oval, 4 kilometre race circuit is one of the first Super Speedways in the world. As a result of its unusual design with 31-degree banking in the turns and more than 10 metres elevation at its tallest point, the high banking allows cars to approach turns at great speed without skidding off the track due to centrifugal force, offering an epic spectacle for spectators regardless of seating position in the grandstands.

Willam France Sr.’s innovative approach of banked turns and an infield of the giant speedway to host sports car and motorcycle races continued to build upon Daytona Speedway’s credibility and legitimacy, leading to the race that would become the Rolex 24 at Daytona, one of the most prestigious endurance races in the world. The first edition of the race not only gave the famed American racetrack international acclaim but also contributed to the eventual naming nomenclature of the Rolex’s first Cosmograph Daytona – a destiny of race and watch which would become forever intertwined. 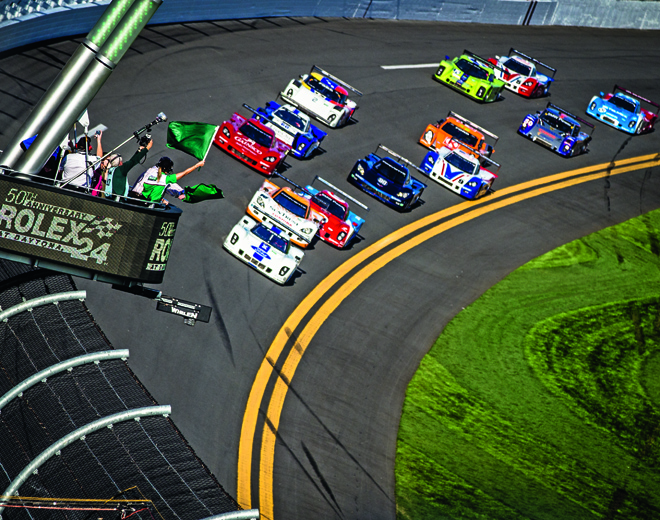 Birth of the Rolex Cosmograph Chronograph aka “Daytona”

In 1963, Rolex launched a new-generation chronograph, the Cosmograph, dedicated to racing drivers. While chronographs were not uncommon, the unique name invented by Rolex and its strong contrast chronograph subdials immediately marked it out as a very different beast. The tachymetric scale – that allows average speeds over a given distance to be measured using the chronograph seconds hand – was moved from the dial to the bezel. In the ensuing decades, the sheer sexual allure of the Cosmograph Daytona continued to grow, encompassing new dials and expanding in range, some associations would become so strong that the hyper masculine timepiece would become known by its equally masculine celebrity owner – American movie star and race driver, Paul Newman; breeding a series of chronographs forever known as “Paul Newman Daytonas” thanks to model with that particular dial he was often pictured with.

From the 1960s, Rolex was the Official Timepiece of the Daytona Continental where winners received a Rolex in addition to the trophy, when the Cosmograph was launched, the manufacture named the model after the American racetrack to deepen the shared history and relationship.

Evolution of the Cosmograph Daytona

The Rolex 24 At Daytona® is the longest and most prestigious race in the United States, marking the opening of international motor sport season but enthusiasts simply refer to it as “The Rolex” – elite motoring athletes cover a demanding distance of 4,300 kilometres, equivalent to driving across the United States between New York and Los Angeles, a feat which tests the ultimate limits of man and machine in a twice round-the-clock format which no other race in the world equals save for the renowned 24 Hours of Le Mans.

Ultimately, from track to watch and even the racer, each of these legends stand as historic  testimonials to the long standing ties that Rolex has fostered in the high octane world of motorsports, and while any driver can buy a Cosmograph Daytona but not everyone qualifies to win one. 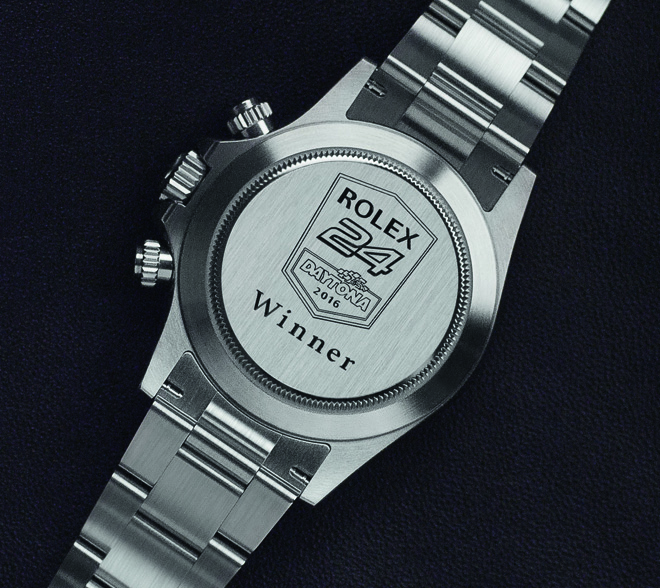