The Hermes Cape Cod watch was brought to life 25 years ago and, unlike most timepieces, makes a virtue of its youth. 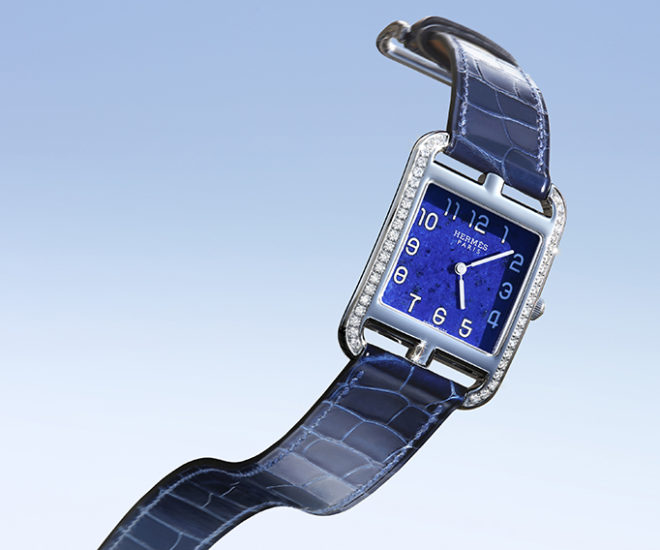 The Hermes Cape Cod watch was brought to life 25 years ago and, unlike most timepieces, makes a virtue of its youth. The designer, Henri d’Origny, envisioned a timepiece that played with shapes, placing a square within a rectangle – an aesthetic that puts on in mind of the house’s Chaîne d’ancre link. Watch collectors will be tickled to learn that d’Origny was Hermes’ silk maestro, which probably speaks to the Cape Cod’s peculiar appeal; this is a watch that wants to be worn, not tucked away in a strongbox.

In 1998, Martin Margiela (yes, that Margiela) elevated the design by adding a double-wrap strap, giving the watch an element of style for both men and women. The strap, iconic in its own right, would later be an Hermes signature called Double Tour. One may interpret this era as the adolescent phase of the watch’s life.

Now in 2016, the Hermes Cape Cod is exploring new territory with brand-new models for its 25th anniversary. First, a new mother-of-pearl dial that complements the latest gemsetting technique. Third, reimagining the men’s model in a cuff-style wristband. Fourth, a new white dial with a calfskin or goat skin strap, its colors contrasting with the leather texture for your aesthetic pleasure. And fifth, onyx and lapis lazuli dials, a nod to the Art Deco and Bauhaus movements of the past that shaped our present-day sensibilities.