Hamilton aims to merge nostalgia for its American roots with the latest Swiss technology in the new Time Player watch. Described as “latitude and longitude with attitude”, this hi-tech model is inspired by the geographic co-ordinates system based on lines of latitude and longitude. The concept unites finger-operated timekeeping in four up-to-the-minute time zones with […] 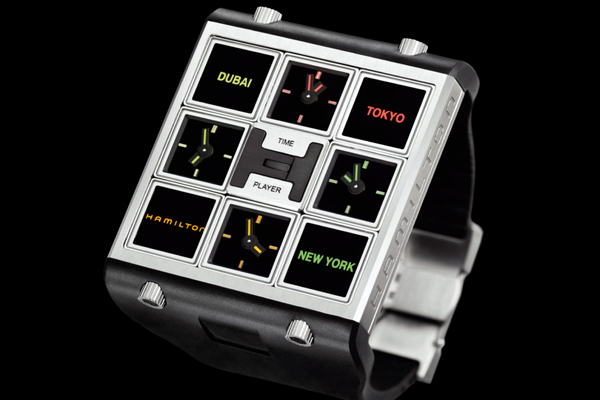 Hamilton aims to merge nostalgia for its American roots with the latest Swiss technology in the new Time Player watch.

The concept unites finger-operated timekeeping in four up-to-the-minute time zones with zany design belonging to the future, the company said.

Hamilton took inspiration from a design the company originally created for a clock in the Stanley Kubrick movie, ‘2001: Space Odyssey’

A totally flat 48mm by 42mm titanium case is split into nine squares, eight filled with movable counters and one left empty like a sliding puzzle.

These counters, separated by lines symbolising those of latitude and longitude, enable the wearer to set and measure time in the current location, plus three others.

A Hamilton logo marks the here and now, while the additional three places are identified by colour-coded printed names of the dynamic cities of Dubai, New York and Tokyo.

The remaining four counters are all individual watch dials, in colours to match the corresponding location, so that they can dedicate their energy to tracking the passage of time in the defined destination.

To set the time in a desired time zone, the wearer simply moves the corresponding miniature watch to the central square and adjusts via a crown. Once this is done, all of the counters can be moved around again at will.

Two easy-to-grip crowns are positioned on each of the two sides of the case where the attachment joins.

The thick black rubber strap also picks up the theme of right angles with corresponding indents.

Launching in June 2010, the watches are limited edition and exclusively available on www.hamilton-lab.com. Price: â‚¬2,000.