This is not your regular Casio G-SHOCK. It’s plated in 18-karat yellow gold and comes with a $70,000 price tag 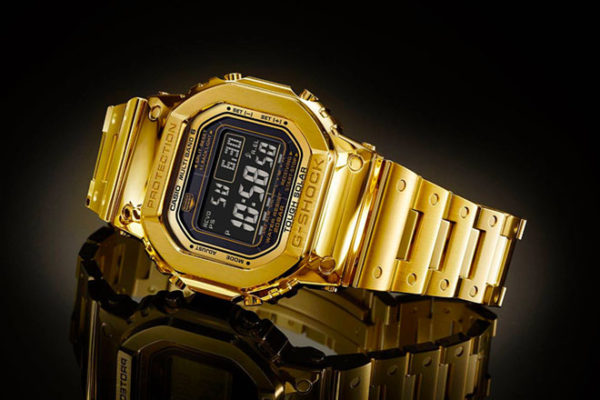 This is not your ordinary Casio watch. This is the G-D5000-9JR, an 18-karat yellow gold piece was revealed by Casio to celebrate their 35th anniversary of the iconic digital watch. The Japanese brand introduced the most expensive watch to date and only 35 pieces will be made available.

The G-D5000-9JR will be featuring its impact- resistant square case, brand and screws all made entirely of 18K yellow gold with a black LCD case – outrageously luxurious. As with all G-SHOCK, the G-D5000-9JR adopts the original G-SHOCK square case and is packed with Casio technology and function. This timepiece includes a split-second time correction owning to radio waves from six stations across the globe. This ultimate edition of G-SHOCK is powered via Casio’s trademarked Tough Solar charging system and boasts the same shock-resistant double-case construction.

It is no surprise that many would see G-SHOCK as a reasonably-priced watch option, typically retailing over a few hundred dollars or less. The concept model was presented at BASELWORLD, the world’s largest watch and jewellery fair held in Basel, Switzerland in 2015. Though many requested sales, Casio did not carry out the product evaluation as it was only a concept model. It was only made possible to sell once Casio developed for commercialization as “Dream Project” and cleared product evaluations and made it possible to sell. The 18K G-D5000-9JR is a rare release by Casio and is set to retail for approximately $69,500 (7.7m yen), excluding taxes.

Those interested can make reservations for the watch can be made at selected G-shock boutiques in Japan starting May 15, 2019, which the watch will later be shipped in December.