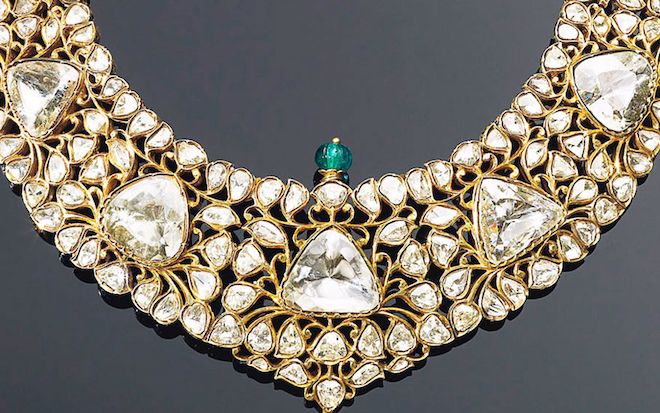 In an auction spanning 12 hours presided by five auctioneers, Christie’s Maharajas & Mughal Jewellery Sale set auction records with a total haul of US$109,271,875 in New York. It was the highest for a niche genre of Indian art and Mughal objects, but tellingly so, it was the second highest for a private high jewellery collection.

By all accounts, Christie’s had gathered an unparalleled collection of Mughal jewels, European-Indian hybrid designs and 20th-Century creations by leading Jewellery houses. The high jewellery auction spanned over 500 years of history and sovereign power on the subcontinent, tremendous provenance for the close to 400 lots offered on 19 June. 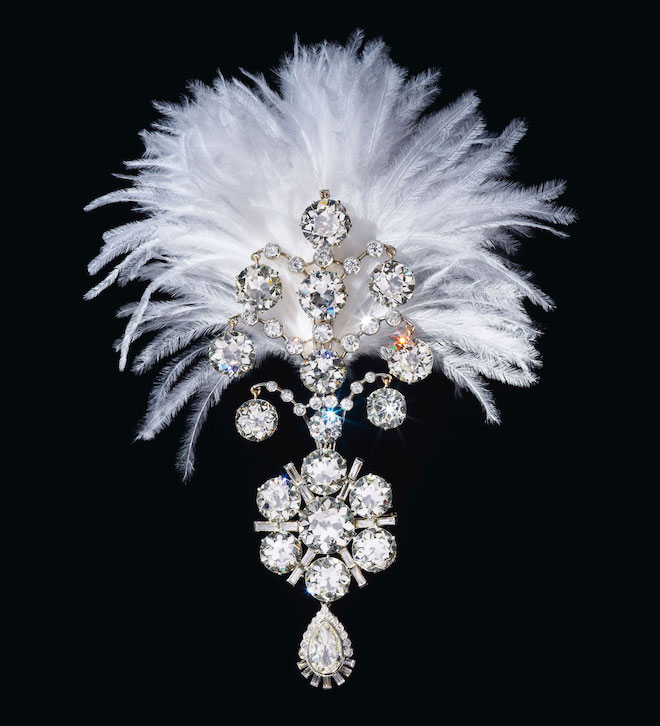 ‘Momentum has been building from the international tour to the New York exhibition culminating with the excitement witnessed in the saleroom.’ – Rahul Kadakia, International Head of Jewellery at Christie’s

Ranging from legendary Golconda diamonds to dazzling coloured stones, jewelled objects used in the royal courts to swords and daggers once owned by Indian rulers, attracting thousands of bidders from 45 countries, and a significant number of institutions; when the first lots began breezing past their high estimates: an antique diamond Rivière necklace made $2,145,000; an antique emerald bead and pearl necklace sold for $855,000; a diamond and emerald bead brooch by Bhagat achieved $399,000; a five-strand natural pearl and diamond necklace, also by Bhagat, fetched $1,695,000; a carved emerald with two interchangeable emerald and diamond mountings by Cartier realised $735,000; and a natural pearl and diamond necklace was acquired for $1,095,000, it became evident, the luxury world was witnessing a phenom that was already largely self-evident in the financial reporting of the world’s largest luxury conglomerates – boom or bust economies regardless, jewellery brands command the best revenues and margins; and so, it stands to reason that more brands are going to enter this lucrative segment. 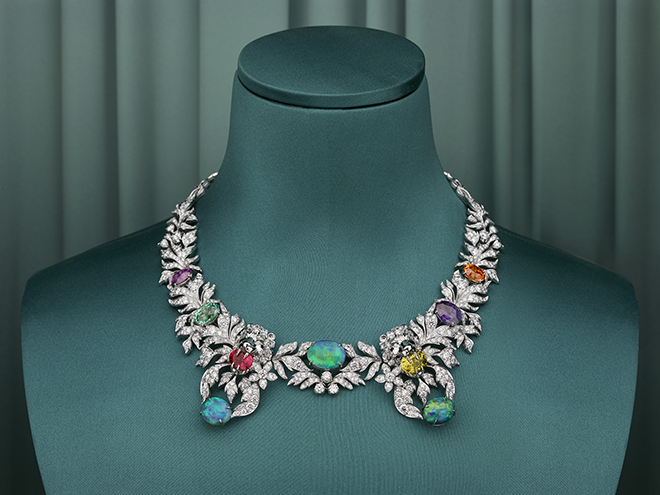 Half a world away, Place Vendôme, a name synonymous for high jewellery and artisan handicrafts welcomes a familiar luxury brand to its gilt edged streets, but one typically not associated with the realm of precious stones and high jewellery – Gucci.

Gucci has taken the world by storm with Alessandro Michele’s vision of fashion and leather goods and now the Creative Director’s midas touch is being literally leveraged into a segment of gold and precious stones. As a brand, Gucci is not altogether new in high jewellery but their works have been limited to private sales over the last two years. On 2 July 2019, Gucci’s presence in Place Vendôme became an obvious signal that the Kering Group’s darling is making a bet on high jewellery. 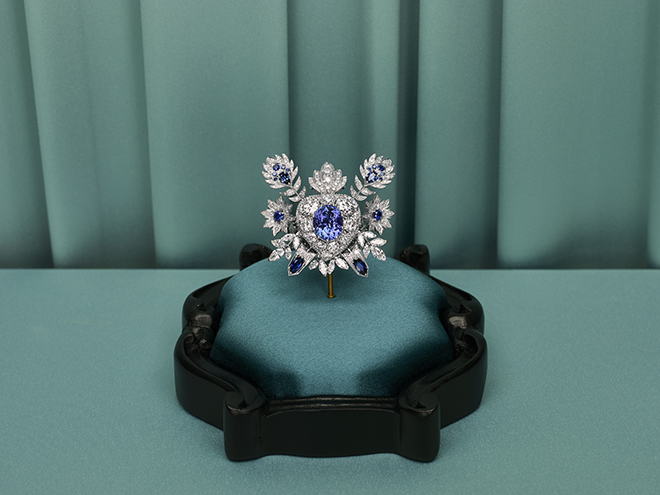 Meanwhile, adjacent Place Vendôme at 244 Rue de Rivoli, Dolce & Gabbana has been steadily increasing their investment into both high jewellery and now, watchmaking segments. Under the auspices of Alta Gioielleria and Alta Orologeria, haute joallerie and haute horlogerie segments, expressed with the gleeful exuberance and opulence that is emblematic of Dolce & Gabbana, also showcases the brand’s tentative if substantial steps in high jewellery.  Dolce & Gabbana might not be present on the perimeter of the iconic Place Vendôme square yet but expressing rarity, craftsmanship and lofty decorative expression, Dolce & Gabbana, like Gucci has been making significant investments into a venture that comes with equally high rewards.

“Each [piece] represents our small universe of creativity in which the invention of forms is accompanied by the rediscovery of time-honored and rigorously Italian artisanal techniques,” – Domenico Dolce and Stefano Gabbana on their Alta Gioielleria collections 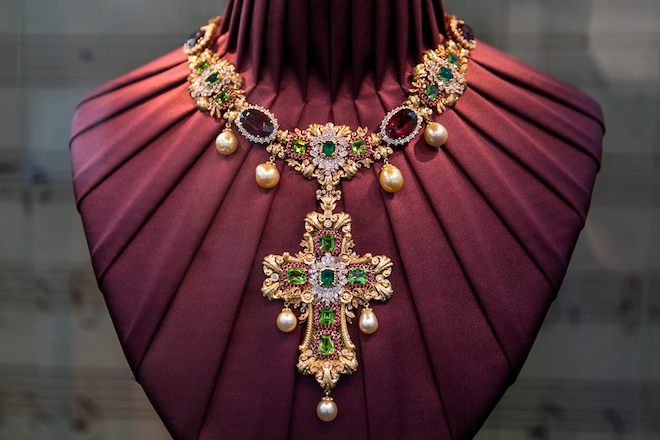 Alta Gioielleria or haute joallerie, here, the crucifix is expressed with the gleeful exuberance and opulence that is emblematic of Dolce & Gabbana, also showcases the brand’s tentative if substantial steps in high jewellery. 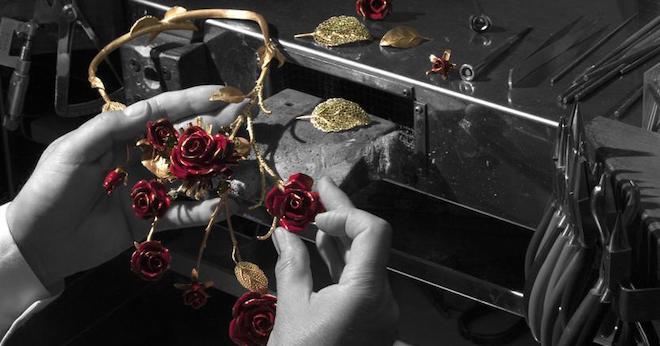 “Each [piece] represents our small universe of creativity in which the invention of forms is accompanied by the rediscovery of time-honored and rigorously Italian artisanal techniques,” – Domenico Dolce and Stefano Gabbana on their Alta Gioielleria collections

Does it Make Sense that Couture Brands are investing in High Jewellery?

According to Deloitte’s annual Global Powers of Luxury Goods report, the world’s top 100 luxury brands generated $247 billion in FY2017, $30 billion or 10.8% more than the previous year. In terms of consolidated sales, the world’s top 10 luxury conglomerates accounted for 48.2% of total luxury goods sales, led chiefly by its jewellery brands. In fact, Hong Kong’s Chow Tai Fook Jewellery Group, the only Asian company to be featured in the top 10, accrued $7.6 billion in sales and growth of 15.4%, rebounding from last year’s 9.4% decline, testament to the enduring, “against economic headwinds” growth nature of the jewellery segment.

According to Business of Fashion: A Bain & Company study showed that Jewellery, along with shoes, is the fastest-growing category in the luxury goods market, so it’s no surprise the demand for collectable gems remains robust. A decade of near-zero interest rates, infinite liquidity and central banks pushing high-return investments on premium goods meant that the secondary market is ripe for milestone sales in both art and jewellery, and Christie’s — along with competing auction houses — is capitalising on the momentum. 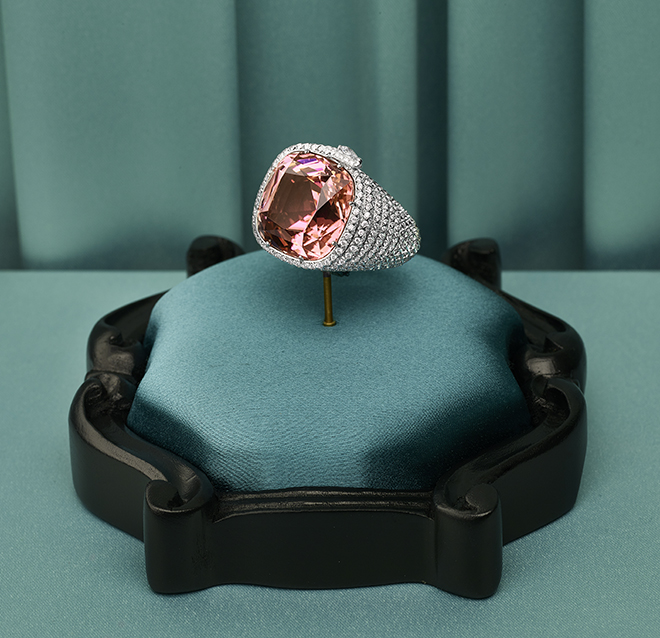 The most “attainable” of the Gucci Hortus Deliciarum collection, a small gem encrusted ring, setting you back at least US$60,000.

The new Gucci boutique on Place Vendôme is home to Hortus Deliciarum, a collection of over 200 high profile high jewellery pieces is complemented by Gucci’s more attainable fine jewellery editions. According to Gucci CEO Marco Bizzarri, the brands foray into jewellery was the result of Alessandro’s vision and direction in costume and fine jewellery. Hence, after four years at the creative helm, the brand felt ready to progress into high jewellery, making its debut in the retail heart of precious metals and stones no less.

Gucci’s Hortus Deliciarum high jewellery collection follows the traditions governing heritage brands like Van Cleef & Arpels, Boucheron and Cartier, hand-made small, often one-of-a-kind pieces, in workshops in Valenza (where historical jewellers based their artisans) with the most “attainable” of the artisanal works, a small gem encrusted ring, setting you back at least US$60,000. 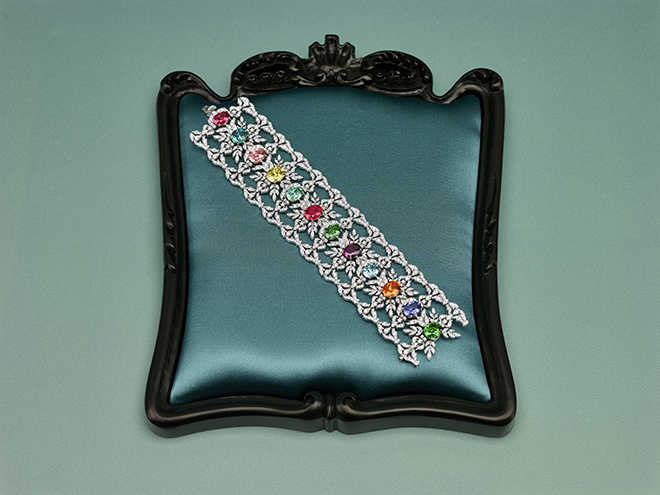 Gucci creative director Michele personally sourced unique stones and designed the brand’s first-ever High Jewelry collection echoing the eclectic quixotism of his vision and drawing on motifs that are dear to him – design elements echo Christie’s Maharajas & Mughal Jewellery thanks to the evident muse of Indian-inspired vintage jewellery and the other jewellery design trends of a bygone historical styles including Rococo, Baroque and Georgian, evoking the gem-drenched aesthetic on the animal menagerie of small rings to outlandish necklaces. 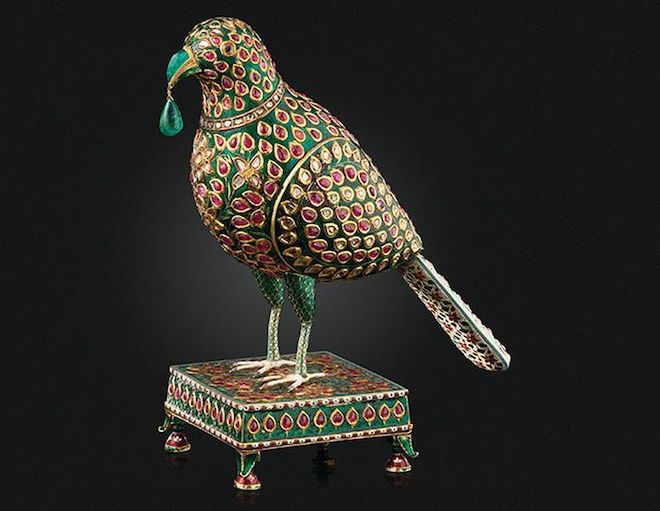 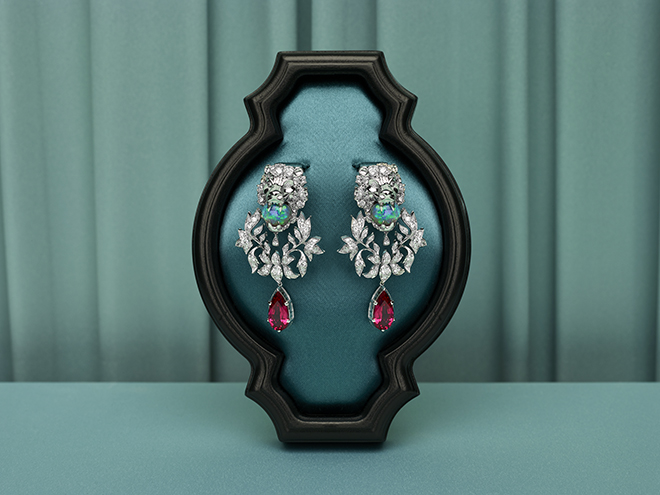 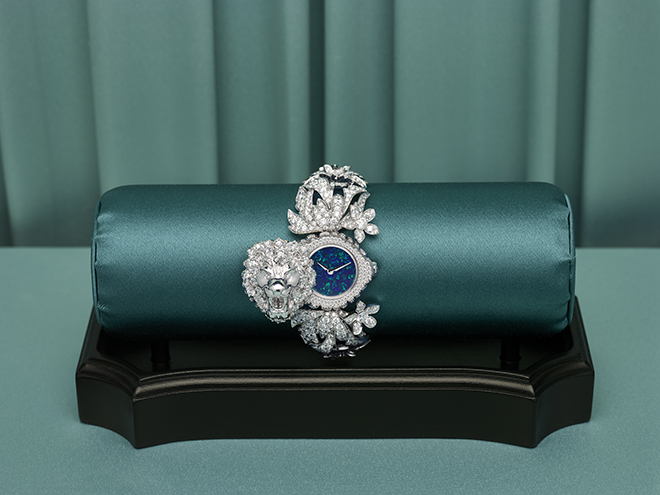 The symbolic strength of the Lion, the courage and passion of the Tiger, the wisdom and renewal of Ouroboros serpents, and the magical mysticism of Dionysus populate Gucci’s world of jewels and comprise the crest of this animal kingdom. Throughout the collection, lions clasp gemstones — most magnificently in the rainbow-hued Georgiana parure that sparkles with vivid green, hot-pink, blue and Paraiba tourmaline, bright yellow and violet sapphires, warm mandarin garnet, spinel and white diamonds. A swarm of colour-block
gemstone-headed bees offer magpie choice, and intricate tritons become lavender sapphire cuffs and pendants. Dionysus creatures twist into emerald cuffs and ruby rings and a magnificent 30,30 carat opal is hand-carved into a coiled serpent ring flecked with diamonds Each animal is also surrounded by nature as symbolic flowers, leaves and stars come to life in ornate diamond settings and hidden engravings. 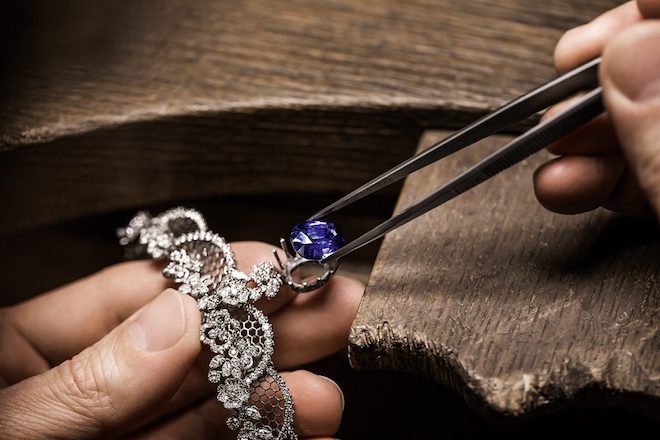 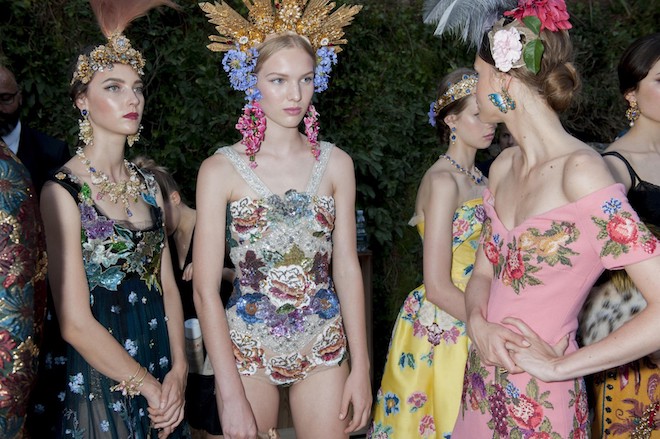 Dolce & Gabbana’s high jewellery venture began as accessories for the Alta Moda high fashion shows in 2014. Interest in the accoutrements grew to such an extent that the brand eventually made it part of their commercial offerings 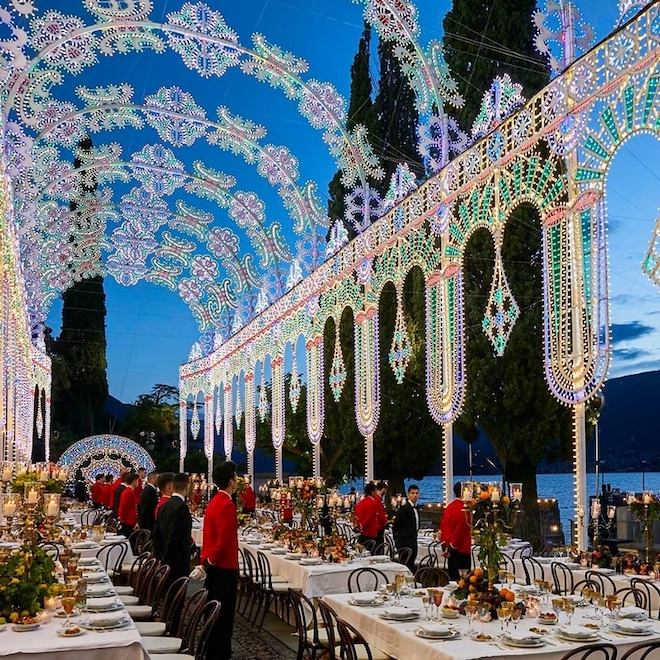 Dolce & Gabbana Alta Gioielleria private dinner. The Italian brand has a foot in high jewellery but it’s not a large aspect of the business.

Alta” roughly means “elevated” and in a sense, Gucci (2019), like Dolce & Gabbana (2012), Louis Vuitton (2001), Christian Dior (1999) before them, are among the handful of designer brands which have swum against the trend of cheaper diffusion lines, instead opting to “elevate” their offerings and double down on the ultra-high net worth segment, making exquisite bespoke pieces to rival legacy marques like Bulgari and Cartier in jewellery with their own unique DNA and provenance – haute couture. 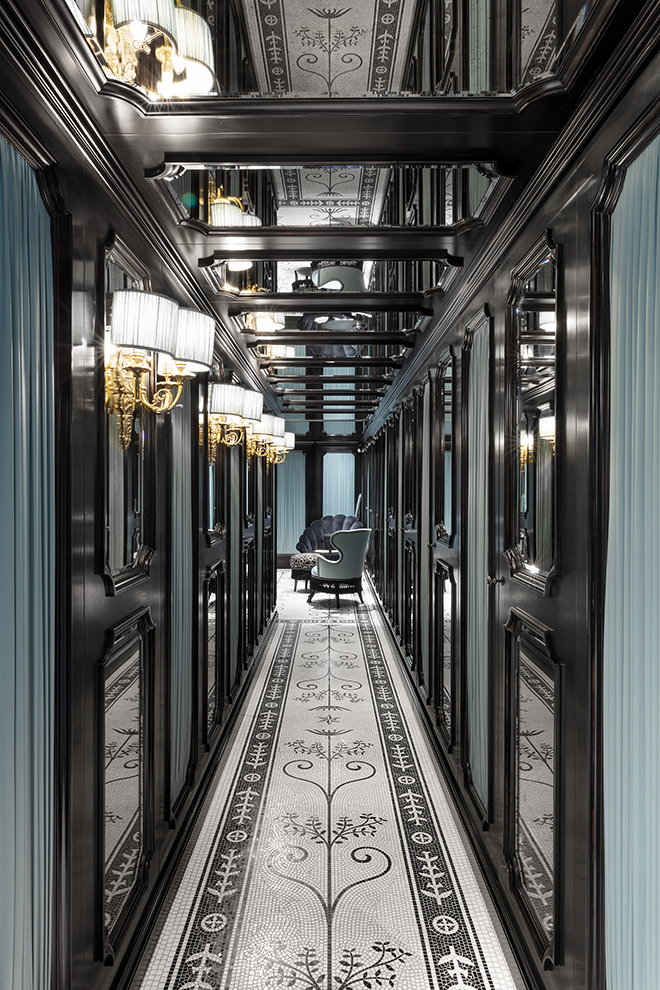 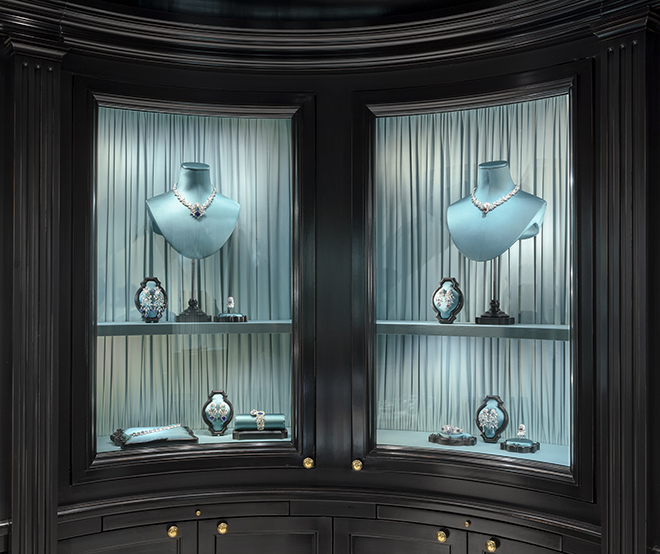 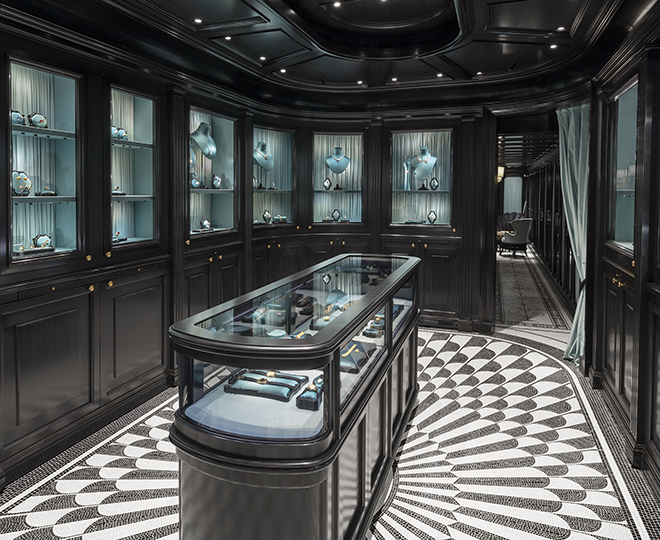 16 Place Vendôme stands in stark contrast to your typical Gucci boutique, elegantly muted eschewing its signature distinct saturated hues, signalling the arrival of Gucci in the world of High Jewellery. Cabinets crafted from ebonized wood are lined in verdeacqua satin and antique mirrors, echoed by brass details and a monochromatic mosaic floor in nero maquina and white thassos marble. It is designed to dramatically illuminate the colourful vibrancy of the jewellery itself. 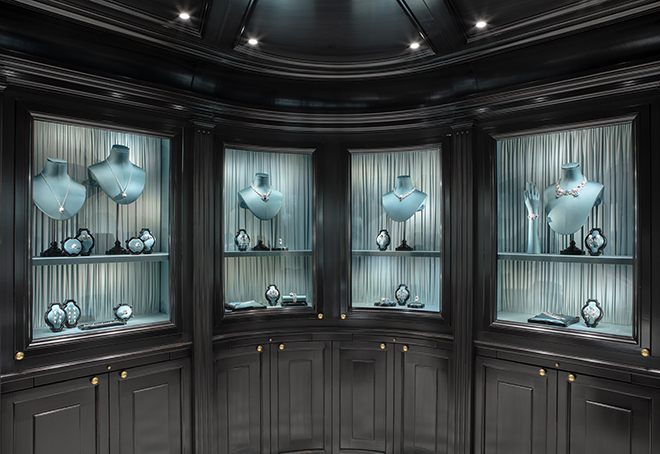