The fashion designer turned the record store Amoeba Music in Los Angeles into a gigantic nightclub for her eponymous label’s Fall presentation. 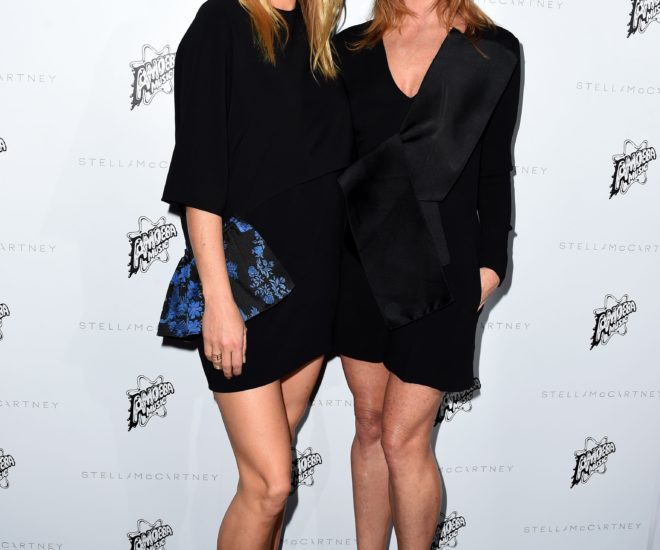 Fashion designer Stella McCartney turned the record store Amoeba Music in Los Angeles into a gigantic nightclub for her eponymous label’s Fall 2016 presentation January 12. Throughout the show, the sounds of David Bowie rang out in tribute to the late great and some of the biggest names in Tinseltown rubbed shoulders among aisles of CDs.

Actress Gwyneth Paltrow (causing fashion ripples with a pair of eye-catching blue bootsies) and pop star Katy Perry headlined the A-listers who turned out for the presentation of Stella McCartney’s Fall 2016 collection Tuesday in the heart of Hollywood.

Actresses Kate Hudson and Melanie Griffith, and British singer-songwriter Kelly Osbourne, were also in attendance, as was Kiernan Shipka, of Mad Men fame. And there was Ringo Starr, the former Beatle, too.

“We just want to have some fun, celebrate fashion and music,” said McCartney, 44.

“This collection is about what do we really need in our wardrobe, what do we wear for glamour, or for the daily routines of life, and how do we mix them,” the Briton told AFP.

Touching on her decision to choose Los Angeles for the occasion – a notable departure from New York or Paris – she added: “It’s an interesting part of the world because it has this laid-back culture, there’s this climate, but it has a lot of art.

“It was always about entertainment, but now fashion, music, art are playing a big role (here).”