Miuccia Prada has already won plaudits for her spring/summer 2011 collection — simply-cut dresses and suits in a quirky mix of stripes and solids, with bold splashes of orange, violet and electric blue. But by displaying the clothes on a runway in Beijing on Saturday evening, her first catwalk show outside Europe, and adding a […] 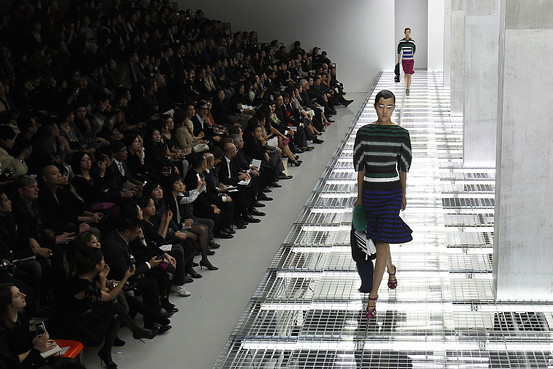 Miuccia Prada has already won plaudits for her spring/summer 2011 collection — simply-cut dresses and suits in a quirky mix of stripes and solids, with bold splashes of orange, violet and electric blue.

But by displaying the clothes on a runway in Beijing on Saturday evening, her first catwalk show outside Europe, and adding a few looks from her spring menswear line, the Italian designer signalled her focus on China’s huge market.

Actresses Gong Li and Maggie Cheung added a bit of high-wattage star power to the show at the Central Academy of Fine Arts museum — a surefire way to maximise local media coverage and get the Prada message to the masses.

China is the world’s fastest-growing market for luxury goods and is forecast to be the world’s top buyer of such products — cosmetics, handbags, watches, shoes and clothes — by 2015, according to consultancy PriceWaterhouseCoopers. Sales of luxury goods in mainland China totalled $10.3 billion in 2009, up 14 percent from the year before, according to Bain and Company. When purchases by Chinese citizens abroad are factored in, the market was worth $23.7 billion.

Like many Western fashion brands, Prada is already established in China, with at least 15 stores in operation and plans for nearly 30 more by the end of 2012. It has also announced it will open a design studio in Hong Kong in 2011.

But luxury goods analysts say foreign firms have only scratched the surface of the market’s vast potential, which is based on the country’s population of 1.3 billion and the mounting wealth of an ever-growing middle class.

“In China, we consider that luxury is still in a pure recruitment phase,” HSBC analyst Erwan Rambourg told AFP, explaining that 90 percent of Chinese buyers are newcomers to a brand, while the rest are repeat customers.

“It is still a very underpenetrated market.”

The Milan-based family-owned Prada, which is rumoured to be considering a market listing in Hong Kong, is of course not the first fashion powerhouse to stage a major event in China to lure more customers to the cash register.

Fendi used the Great Wall as a catwalk in 2007, Christian Dior used Shanghai as the backdrop for a show and an ad campaign starring French actress Marion Cotillard, and Phillip Lim staged a show at Beijing’s Forbidden City last year. “China has become a place where not only luxury brands do local brand-building events; China is now front and centre in luxury brands’ global marketing campaigns,” Bruno Lannes, a Shanghai-based partner at Bain, told AFP.

Chanel, Louis Vuitton and Gucci remain the most desired brands in China, according to Bain, in part due to their iconic logos — which convey status, a key driver for Chinese buyers — but experts say tastes are changing.

In Bain’s research study Prada, which first unveiled its spring/summer 2011 collection in Milan in September, is now the ninth most desired brand.

“Prada stands for good taste and individuality. That shows that Chinese consumers are becoming more sophisticated,” said Zhou Ting, a professor at the University of International Business and Economics of China.

Other more subtle labels such as Balenciaga and Balmain have recently set up shop at a new luxury mall in central Beijing. Lanvin, a brand synonymous with understated elegance, is soon to open its doors in the same complex.

HSBC’s Rambourg explained that while some foreign labels adapt their merchandise in China to be more logo-driven in response to consumer demand, this approach is quickly being abandoned.

“I think the fascination of Chinese people for Western brands is that they want the real stuff. That is the aspirational aspect of the product. If you make it too Chinese, they are not going to be interested,” he said. The influential editor of American Vogue, Anna Wintour, visited Beijing last month, telling local media that she wanted to experience China for herself so she could encourage US labels to boost their presence in the country.

Analysts say foreign brands have yet to even conquer major cities such as Beijing and Shanghai. They can then target the second and third-tier cities in the country’s vast interior — home to tens of millions of savvy shoppers.

“Expansion in tier two and three cities is one of the major strategic directions for all luxury brands, not just the leading ones,” Lannes said.

American designer Diane Von Furstenberg is venturing into China with shops in Beijing and Shanghai, and a retrospective featuring her sketches, designs and prints will begin in Beijing’s trendy 798 art district in April.

“I’ve always had this fantasy. I’d like to sell every Chinese a t-shirt,” she told the New York Times last month. Source: AFPrelaxnews