Marc Jacobs has responded to graffiti daubed onto the front of his Paris shop by Kidult by turning it into a T-shirt that retails for $686. 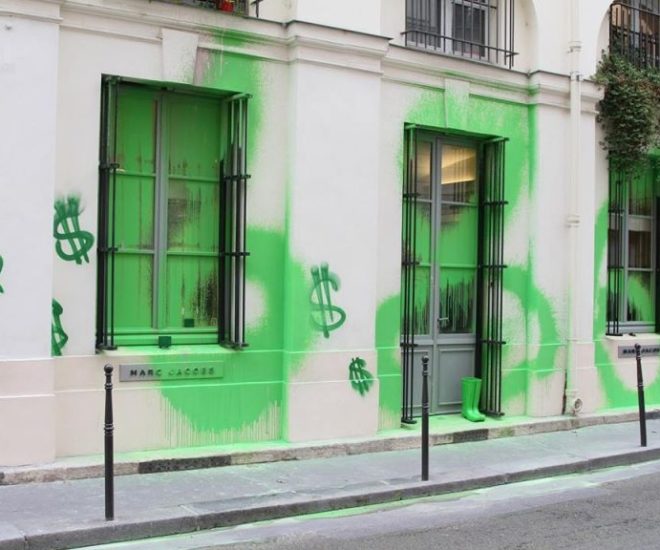 American fashion designer Marc Jacobs has turned a graffiti campaign by an anti-fashion activist into a pricey t-shirt. Marc Jacobs’s Paris store was the target of an attack by graffiti activist-artist Kidult.

The self-styled “visual dictator” took to Twitter to post an image of the freshly painted giant green “$686” and dollar signs he sprayed on the storefront, along with the commentary – “680? 689?…686?! How much are you going to sell this for? #kidultarmyparis #thisisnotart”.

Marc Jacobs reacted, of course, with a tongue-in-cheek endorsement: “Come by Paris Collection for the opening night installation of the new @therealkidult. We proudly support the arts,” they tweeted.

Cleary disagreeing with Kidult’s pronouncement that the tag wasn’t art, the brand posted an album on Facebook showing off the ‘collaboration’, and advertised the shirts with a photo of the tag, which have gone on sale in store for, you guessed it: $686.

It’s not the first time they’ve pulled the trick: back in 2011 Kidult sprayed the Marc Jacobs store in SoHO New York City with a giant pink ‘ART’ tag, which the designer prompty turned into a designer t-shirt that sold for the princely (and seemingly magic) sum of $686.